‘Under the Mistletoe’ | Justin Bieber 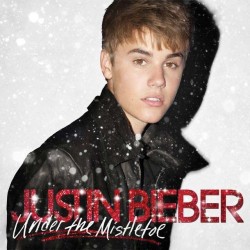 For fans of
Cody Simpson, Taylor Swift
Singles to download
“Drummer Boy,” “All I Want For Christmas Is You”

Justin Bieber recorded a Christmas album, and I can’t think of a better artist to release a Christmas album from a marketing standpoint. This will probably be the most popular stocking stuffer this year.

Despite my acknowledged status as a “Belieber,” I did not expect to like the album—and yet, I did. The first single, “Mistletoe,” despite sounding like a recycled Jason Mraz backing track at times, is catchy and fun. Bieber turns “Drummer Boy” into a rap song with Busta Rhymes, and it’s probably the best Christmas rap song ever created. Not that there are many. It’s insanely catchy, and Bieber shows surprising spitting talent for a white Canadian boy. He also encourages his fans to donate to charity in a rap. That’s pretty awesome. His duet with Mariah Carey on “All I Want For Christmas Is You” is actually strong, at least vocally. He recorded “Someday at Christmas,” one of the bonus tracks included with the deluxe edition of the album, a few years back, and that’s really all you need to know. It’s very small-Canadian-town-talent-show-sounding, in the best way possible. It’s vintage Bieber.

The weak points come on the some of the other duets. While I’m sure that teaming up with mentor Usher to cover Nat King Cole’s “Christmas Song” was great fun, the result pales in comparison to the original. The duet with The Band Perry, “Home This Christmas,” rings false as both their age difference and the idea that a 17-year old would be driving alone in a snowstorm are causes for concern. On “Silent Night,” Bieber’s voice goes so low that it almost sounds like he’s singing into a witness protection microphone that distorts his voice to sound like Darth Vader. These weak songs do not take away from a great album, though, and it’s one of the better Christmas albums released in the past few years.