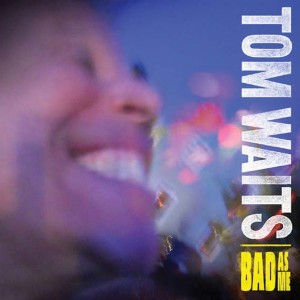 For fans of
Nick Cave and the Bad Seeds, Leonard Cohen, Antony and the Johnsons
Singles to download
“Bad As Me,” “Hell Broke Luce,” “New Years Eve”

Showman, street poet, soft-spoken ballad singer, shambolic bluesman—now that he is entering his fifth decade as a recording artist, there can be little doubt that the exhaustively dynamic Tom Waits holds a mythical status in contemporary music.

Waits’ last album of solely original material was 2004’s “Real Gone,” which featured some of his most innovative work to date, but it felt rather inaccessible at over an hour. “Bad As Me” is a welcomingly compact record in comparison and this is evidenced by the title track, a thunderous three minutes of grungy blues pop. The album’s standout, the ferocious “Hell Broke Luce,” may refer to the real-life story of Iraq vet Jeffrey Lucey, who committed suicide in 2004. Built around a backbone of clattering drums, echoing handclaps and ballsy power chord—with the ferocity helped by guest appearances from rock demigods Flea and Keith Richards—Waits spews out lines conveying an emphatic anti-war sentiment: “Listen to the general every goddamn word/How many ways can you polish up a turd?”

Tom Waits is certainly an acquired taste, especially because he doesn’t so much sing as growl these days. It may be advisable for newcomers to check out “Rain Dogs” and “Swordfishtrombones,” often lauded as Waits’ finest records, before delving into “Bad As Me.” But it won’t take much background listening to appreciate Waits’ world-weary delivery of the familiar refrain of “Auld Lang Syne” on “Bad As Me”’s final track, “New Year’s Eve,” which both perfectly encapsulates the uniqueness of Waits’ voice and brings this impressive record to a delicate, poignant close.