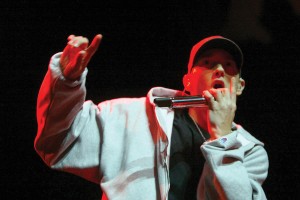 Eminem performs during the release party of his album “Relapse” in Detroit, Mich. in 2009.

Ah, it’s that most wonderful time of the year. The roads are all iced over, the birds absent from their trees and students everywhere are counting down the days until Spring Break. Yes, that means it’s time for the 53rd Annual Grammy Awards, broadcasting this Sunday at 7pm CT. Cadenza has winnowed down the 109 categories (scratch that, 108, they couldn’t dig up enough nominees for the “Best Regional Mexican Music” category) to the 10 most interesting, and we’ll let you know not only who will win, but who should.

HS: Was there a first part to “Airplanes”? “Telephone” should win.
Steve: I want to back “If It Wasn’t For Bad” by Elton John and Leon Russell. Russell’s worked with The Rolling Stones, Bob Dylan, The Beach Boys, Glen Campbell and George Harrison. He’s this old session musician who no one our age has heard of. He’s got this great twangy, country voice and is a good musician and the perfect complement to the flash of Elton John. Should we bash on “Airplanes” now?
SS: Worst song in the history of song.
PO: She’s singing about airplanes, and the stars, whatever.
SH: Exactly, Hayley Williams is singing like she doesn’t care. She’s like the Jay Cutler of vocal performances.
HS: She has the most annoying voice.
AT: And they met for the first time at the VMAS.
PO: It’s like Miley Cyrus saying she’s never heard of Jay-Z.
SH: I also want to rag on “Imagine.” Even though it’s exposing us to world music, and Herbie Hancock is a genius, P!nk is really annoying in that song. Her vibrato is everywhere. And, covering “Imagine” is like playing a retarded person in a movie.
SS: Stop.
HS: No, I know what you mean.
SH: No, no. You get automatic points for doing that.

AT: I think Beyoncé’s original version either won this last year or was nominated last year, so it’s like cheating.
SH: It’s hard to give it to either Katy Perry or Lady Gaga, because they’re so mechanically assisted.
HS: Especially Katy Perry.
SH: She’s mostly a cyborg. I think Norah Jones will win. The Grammys has a hard-on for Norah Jones.
HS: That album is good though.
SS: It is. It’s just frustrating that it’s so inevitable that she will win. So who should win?
AT: Sarah Bareilles
HS: It’s a stupid song though.
SH: Yeah, she’s not breaking any barriers. This is no Tennyson. But she does have a pretty voice.

SH: Should win?
SS: Florence.
AT: Drake.
SH: I’m going to throw my vote to Mumford & Sons.
HS: I would say Florence too.
AT: Bieber won’t win.
SH: I don’t see him lasting more than three albums. I think Florence & the Machine are a good choice; they and Mumford & Sons are never going to be nearly as popular as Bieber, but I think they’re going to have a legitimate greatest hits album.
SS: Drake is also really popular.
HS: He does write a lot of songs.
SH: He’s going to be a perennial “featuring” artists. We’re going to see “featuring Drake” for a long time.
HS: Who’s Esperanza Spalding?

SH: I looked up all the performers’ front men. Jeff Beck is 66. Matthew Bellamy, the frontman of Muse, is 32. Eddie Vedder from Pearl Jam is 46. Tom Petty is 60, and Neil Young is 65. So I’m throwing my support to Muse, because even if “The Resistance” wasn’t a fantastic album, they are the only people born within 10 years of me.
PO: And Muse is solid.
SH: They’re like a classical rock band. Their album is structured like a symphony.
HS: Do you think they will win, though?
SH: I think “The Resistance” should win. I don’t really care if anyone else should win. The Grammys need to move on from Neil Young. And I didn’t like Pearl Jam’s new album that much.

SS: Obviously, Kanye West is going to win. Or he’ll storm the stage. So, either way.
SH: But “Power” isn’t my favorite track, I think “Monster” is.
General consensus: Nicki Minaj is insane and awesome.
SH: Everyone should check out the Muppets cover of “Monster.” It’s hilarious. Miss Piggy in a leather biker outfit plays Nicki Minaj.
AT: Eminem might win.
HS: This is his comeback.
SS: The Grammys like comebacks.

AT: Gaga!
HS: She’ll probably win.
AT: I don’t think so. “The Fame Monster” was a nine track album, and the Grammys usually go safer.
SH: If you look at the past couple of years, the Grammy for best album has either gone to a pop performer, like Taylor Swift, or an older veteran, like Herbie Hancock. I think this might be the year they give it to an indie rock band. I think that Arcade Fire is good enough to get a Grammy and maybe shake things up.
SS: I’m just sad Katy Perry is even nominated.
SH: They’re just pandering because she probably has more fans than all of the other performers, except Gaga. Gaga should win, she basically compiled the last 60 years of popular music, distilled it and combined it with French classical music.

HS: This is where Arcade Fire’s going to win. I would like to see either the Black Keys or Broken Bells win.
PO: I love the Black Keys.
AT: Although, speaking of bad live performers, when they were here for W.I.L.D., I thought they were awful.
SH: Any of these albums are deserving except “Contra.” “Infinite Arms” by Band of Horses is a great album too.
HS: The Black Keys could win; some of their songs are on commercials.
SH: Did you see them on “The Colbert Report”? Stephen pitted them against the lead singer of Vampire Weekend in a sell-out off, which quickly devolved into fighting with chains.

AT: I hated Usher’s album. He sounds awful on “OMG” and he can actually sing. “Graffiti” was just okay. I’m tired of R. Kelly.
SS: Real talk.
AT: I forgot Ryan Leslie came out with an album. Janelle Monaé should win. She’s amazing. It’s one of the best contemporary R&B albums in a long time. It’s not just R&B, she combines a whole bunch of genres and does it beautifully.
SH: She’s got less name recognition than the rest of them.
AT: Yeah, I think either Usher or R. Kelly.

Record of the Year

AT: “F— You” definitely should win, but I think “Empire State of Mind” or “Love the Way You Lie” will win. Both of them were no. 1 for seven weeks, and they’re both really catchy.
SH: If there’s a complaint, I think it’s that the Smeezingtons did a good job with Cee Lo but this is actually the only track on that album that they produced.

For more heated debate, visit StudLife.com and look for Cadenza’s latest podcast, which has the full discussion (and a very special bonus category).