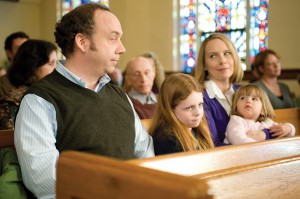 Win Win is about struggling attorney Mike Flaherty, played by Paul Giamatti, who works as a high school wrestling coach by night. Flaherty takes his client’s runaway grandson under his wing, he’s caught up in an adventure he never bargained for.

Kyle is an even-tempered, maybe even shy, kid, but he is not afraid to speak his mind. He’s always polite but not incredibly inviting. And yet, he’s everyone’s joy. Even as his introverted nature pushes people away, characters gravitate toward him because they see themselves in him.

Kyle (played by Alex Shaffer) represents untapped potential. He’s running from a troubled home led by a mom (Melanie Lynskey) who ducks in and out of psychiatric facilities. It’s too bad, because he was a fine high school wrestler, one of the best in the state, before he ran away from home.

Mike (Paul Giamatti) used to be an above-average wrestler when he was in school. Now he’s a high school wrestling coach and an uncommonly nice lawyer—with a few vices. He’s the kind of guy who buys a pack of cigarettes, smokes one, and then throws out the rest because smoking is bad for him. He’s the kind of guy who would provide a home for Kyle, even though the kid is a bit of an anomaly. But his children and his nosy, but well-intentioned, wife Jackie (Amy Ryan) warm up to Kyle’s blankness. As Mike’s assistant says, “He’s a nice kid. But what’s with his hair?” So Mike takes him under his wing and gives him something to do during the day: wrestle.

Director and co-writer Thomas McCarthy weaves the story around Kyle’s wrestling prowess. Rarely does the narrative delve into Kyle’s mind. For all we know, there could be a radio playing “Camptown Races” on repeat beneath his blond mop. McCarthy is telling us that it doesn’t matter what happens inside Kyle’s head. He’s guided by instinct. And the other characters start to resemble Kyle’s effortless demeanor as the film unfolds. Mike starts swearing to motivate his wrestling team. Mike’s friend Terry (Bobby Cannavale) hoots and hollers like an adolescent when he watches Kyle pin an opponent on YouTube.

When Kyle’s mom makes a gasping, dirty effort to recapture her son, the rest of the cast surrounds Kyle like a herd protecting its young from a predator. The shot is uplifting and a little funny, too, just like the rest of the movie. You realize that McCarthy has just directed the birth of a new family without having to explicitly address the symbolism, and his subtle touch is much appreciated.