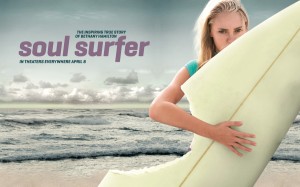 “Soul Surfer” has trust issues. For starters, it doesn’t trust its viewers to get the point of the story. The real Bethany Hamilton, a 13-year-old surfer from Hawaii, had her life derailed the day a shark bit off her left arm. She didn’t let the setback deter her from surfing, though, and she relearned how to catch waves and went on to become one of the best surfers in the world. It’s a story of resiliency and faith, and every character in the movie adaptation of Hamilton’s memoir knows it. But the script is unwilling to let the viewers figure this out for themselves, so the message is spelled out at every corner.

In fact, there are no “characters” in this movie. There are only soundboards. They pop up to congratulate Hamilton’s resiliency every few seconds, whenever the word “resiliency” has left our short-term memories. The film is singular-minded from the start, and there’s no room for growth. Like a magician who reveals the trick before the show, there’s no secret, so there’s no room for the viewer to discover.

And while the script force-feeds inspiration down the viewers’ throats, it also works pitifully hard to drive a contrast between before the attack and after the attack. The script wants so badly to make its viewers know that Bethany’s life was perfect before the attack that it even has her say, “We are the luckiest!” while fireworks fill the sky.

I can see a resilient character in Bethany Hamilton, but the acting holds her back. AnnaSophia Robb literally giggles (“tee-hee!”) while bikini-shopping, but as soon as she loses her arm, her character loses its humanity. Robb is a robot out there. There’s a glare plastered to her face, and her voice never exceeds a monotone.

For some reason, director Sean McNamara misses this perspective and directs “Soul Surfer” as if the story isn’t as uplifting as it actually is. He fills “Soul Surfer” with unnecessary flourishes that try to compensate for an imagined deficiency, like melodramatic musical cues and a scene in which Hamilton, unconscious after the attack, is surfing toward “the light.”

But this imposition is indicative of the movie’s larger problem: it doesn’t trust its story. To see the human spirit triumph in such a young individual is nothing short of a miracle, secular and otherwise. The real Hamilton has this great ability to inspire people to do something more, to be dissatisfied with being dissatisfied. But the film is, oddly enough, not as inspired by Hamilton’s heroism, evidenced by the characters’ dull reactions to Hamilton. “Go you!” they say. “You’re so strong,” they say…but how are their lives affected? They aren’t. The characters are all talk.