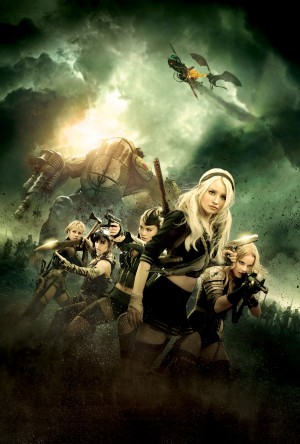 There are a lot of theatrical elements that contribute to making a good movie. Crisp pacing, believable acting and character development, for example, are pivotal. Unfortunately, for “Sucker Punch,” when you match up this movie’s traits with the ones listed above, nothing fits.

What could have saved “Sucker Punch”? A little thought would have gone a long way. If only Zack Snyder’s input weren’t so mindless and dull. You can trace my boredom back to his script, penned with Steve Shibuya, which treats the characters worse than action figures, because at least action figures can make different poses. They’re dolls. They’re all one-note characters, and, for the sake of convenience, they all hit the same note.

The protagonist, Baby Doll (Emily Browning), is unjustly thrown into a mental asylum. However, the fact that she imagines the asylum as a brothel does not help her sanity case. Baby Doll is tough as nails, but she’s made vulnerable behind bars. Her only friend, Rocket (Jena Malone), is a girl who is also tough as nails, but don’t let that fool you. She is quite vulnerable and also wants to escape so she can see her mom or dad or something. Alongside her sister Sweet Pea (Abbie Cornish) and two more random girls who don’t factor into the story at all (except for being tough as nails and occasionally vulnerable), she sits down to hear Baby Doll’s escape plan. Except Sweet Pea stops Baby Doll before she can explain. Sweet Pea argues that it’s not worth it to let their thoughts get tangled up in bad escape plans. But the next day, Rocket finally thinks of a comeback:

Well, that changes everything! And so they hatch an escape plan so stupid that it doesn’t even exist. Baby Doll says they have to collect four specific items, but she doesn’t know why. The movie is starting to drag, and for the sake of the plot, the girls accept it at face value. Here’s how it works: Baby Doll is going to dance for men that make up their imaginary clientele, and while they are distracted by her unenthusiastic swaying, the other girls are supposed to pickpocket them. Of course, that plot would only last 20 minutes, so the film jumps into the dancing Baby Doll’s mind, where movie clichés can serve as filler. With their samurai swords gleaming, the girls slay faceless orcs, dragons, robots and any other CGI scrap that Snyder and Shibuya can mine.

There are times when mindless action is OK; this is not one of those times. The fact that the action takes place in an imagined land within an imagined brothel during a lobotomy cripples the stakes. If Baby Doll gets punched by an orc, does it mean she tripped while dancing? And what happened to her in the real world? Picked her nose, probably.

There is a bit of good news, though. Jon Hamm cameos in the film’s last 20 minutes. Sorry if that ruins the surprise. It’s just that in all likelihood, you’ll need a pick-me-up at the hour-and-a-half mark.