‘Blue Valentine’ is not your ordinary love story 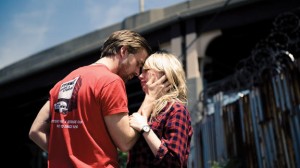 When I think of a love story, I immediately think of some romantic “Shakespeare in Love” or “Titanic” type of thing. I think of conflict breaking two people up before they eventually get back together. By the end, they might end up together or they might be torn apart by some horrible circumstance, their love forever living on through memory and passion.

Though Derek Cianfrance has done commercial and documentary work along with a few films that attained some success at festivals, his first big Oscar contender is “Blue Valentine.” It is another love story, but from its conception, it was obvious that this movie would not be typical in any way.

“Blue Valentine” chronicles both the end and the beginning of a relationship, the start of a romance between Dean (Ryan Gosling) and Cindy (Michelle Williams) and the fights that seem to doom it a few years later.

The film has been on the awards circuit for almost a year, appearing at Cannes, becoming a hit at Sundance, garnering nominations at the Golden Globes and being backed by one of the most reputable Hollywood firms—The Weinstein Company. Already, it was scoring some pretty major cinematic points—but it was not an easy road to get the film to where it is today.

I had the chance to talk to Derek Cianfrance when he answered questions for a few publications by phone. He spoke about how he considered stars Gosling and Williams co-writers of the film and how he had them withhold parts of their characters from the other so the camera would capture real emotion as they uncovered things about each other.

He also talked about his struggle to get “Valentine” to the screen. The journey started over a decade ago as he stood over a Xerox machine printing his screenplay, eager to mail it out to companies and get started on filming. Every company rejected him, thus beginning the third of his life spent searching for a way to get his film produced. After 11 years of financial woes and location confusion, the film was finally in production by the end of last decade.

Upon its release, “Valentine” was rated NC-17 by the Motion Picture Association of America. Cianfrance said the NC-17 rating normally goes to films that show too much adult content, but in his film’s case, he thinks “Valentine” made MPAA members feel too many adult feelings. In a way, he said, the rating is a sort of compliment to the film. “Valentine” handled its hard-hitting subject matter so well that its audience was left with such an indelible impression, the first instinct they had was that of censorship.

The film’s rating has since been lowered to R, standard for heavy relationship dramas. “Valentine” does not feature violence and has very few situations of nudity or sex, but it is still one of the most explicit movies of the new millennium. An honest depiction of the trials and triumphs of a modern relationship, “Valentine” stars Oscar nominees Gosling and Williams in roles that they both stood by for more than five years. And it’s lucky that they did; these roles were meant for them. The pair gives powerhouse performances, bringing every raw emotion of adoration and resentment to the surface. Indeed, Gosling and Williams—two of their generation’s best actors, if not the best—are reminiscent of a young Marlon Brando and Jane Fonda.

And though Cianfrance could be likened to Cassavetes, don’t let these comparisons fool you. This film is something new. The cinematography switches between close and cramped to spacious and wanting depending on whether the scene is in the past (when the couple met) or the present (when they are falling apart). The editing seamlessly makes this movie a duet, as Cianfrance wanted—the two separate parts, past and present, are both given equal footing in the viewer’s emotions.

The soundtrack is moody and breathes within the film, making wonderful use of Grizzly Bear’s song, “Foreground.” This is fitting, because this is a movie that has an excellent grasp of what should be in the foreground—the real moments. Whether they’re joyous or bleak, Cianfrance never shies away from displaying these moments with a candor more captivating than many more accomplished directors. His dedication to capturing the truth and his determination to recreate something real is what makes “Blue Valentine” one of the most striking, unnerving, touching, must-watch movies in recent memory.