Mirvish returns to Wash. U. to screen film 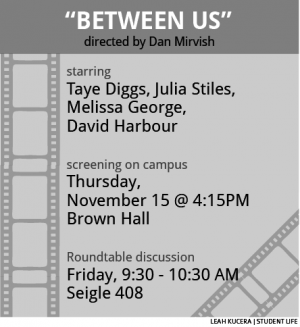 After years in Washington, D.C., Hollywood and Park City, Dan Mirvish is returning to St. Louis to show his fourth feature film. Mirvish graduated from Washington University in 1989 with a double major in political science and history. Now he is an independent filmmaker, writer and general polymath. I had the opportunity to interview Dan and learn about how he got to where he is today.

“When I was at Wash. U., there was no film program. There was one class on how to use Super 8 and there was one on the history of film, but that was about it. I took some summer classes at UCLA summer after freshman year. At Wash. U., I was always active in Filmboard, which was a lot of fun, pitching movies and that kind of thing, and we shot some original ‘coming soon’ and ‘no smoking’ trailers that we would play before each movie,” Mirvish said.

After graduation, he took his political science degree to Washington D.C., where he was a journalist before becoming a speechwriter.

He soon moved to Los Angeles to go to University of Southern California and get his film degree, and he released his first feature film, “Omaha (The Movie),” in 1995. He submitted it to the Sundance Film Festival.

“I had a distributor tell me point blank, ‘we love your film, but we won’t distribute it if you don’t get into Sundance,’” Mirvish said.

When it didn’t get in, he didn’t slow down, instead starting a renegade film festival called Slamdance with a few of his friends, running at the same time and place (Park City, Utah) as Sundance. Since its creation, Slamdance has had directors Christopher Nolan (“Memento”) and Oren Peli (“Paranormal Activity”) show their work.

“In 2008, I had another little project going in my garage which was with another filmmaker, Eitan Gorlin, and this was a series of shorts that we were pitching as a TV series about a character named Martin Eisenstadt,” Mirvish said.

Over the course of the election, the character became a McCain advisor, and it all came to a head a couple days after the election when there was a rumor that Sara Palin had thought that Africa was a country instead of a continent. Fox News had an anonymous source for the story, so Eisenstadt was given credit for it. Within a few days, Mirvish let the truth out and received a book offer from a publishing house.

“So we were presented with the option of not getting paid to not direct a movie or get paid to write a book. I…wisely chose writing the book,” he said with a laugh.

The book, “I Am Martin Eisenstadt: One Man’s (Wildly Inappropriate) Adventures with the Last Republicans,” was just recently released as an eBook after coming out in 2009.

“It’s this meta-memoir about his life and politics. We did very well with the book—it got great reviews, better than any of my movies had,” he said.

Mirvish will be in St. Louis for the International Film Festival, screening his newest movie, “Between Us.” An adaptation of a play, Mirvish had started working on it in the mid-2000s but took a break when the economy collapsed and ended up working on the Eisenstadt phenomenon.

“It sort of fit with where I was in my life, and so I got together with [playwright] Joe Hortua, and we collaborated on the screenplay adaptation, and the movie is really about two couples yelling and throwing things at each other. It hit at a good chord with me and I thought I could do a decent job adapting it. So we’ll see what people think,” he said.

“Between Us” stars Taye Diggs, Julia Stiles, Melissa George and David Harbour, and will be screened on campus on Thurday, Nov. 15 at 4:15 p.m. in Brown Hall. Mirvish will have a roundtable discussion about anything and everything Friday morning from 9:30 to 10:30 in Seigle 408.