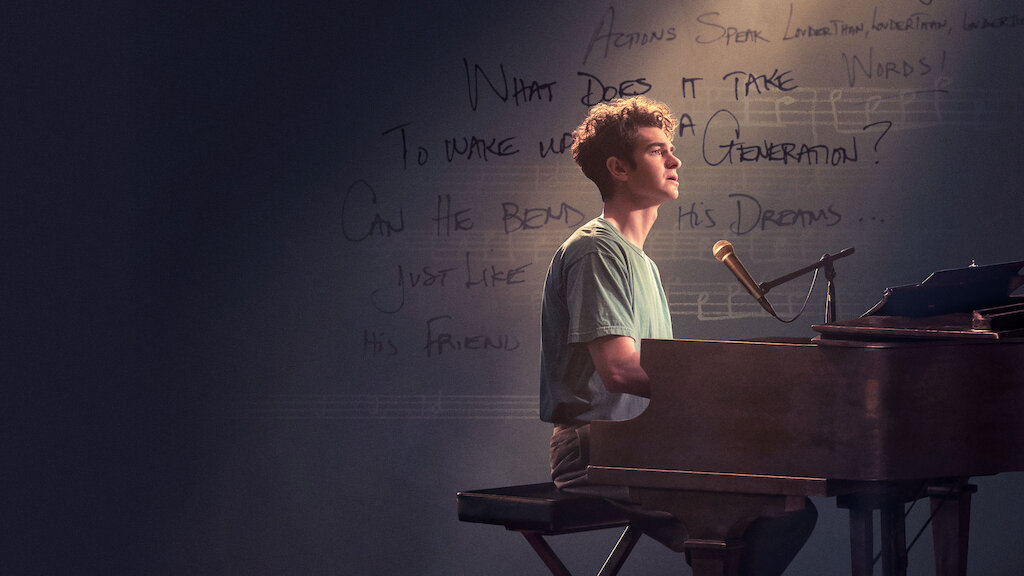 That flame gets closer and the ticking picks up throughout the film as Jon’s 30th birthday approaches. Jon has a workshop for his musical, “Superbia,” soon, and should it not succeed, he worries he will have nothing to show for himself at the end of three decades.

“Tick, tick … BOOM!” is Lin-Manuel Miranda’s directorial debut, an adaptation of Jonathan Larson’s autobiographical musical monologue. In it, Larson, the playwright behind “Rent,” tells the story of the events surrounding an earlier work of his. Jonathan Larson would eventually receive acclaim for his work posthumously, as he sadly passed away of an aortic dissection the night before “Rent” would premiere Off-Broadway. Combined with a wisely adapted screenplay by Steven Levenson and Andrew Garfield’s grounded, heartfelt performance, Miranda pays tribute to Broadway and captures the essence of Larson’s anxieties and ambitions.

Jon continues to narrate, beginning to tell his story to an unseen audience. Miranda uses Jon’s introduction of the narrative to add layers: Jon is performing for this audience, not just speaking, but singing at a piano alongside an accompanying band and vocalists. The musical performances move the plot forward and are cleanly cut together with scenes that provide context to Jon’s wavering state, both physically and emotionally.

Miranda makes surprisingly brilliant decisions for a first-time director, often finding unique ways to convey meaning or add color to his characters. At one point in the film, Jon struggles to write the missing song to “Superbia;” he heads to the pool to clear his head. Singing while swimming laps, Jon vents his thoughts before diving to the bottom. The lane lines turn into a musical staff as he finally realizes what to write.

The composition in Miranda’s shots, too, demonstrates confidence and cohesion. At the start of the song “Johnny Can’t Decide,” a sunrise reflects from the window onto a conflicted Jon, as the skyline contrasts with the writer’s dimly lit apartment. At the end of another track, “Therapy,” Jon and his love interest, Susan, argue in Jon’s apartment (itself dark and devolving, a depiction of the toll that writer’s block has taken on the protagonist). As intentions and motivations come to light, a car passes by, its headlights shining through the window onto the characters. The couple pulls away from their embrace, now farther from each other than ever before, as the music slows to an outro. In the showstopper piece, “Sunday,” Jon, working a shift in a diner, freezes time and manipulates the walls around him. Miranda draws upon his love of musical theater for this fantastical number in casting fifteen major Broadway performers as customers in the diner. As Jon walks outside, he is enamored with and empowered by the figures around him; he makes his dream a reality and conducts the ensemble that shaped his own affinity for writing and composing.

The direction, writing and editing are not the only highlights of the film. Andrew Garfield gives a dramatic and frenetic performance as Jon. The subtle arrogance and tragic naivete that Garfield brings to the role draws parallels to his Eduardo Saverin in David Fincher’s “The Social Network.” Obsessed with his work, Jon pushes his relationships to the wayside and neglects the people in his life calling out to him for help. As the workshop nears and the pillars of Jon’s life begin to crumble, Garfield encapsulates the writer’s nerves, pride, regret and determination in each scene and musical performance.

The team behind “tick, tick … BOOM!” proves the longevity of musical film as a genre. The film is set apart from other adaptations by not just replicating the original work but expanding upon Jonathan Larson’s vision. I highly recommend giving “tick, tick … BOOM!” on Netflix a look.