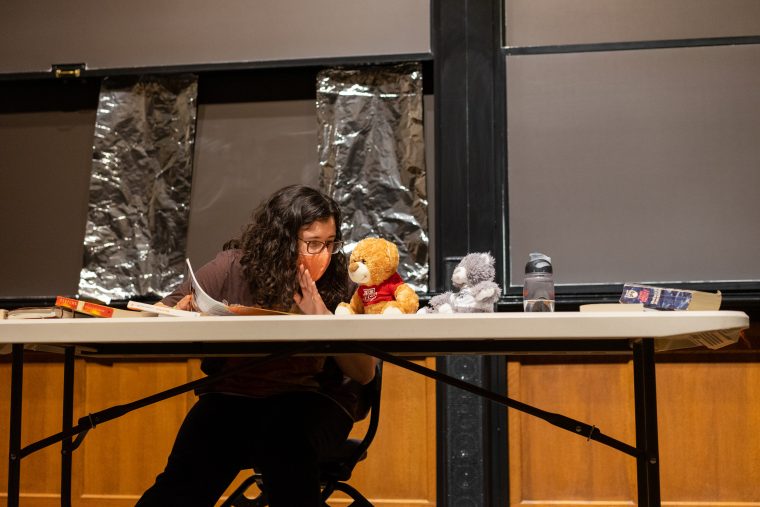 Twenty-four hours, especially for a student, can sometimes pass in the blink of an eye. There are Canvas modules to complete, presentations to prepare for, family to call, online shopping to do and crushes to text, not to mention that ever-growing semester sleep deficit. But, for a few intrepid theatre lovers, 24 hours is plenty of time to make something special.

Thyrsus is an experimental theatre group on campus that specializes in site-specific productions and student-written material. A hallmark of the Thyrsus campus presence is their annual Day of Shame, a 24-hour playwriting festival open to those with any theatrical background. In this edition of the Day of Shame, participants wrote, directed and performed four different short plays centered around the theme of a “galaxy-colored macaron.” The weird and ever-changing theme is one of the elements that makes the Day of Shame so unique, according to senior Reese Toomre.

“My favorite part of the whole thing is how you never know what’s going to be the theme when you show up,” said Toomre, who directed one of the evening’s plays. “I think the process of unpacking that is really fun.”

Experimentation seems to be the name of the game for many Day of Shame participants, who often take on new roles in the theatrical world as part of the event. Senior Ren Klein directed theatre for the first time during the festival, as they felt it would be a low-stakes way to try something new.

“I’ve directed film before, but never theatre,” said Klein. “This format really gives everyone the chance to take the pressure off. It gives freedom to be experimental.”

For others, the Day of Shame is a way to fit their passion for theatre into their busy lives, as it was for senior Alice Nguyen, who acted in one of the plays.

“[Day of Shame] is less of a commitment, and it’s a lot of fun! I really wanted to give back to the community and do some acting, which I love so much,” Nguyen said.

The audience seemed to share in the joy that the performers, writers and directors took in putting on their short plays. There was constant laughter at the witty writing and impeccable comedic timing. I found myself pleasantly surprised at how polished the final products were, especially knowing the state of my own writing done under a time crunch. Most importantly, at least to me, was that everyone was allowing themselves to let go and have some fun with theatre.