The final two productions in the Homecoming Voices collection, “Amateurs” and “Fear is a Gift,” take the stage with productions of vulnerability

As the final weeks of classes and campus life come to an end, I am proud to say that I finally acquired enough energy to watch a Wash. U. play. There obviously haven’t been many productions this year, but I’ve still been reluctant to watch the few that have occurred. I can’t get over how awkward I imagine them due to COVID-19 restrictions and the apparent obligation of the actors and writers to address “how theater has changed” or whatever.

While I don’t regret watching the last two Homecoming Voices productions, I must say, they were just as awkward as I expected them to be. Maybe this is because I haven’t seen a live performance in so long and I forgot what it was like, but I feel like the actors in both productions were overcompensating because of lost time on stage. For two very vulnerable plays, they both seemed so inauthentic.

The first play, “Amateurs,” was written by ‘00 Wash. U. graduate Nastaran Ahmadi and directed by Andrea Urice. This play tells the story of an effort to rekindle a relationship between a brother and a sister. Even though they seem to have a lot in common, they are very different people who live separate and distinct lives. Although there is deep-rooted conflict in the family, it is clear that similarities help the siblings understand and listen to each other.

I enjoyed the general plot of the play, and the outdoor setting really contributed to the natural feelings that were shared in the dialogue. I think it portrays the idea of the “simple life” that can be found in the secluded mountains and forest, but after learning the experiences of the siblings, the audience soon realizes it is no place for “simple living.” The script was beautiful and witty, but the execution wasn’t entirely there. Like I mentioned before, it felt like the actors were trying to compensate for the lost energy and artistic expression that was taken away during COVID-19. For a script that describes the exhausting lives of two characters who had just lost their mother, there was  an overabundance of cheeriness and animation; this just seemed out of place. 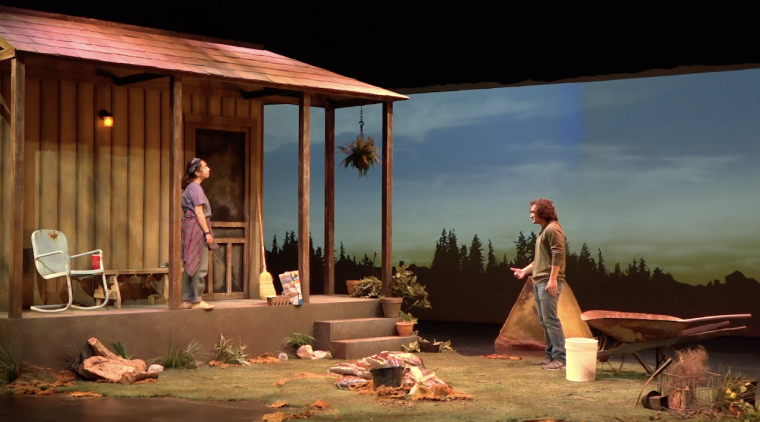 “Fear is a Gift” was written by 2008 Wash. U. graduate Liza Birkenmeier and directed by Jacqueline Thompson. This play allows the audience to watch the production and execution of a virtual haunted bike tour that turns into a haunted and deeply unsettling experience for the two hosts. While I didn’t totally understand the layout of the tour, I basically took it as a more interactive version of a murder-mystery podcast.

I think this play is supposed to have the trope of “quiet girl who is best friends with an overly perky girl,” and they definitely hit home on emphasizing this contrast. I was so annoyed by the character Savannah—the overly perky one—because she was so obnoxious that it took away from the haunted, fearful aspect of the play; I couldn’t even take her seriously when she had a mental breakdown. At times, this contrast was so ridiculous that I felt like I was watching a Disney Channel original movie.

Although this was an awkward production, the script still sounded organic. It didn’t feel like the characters were mechanically reciting it, but instead, it seemed like they had the freedom to improvise their lines. Because of this, the two girls’ conversations sounded more natural than if they had to hit specific lines at specific times. I appreciated this improvisational, conversation-like script.

Overall, I can’t say that I’m too surprised by my first experience back with theater. This may be an overdramatic bias because of how high my hopes were, but I doubt it will be an easy transition back into theater regardless.