The smooth and musical poetry of Arlo Parks’ “Collapsed in Sunbeams” brings listeners an uplifting yet existential perspective into the younger generation’s life. Through her unique expression of melancholy, she captures the feeling that many people in Gen Z experience: a response to criticism in an elegant and tasteful yet pointed way. The alternative indie/neo-soul genre fits Parks’ voice perfectly. Throughout her album, she takes moments to talk instead of sing, reinforcing the poetic aspect of her work. She first speaks so vulnerably in the album’s titular track, “Collapsed in Sunbeams.” There are two specific lines that encapsulate the essence of the album in her introduction–“Stretched out open to beauty however brief or violent” and “Making peace with our own distortions.” These truly reflect the authentic beauty that Parks’ album brings. 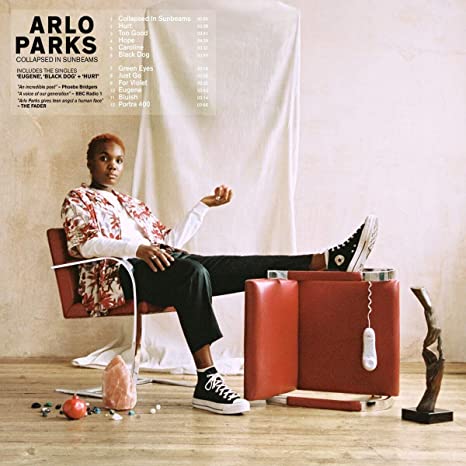 One cool aspect of the album is that there are instrumental low-fi songs at the end, which are perfect for studying. The flow from song to song is natural, yet each track still holds its own. I can confidently listen to the album all the way through without any skips, though I feel like “For Violet” hits a little bit of a lull. It prepares listeners for a somber ending, but for me, it isn’t in an ideal place. I would have preferred it being one of the last songs.

The front of the album definitely packs a punch. It brings a lot of energy, so I suppose it makes the ending intentionally conclusive. The best song is “Caroline,” as the outstanding chorus harmony showcases Parks’ vocal talent. This is true for nearly all of the tracks, but “Caroline” especially accentuates Parks’ storytelling.

In an interview in Genius, Parks explained that her music writing began by telling stories about people she doesn’t know. She would observe random people in the world around her and try to understand what they were experiencing. She told Genius that she “recalled this argument that I’d seen taken place between a couple on Oxford Street,” and she became inspired. She asked, “What caused it? Did the relationship end? Why was their relationship exploding out?” The song “For Violet” is another example of her reflecting on observations. Through storytelling, she captures emotions that strangers might be feeling and makes them universal.

Parks’ album gets a lot of its inspiration from classic rock and indie/alternative artists including Sufjan Stevens, the Beatles, Frank Ocean and Unknown Mortal Orchestra. This combination of artists is seen throughout the album, and her influences can be picked out and attributed to different brilliances. Although her album is very cohesive, she uses a diverse range of musical techniques that tune into different musical genres and eras. From the groovy and almost jazzy “Just Go” to the strings in “Black Dog,” Parks stays consistent in her cool softness. It never seems straining, and I think that was exactly her point.

Parks talks about very personal and sympathetic topics throughout the album. Probably the most sensitive track, “Black Dog” touches on her experience with depression. Not only does she talk about her experience of it affecting someone she loves, but also how hard it is to be the supporter. She knows it is hard, and “Black Dog” focuses on that feeling of seeing a friend in pain. Line one starts with “I’d lick the grief right off your lips,” and continues “It’s so cruel what your mind can do for no reason.” She sees the pain and wishes to help, but as a spectator can only do so much. This feeling of sympathy and innocent love carries throughout the album.

“Collapsed in Sunbeams” is a tranquil and pure interpretation of modern alternative, R&B and pop. Parks’ unique sound is good for the soul, and the lyrics speak to the realities of life, especially for those close to her age. Parks’ album was phenomenal and provided the support and understanding that many of us need right now.

Check out other Cadenza coverage of music on campus and in life amidst the pandemic:

The bops of our childhood, 10 years later

Back for more: A cappella returns after first semester hiatus