With everything going on in the world, it can be difficult to be creative and allow yourself the time to create. But that hasn’t stopped rapper and Washington University junior Zach Bernagene, who is better known by his stage name: Gosha Guppy.

Gosha released the music video for his latest song, “Blue Bandana Shawty,” on Friday, Dec. 4. The music video, shot in New York, proves that there is a place for creativity and creative outlets during the pandemic. It is fun and bright, and the song itself is a feel-good number. 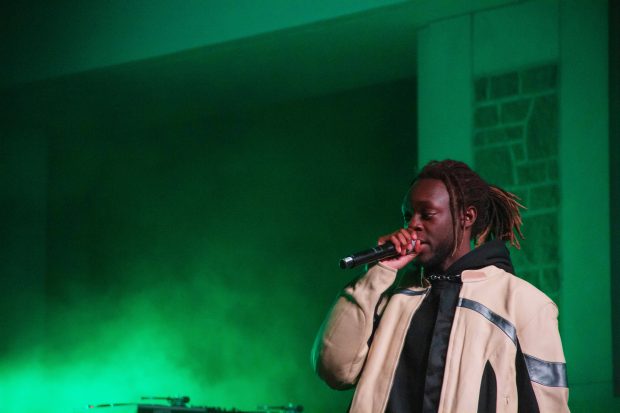 Gosha’s producer with the label New York Lab (NY Lab), Muhammad Elbadri—known as Pink Panther—is the one who came to him with the idea for the video, which was filmed in an ice cream truck, the NY Lab house and a New York deli. The ice cream truck is one of the more unusual locations for the music video. “[Elbadri] wanted to make sure ‘Blue Bandana [Shawty]’ has this icy vibe to it, especially because the intro is a bit colder. He asked, ‘How would it be for you to be in an ice cream truck?’” Gosha said, adding that he considered the idea a bit “absurdist.”

As far as the production of the video is concerned, Gosha feels like it proves that anything is possible. “With the right amount of planning you can do anything,” he said.

The song is just a sneak peek of what Gosha has been working on and is a testament to his journey thus far, which he characterized as being “filled with a lot of pauses and character growth.”

“Up to this point, I think that if I was going hard like I was back then [in high school] it would have corrupted me,” he said. “There are just certain things that you’re not ready for until you get to a certain age, like what I’m dealing with now in terms of the music politics would have been absurd for me as a 17 [or] 18-year-old kid, or even at 16 when I started rapping. Now that I’m 20, I have the ability to navigate the industry more and I have a team behind me.”

NY Lab has played a large role in Gosha’s success. “I think, obviously I’m reaching being signed and everything,” he said. “It’s helped me get to a point where I can comfortably feel like I can release music consistently.”

The label started off as a group of friends who would go to parties together. They began to notice things about the atmosphere and the music that they liked and things that they didn’t like, so they’ve set out to create change by taking the best parts of what they witnessed and bringing them together. In the eyes of the group, it’s less about the party and more about the music.

“We’re gonna do parties but we want to have this objective of pushing music,” Gosha said. “While the experience of a party is amazing, a good song is forever. I also think that in terms of where we’re at right now, I think it’s amazing that we’re all in college and doing this as a full-time job.” Guppy even mentioned the possibility of staying home in New York for his senior year and “grinding it out for real” depending on the pandemic.

As far as what’s next for Gosha, he was clear—global electronic dance music (EDM). “When an artist wants to maintain longevity they go pop, but I believe that dance music is actually global,” he said. “I think that that’s what we need to go back to, that’s the roots. I feel like music is a bit too robotic and not natural, it doesn’t have this good feeling vibe to it and that’s kind of what I want to bring back–this euphoric state musically.”

This sonic future isn’t far off for him either. His upcoming project, “Je T’aime,” is set to be released sometime next year, and he plans to release more songs before 2020 comes to a close. “It’s a mix between hip-hop and EDM,” he said of the project. “There’s trap elements to it, there’s dance elements, and what I’m doing is completely meshing it together and less of those two genres and the creation of another genre.” At its roots, his music is hip-hop, but the musical meld that he’s creating serves as a way to breathe new life into it: “I don’t want the death of hip-hop to be my generation,” he said.

Through musical innovation and reliance on the appreciation for EDM that sprouted in his early teens, Gosha Guppy is on a path to revitalizing hip-hop and putting himself on the map, but his vision for his career goes beyond the music. “If you’re going for broke [as an artist], you want people to fall in love with that art,” he said. As far as achieving that idea, Gosha believes he has the capability. His goal? Turning EDM into something that “everyone can and wants to [be a part of].” If his new music video is any indication of what’s next, then he’s on his way to turning his music into a lifestyle that established fans and new listeners alike will want to experience.