Let Him Go: Dark crime, drama, and a hint of poignance

Based on a novel of the same name by Larry Watson, “Let Him Go” tells the story of Margaret (Diane Lane) and George Blackledge (Kevin Costner), a married couple on a quest to retrieve their grandson from the clutches of a cultish family clan, the Weboys. Set in the picturesque American west, “Let Him Go” is as charming as it is grisly: viewers are lured in by the romantic landscape and wistful music, only to be met with brutal violence and bloody crimes committed in the name of family loyalty. With elements of horror and melodrama, “Let Him Go” is a gripping thriller and blood-curdler more than a tearjerker, although at times it attempts to become one. 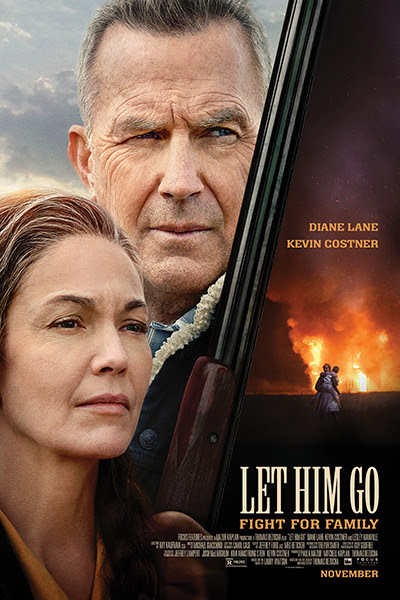 The official release poster for the movie.

After the death of James Blackledge (Ryan Bruce), George and Margaret’s only son, his wife Lorna (Kayli Carter) marries Donnie Weboy (Will Brittain), moving with him to North Dakota to live with his family, bringing James’ son with her. The Weboy family is notorious for their violent crimes and disregard for the law. Concerned about their grandson’s safety, George and Margaret head to North Dakotas in hopes of bringing the boy back. Their civil request meets fierce resistance, which quickly escalates into a bloody face-off.

Lane and Costner deliver stellar performances as George and Margaret. Desperate to keep the memory of their son James alive, the couple constantly make decisions that put themselves in danger, in a manner that straddles the line between heroic and reckless. Margaret, in particular, is headstrong to a fault and naïvely optimistic––a combination for catastrophe. And yet, it is perhaps this precise mix of reckless wife and loving, retired sheriff who should know better that makes this story possible. George and Margaret’s journey starts off a bit slow, but once the story gets going it is sure to shock and intrigue. The couple’s relationship also carries the emotional weight of the story, which unfortunately feels underdeveloped and outshined by all the drama.

The legendary Weboy family appears more like caricatures of thugs than real thugs. Ruled over by matriarch Blanche Weboy, the Weboy boys are little more than her puppets. They are the definition of mama’s boys, which is partly why I found them so laughable. The extent of their violence, however, is no joking matter. It is eerie and perhaps sobering to see this group of simpletons, downright boring white men who could be anyone, commit terrible crimes for no reason. But as villains the Weboys could do as well as any other.

In theatres November 6, “Let Him Go” is a dark crime thriller with notes of poignancy. Although the success of the film may depend on the audience’s expectations, it is sure to distract us from the drama of our current political reality.