With plans to stream remotely, KWUR isn’t pausing the music

When so much of college life is based on connecting with each other through shared, communal experiences, it’s hard to imagine campus life without normal extracurriculars. As students, it seems like there are no clear answers to any of our questions. What are hybrid classes going to look like? Where will I be able to study? Is Ibby’s doing pick-up orders?

KWUR 90.3FM Clayton—or KWUR for short—is one of the largest clubs on campus, with over 200 members and counting. Its members are passionate about underground indie music, bringing in guest artists for events and house shows and designing unique merchandise.

In past years, KWUR operated out of a studio on the third floor of the Danforth University Center complete with professional-grade microphones, streaming software built into the computers and a soundboard that DJs controlled during their shows. But, of course, this year will be different for KWUR and its members.

“We’re going to be doing remote broadcasting from each of our laptops,” said senior Avery Johnson, the general manager of KWUR. “It’s going to be kind of messy and we’ll be running limited operations, but it’s going to work.”

While KWUR is a radio station at its core, a large part of the club’s culture is house shows and live music events. Johnson explained that it is unclear whether there will be events and that the club’s executive board is “trying to figure out ways to live stream.” 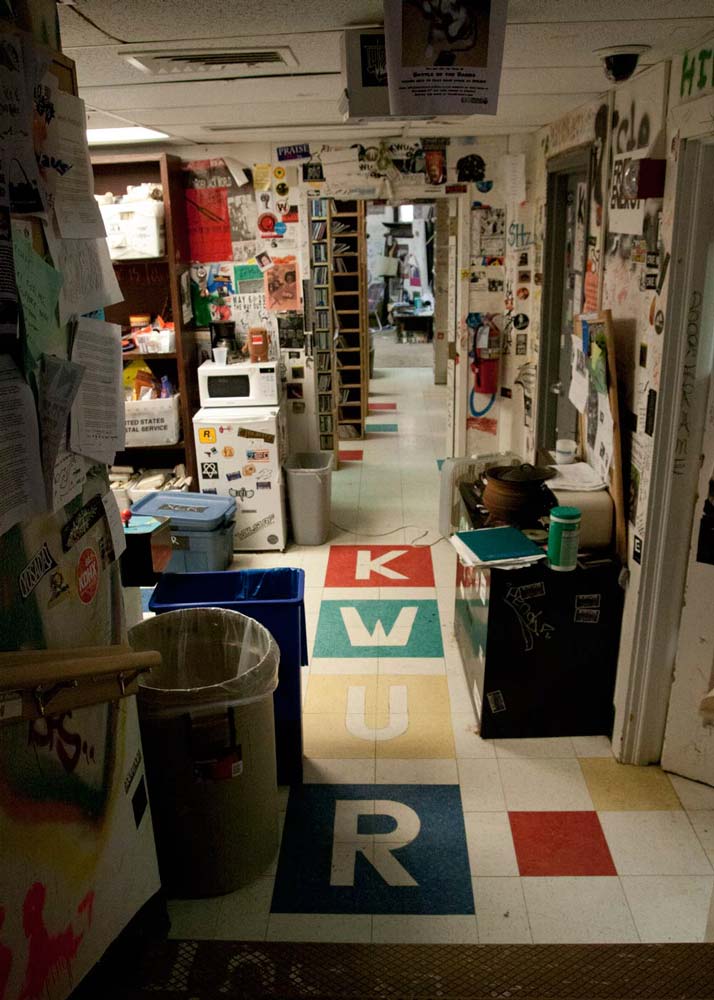 The old KWUR office in the basement of the Women’s Building. KWUR has worked out of the Danforth University Center since the early 2010s, but will be broadcasting remotely this fall because of the pandemic.

Sophomore and executive board member Jasen Vest assured that KWUR will “fulfill its duties of promoting and spreading music to its listeners.” “The community still exists and is in communication,” Vest said. “We plan on making online communication more accessible this semester, especially to freshman trainees.”

Like many clubs, KWUR still plans on recruiting and training new members despite operating remotely. Traditionally, anyone who wishes to join KWUR must be a trainee for a semester, learning KWUR’s rules and history throughout. After trainees complete their training requirements, they are promoted to DJs the following semester.

“Training will function a lot like it has in the past, but this year the introductory meetings and all of the requirements for DJ-ship will be entirely virtual,” explained Training Directors senior Tara Kilkenny and sophomore Camden Dyer in a joint statement.  “We’ve had to rethink some of the traditional steps of the process, but some solutions include a virtual tour of the studio, a one-on-one with a current DJ and remote CD-reviews.”

Overall, KWUR intends to continue operating as close to normal as possible. “There are still a few logistical issues we need to resolve,” Dyer said, “but we’re hoping to make training engaging and personal, especially given the relative isolation that festers in the dark recesses of a 50-person Zoom conference call.”