Silence on stage: A cappella put on hold

A few days before spring break, the triangle at the end of the Underpass was painted with an advertisement for an upcoming event. In red American Horror Story-style lettering, a cappella group The Amateurs advertised their March 20 concert, Goin’ Pro: An Amateur Horror Story. The Amateurs are just one of 13 Washington University a cappella groups, and nearly all of them had a concert scheduled for the weeks following spring break. Due to the coronavirus pandemic and campus closure, all of those concerts have been canceled.

The Sensasians had their concert scheduled for this upcoming Saturday, April 11. 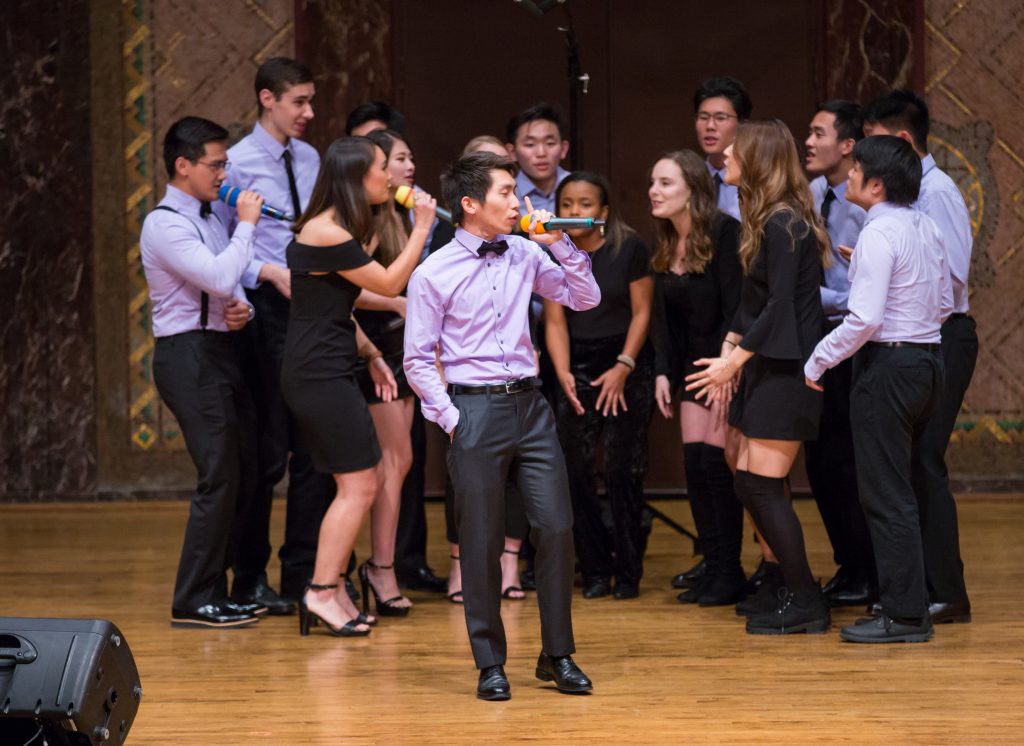 The Sensasians perform at Voices & Sounds during Parent & Family Weekend last November. Although their Spring concert scheduled for this Saturday has been cancelled, the Sensasians were able to perform at the International Championship of Collegiate A Cappella shortly before Spring Break.

“I deleted [the event] because it made me sad to look at it on my calendar,” Sensasian sophomore Dakotah Jennifer said.

Jennifer said she knew the concert would have to be canceled as soon as she saw the March 11 email announcing the transition to online classes.

“It was sort of something that we all sort of assumed, once we got the email that was like ‘Classes are going to be online until April 30,’ so we were all like ‘Oh, okay, no concert,’” Jennifer said.

Greenleaf sophomore Gracie Parker found out at the same moment. The Greenleafs had a joint concert with the Pikers scheduled for last weekend, April 3.

“We were just kind of hoping that we could still go back, but yeah, [I knew] when they officially canceled class and we couldn’t return to campus,” Parker said.

For Parker, the saddest part is the cancellation’s impact on seniors. “Our concert is also mainly for the seniors,” she said. “All the seniors get a senior song that they get a solo on, so it’s super sad that they can’t have that. And all our seniors are so amazing, like individually and as a group.”

Instead, the group has been informally recording a song as a sort of tribute to the seniors. Though not an official recording—Parker says it will likely be shown to the world via Facebook—the song is something she thinks will be “really special,” especially because they can no longer hold their concert.

Sensasian co-music director sophomore Lacy Wilder said their group also wants to do something for its seniors.

“We’re starting to brainstorm some stuff for a virtual senior send off,” Wilder said.

Still, the Sensasians have slightly more closure. Just before Spring Break, the group competed in the International Championship of Collegiate A Cappella (ICCA) in Springfield, Missouri.

“It was one of the best experiences ever,” Wilder said. “We didn’t place, but we had a blast.”

The Greenleafs perform in the E. Desmond Lee Concert Hall at the 560 Music Center to a sold-out audience for Voices & Sounds last November. Although now far apart, the members of the Greenleafs, as well as of many other Wash. U. a cappella groups, keep in touch over the internet.

Jennifer agreed. “We all had sort of like a road trip thing for all of us, which was super fun. And so I’m really happy about that, because we got to do that and then we didn’t get to do our concert, so it was sort of like a last hurrah, even if we didn’t know it.”

Back then, Jennifer said, none of the Sensasians even suspected the school cancellation that was less than two weeks away.

The groups have kept in touch over the period of self isolation.

“We’ve been Zooming, we Snap each other every day,” Parker said. “We’re definitely still keeping in contact. It’s definitely an amazing community, so we all still keep in touch.”

Wilder said the Sensasians have been doing much the same thing. “We’re super close so we’ve been having weekly Zoom hangout sessions and playing a lot of Bitmoji Party on Snapchat,” Wilder said.

Jennifer echoed her sentiment. “We all sing, we all perform, but we are all really good friends, like we are each other’s friend group.”

When asked about the Pikers’ plans for the rest of the semester, sophomore Louis Gordon, who responded to questions only with jokes, said that their plan had been to “hold hands platonically.” One can only assume they now Zoom platonically.

The distance and reliance on technology like Zoom does make singing more difficult.

“It’s been hard to coordinate anything, especially because singing when we’re all separated is really hard,” Parker said.

But Jennifer and Wilder don’t foresee any problems in the fall semester. “The things I’m most worried about are logistics and trying to get back into the swing of things, but also I’m not super worried,” Jennifer said. “We always have the summer as a block of time where we don’t get to see each other, so I think we will have to recollect ourselves in the fall instead of doing it in the spring.”

Wilder also said there should be no problems, as preparing for auditions in the fall can easily be done virtually. In regards to the music arrangements, Wilder said “We just need to decide if we’re still going to perform our ICCA set [the plan for the April 11 concert] now that seven people have graduated and we’ll have a lot of new members.”

Parker also said The Greenleafs’ set would likely change. “A couple of the songs were songs that we’d reused from previous concerts that the seniors were singing for the nostalgia, so I don’t think we’ll use those ones. A couple of the seniors did arrange new songs… I’m not sure if we would use those next year.”

Ultimately, the biggest issue the groups face is the loss of their annual concert.

As a first-year a cappella member, Jennifer said “it’s weird” to face this during the first year she has been involved with a cappella.

“I feel bad for our group along with all the other groups on campus that have been putting in a lot of work for the concerts, because it’s sad to not see the outcome of that,” Parker said.