When I walked into Edison Theatre Friday night, I saw that most of the theater’s seating had been blocked off. Instead, bleachers rose from the stage itself, filled with folding chairs and enough room to seat about 60 people. “Men on Boats” was not to be a story viewed from a distance—the audience was right on stage with the performers, drawing us into their story. 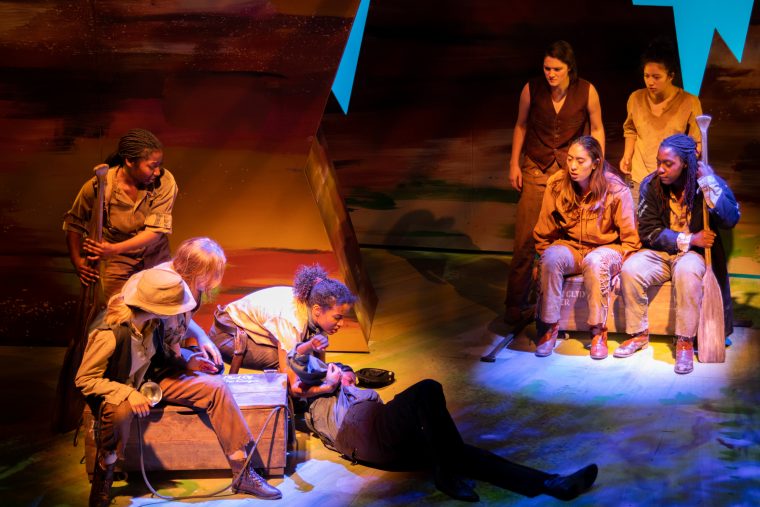 “Men on Boats” tells the story of John Wesley Powell’s expedition down the Colorado and Green Rivers. This expedition was not made up of the first people to ever travel through the Grand Canyon, or even the first Europeans—the novelty of this journey is that Powell’s expedition was the first to be sanctioned by the US government. This is something the play doesn’t let us forget, with frequent references to the area’s Native American and Mormon settlements, as well as a previous expedition led by someone named Ashley, which ended disastrously. All of these references are followed by a long pause and a pointed look to the audience, breaking the fourth wall.

The play also critiques the process by which history is formed. Powell, the leader of the expedition, published his account of the expedition and is the one history remembers. Geographical features in the western United States bear his name. The other eight people on the voyage? They weren’t so lucky. “Men on Boats” shows just as much, if not more, of Powell’s crew than Powell himself. This isn’t the story of John Wesley Powell (second-year master’s student Kyliah Thompson), one-armed war veteran and enthusiastic explorer. It’s the story of the Howland brothers (sophomore Jenise Sheppard and senior Lucie Kirk), who are fiercely loyal to each other and steal tobacco at night. It’s Frank Goodman (senior Sarah James), a rich Englishman whose accent is just as hilariously unrealistic as his desire to go on a fun, safe adventure and George Bradwell (freshman Sarah Del Carmen Camacho), a talkative teen nervous to be on his first voyage. It’s Walter Henry “Old Shady” Powell (junior Naomi Blair) and John Colton Sumner (senior Madison Lee), who have little patience for the antics of their crew, William Hawkins (junior Alisha Duvall), the patient camp cook, Andrew Hall (senior Taya Bokert), an enthusiastic but meek mapmaker and William Dunn (first-year master’s student Maddie House-Tuck), the only one who will challenge Powell’s authority.

The casting reflects this broader focus: Though everyone on Powell’s crew was a white man, the casting calls for people of color, indigenous persons, women and gender-nonconforming actors. History is written by powerful white men, the play says. These are the people who have been left out.

That’s a lot for any play to tackle, but “Men on Boats” doesn’t shy away from the challenge. It succeeds in being everything it tries to be: funny, touching and a social critique. All the characters spoke in modern language, using current slang in the 19th century West, and it doesn’t feel unnatural. There are no boats, only wooden chests the actors sit on or near, rowing through the air, but they feel enough like boats that I started to forget they weren’t actually boats. It’s a testament to the acting, lighting and scenic design—Wash. U. alumnus Emmett Grosland abstractly painted orange-red-purple jagged rocks and a blue-green floor, with swirling lights to mimic water—that groups of actors sitting on a box and screaming captured the danger of running over a waterfall, and that rolling on the floor and yelling effectively simulated having a man overboard.

Not that much happens in this play. A group of explorers go down a river with increasingly large rapids and rapidly dwindling food. Some people stay; some people leave. A weirdly prophetic fisherman foretells their coming historical obscurity. The play’s main focus is not the plot but its characters, and therein lies its strength. There is the danger of starvation, but the play shows this through the way each of the crew reacts to the food quickly running out. By the end of the play, we have gotten to know each of these crew members. We remember them even when history hasn’t.