The band behind Brasshouse: A conversation with Too Many Zooz

The music video opens with a black screen and the text “03:33 AM, Brooklyn, NY.” Soon the shot cuts to a bass drum, adorned with a tambourine and cowbells, immediately releasing a high-intensity beat under frantic drumsticks. The camera quickly moves backward to show the drummer on a train platform, whose smile peeks out from under pink clout goggles and a matching pink hoodie. I’ll later learn that he goes by the name “King of Sludge.” For the next few seconds, it seems he is the only one on the platform, and the trains gliding in opposite directions on either side of him make for a surreal background.

However, as the camera continues receding, a high-pitched growl is heard, and its unlikely source suddenly comes into view: another man in pink shorts and green glasses, wielding a baritone saxophone. This is Leo P., the undeniable frontman of the group. His feet will shuffle and kick for the entirety of the song, despite my own two years playing baritone sax telling me it isn’t possible to dance while surrendering so much air to the giant instrument. 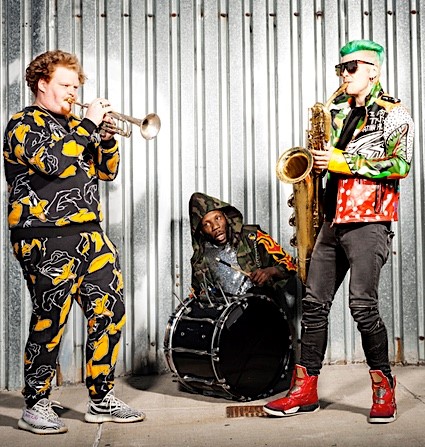 Too Many Zooz is an instrumental group that formed in the New York subway. The group is known for their energetic and eclectic style of music self-dubbed as “brasshouse.”

The camera finally reveals a trumpet player in a pink hat and psychedelic cat T-shirt. Matt Doe’s bright, pulsing melodies round out the trio; no singer is needed. For the next five minutes, without any pauses, the band members play with an energy that is impossible not to dance to, their song a seeming mix of EDM, funk and Afro-Cuban rhythms. When one train stops at the platform, the trio boards it and continues playing for a shocked audience, maintaining their intensity until they get off at the next stop.

This video of their song “Bedford” was my introduction to the band Too Many Zooz. And today that may be the most authentic possible starting point for new fans—the group formed in the New York subway system and recently blew up as a result of a viral video of one of their busking performances. In the last five years, Too Many Zooz has released four EPs and one album, and the group’s first world tour has a stop this Friday at Off Broadway in St. Louis.

As for their multi-textured music style, King of Sludge has coined it “brasshouse,” and Matt best describes the style as “a high-energy musical conversation.”

To better understand this new genre and the unique style of Too Many Zooz, Student Life caught up with Leo P. as the band prepared for a show in Brooklyn.

This interview has been edited slightly for clarity.

Student Life: What’s the songwriting process for the band? How do you practice together?

Leo P.: We started off practicing in the subway together, writing our songs as we played them, [like] an improvisation. But now we record and rehearse in all these different ways. Sometimes we just improvise on stage, and write songs that way, and sometimes we use a studio and write pieces out first. Basically we just try to be creative and do it a bunch of different ways.

SL: You started off playing in New York City subway stations, and now you’re on a world tour. Has the experience of performing changed?

LP: Yeah, totally. When you play in the subway, you just need to entertain people for a few minutes. So in that way, it’s just a fast burst of energy and there’s really not that much pressure, as opposed to somebody who pays money to come to see you, and you entertain them for an hour and a half. I feel like there’s a lot more pressure, you know, in making sure people are left satisfied.

SL: The band is recognizable for your tendency to dance while playing a bari sax. How do you have the lung capacity for that?

SL: Did dancing or saxophone come first for you, and how have they evolved together?

LP: I always danced for fun, but I never really took it seriously. Then when I started playing saxophone, I took that seriously. I didn’t do them at the same time really until I started working at Carnival Cruise Lines when I was 18. That’s when I first started dancing, and I just noticed that people liked it. Then when I started playing in the subway, I just noticed people stayed more and paid more money when I danced, so I just kept dancing.

SL: Due to the unique style of Too Many Zooz, have there been any challenges in working with other artists or featuring singers and rappers?

LP: Yeah, we had singers and rappers on our album “Subway Gawdz,” but we like to keep it mostly instrumental. And that’s because people get all offended by words, you know, and they don’t get offended by notes at all. That’s kind of the beauty of instrumental stuff. It’s impossible to offend anyone.

SL: If this isn’t too grand of a question, what does music mean to you?

LP: Music is life, if that’s not too grand of an answer. It means everything to me. It’s my reason for living. Everything connects to music. It can affect my mood, or a lot of times it can bring out a mood that I need to express or feel.

SL: Who are your musical and non-musical inspirations?

LP: Musical inspirations: As far as sax players, probably Ronnie Cuber, John Coltrane…Throw Michael Jackson in there, and Busta Rhymes. And then non-musical: There’s so many. Jeremy Scott, he’s a fashion designer. Maybe Luke Skywalker. And Prince, for both musical and non-musical [reasons].

SL: Can you talk to me about your fashion style? How did that develop, and are you taking that skill anywhere else?

LP: I want it to go somewhere else, I just haven’t put in the time to make it go somewhere else. I just like dressing myself and have fun buying clothes and stylizing people. Basically it’s just really fun, putting on different clothes, trying different styles, and to me it goes hand in hand with performing. And I’ve always been into musicians that know how to dress.

SL: In your solo in the “Car Alarm” video, you play with only one hand and gesture with the other. Are you ever thinking about speaking words when you play, or is it more of a style?

LP: Well, I’ve rapped before and I like rapping, but I can’t say any crazy stuff that if someone were to take seriously, it would just be not good. So, it’s just what naturally comes out of me. I don’t know exactly what I’m saying when I play.

SL: If the three of you were doing something together besides music, what would it be?

LP: Probably we’d be doing sports analysis, just have a podcast or a current event[s] type [of] thing. We all like basketball. Maybe we’d be in…I don’t know, a food truck.

SL: Is there a message you want to leave your listeners with?

LP: Just follow your passion. Don’t let the past get to you, and if it does, just move forward in the direction you want. And have a vision of who you want to be.

Too Many Zooz will perform at Off Broadway Friday, Feb. 7. Doors open at 7 p.m. and the show starts at 8 p.m.