Jamming with Jammin’ Toast: Laughing with the Pikers

Jammin’ Toast, The Pikers’ annual concert in Graham Chapel, is more than just a concert. It is a film screening, a comedy show and so much more. 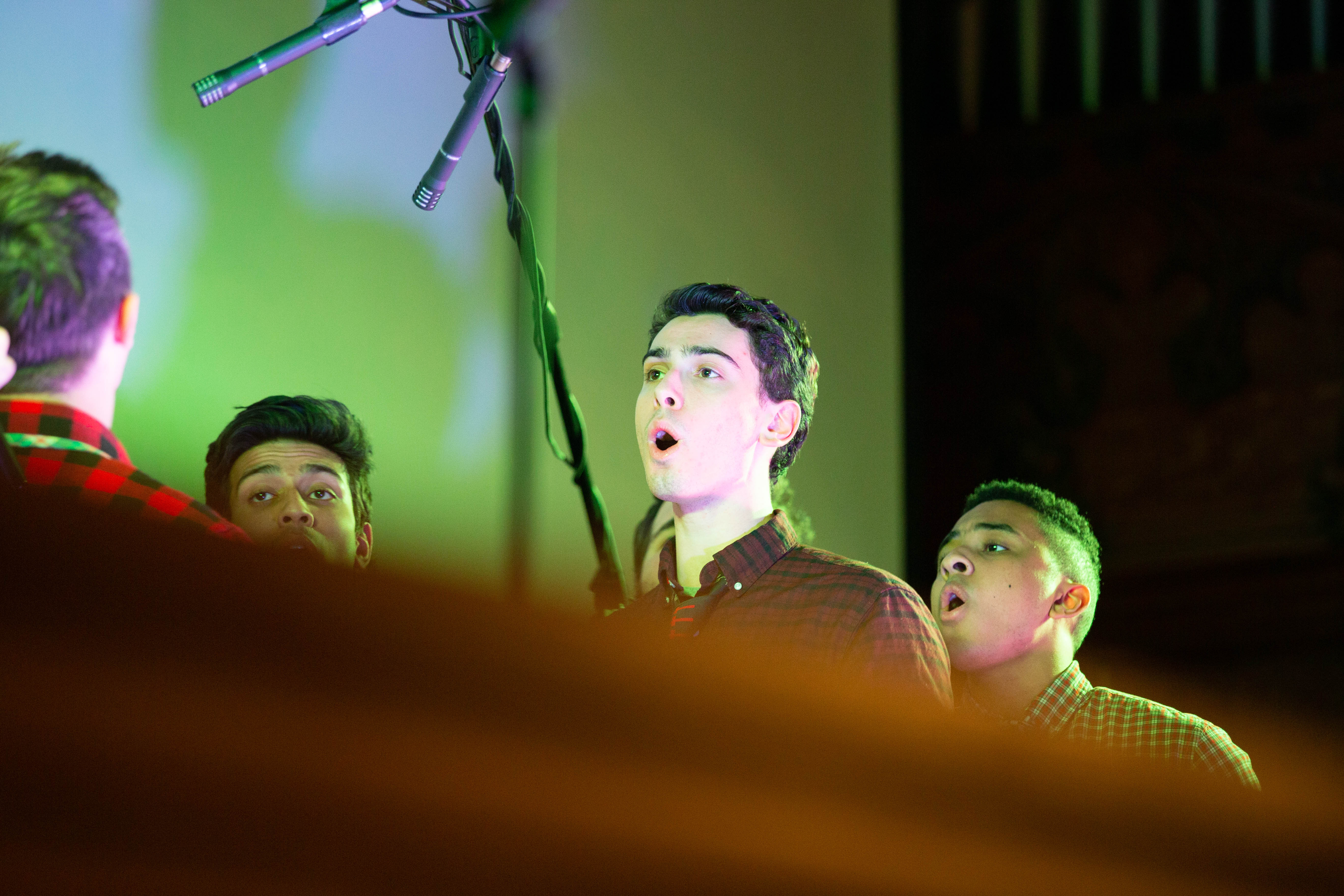 This year was the 35th anniversary of Jammin’ Toast, and for such a monumental occasion, Pikers alumni assisted their former a capella group in creating what the Brexit-themed Facebook event—titled “A Hard Pexit”—promised would be a show “so ludicrous and offensive that the ACAC (A Cappella Advisory Council) [would] be forced to unilaterally expel The Pikers from this so-called ‘Advisory Council.’”

If you’ve never attended a Jammin’ Toast, here’s how it works: The Pikers film a short video (around 30 minutes long) that is played in two parts—the first before the first song and the second immediately after intermission. The video is a way to make fun of nearly anything and everything Wash. U. That humor isn’t something that starts and stops when the film does, though. The Pikers find a way to make everything a joke, often at the expense of their singing being nearly drowned out by the audience’s laughter.

While the audience seated themselves, The Pikers played a slideshow of themselves full of “stimulating” trivia and depictions of The Pikers as subjects of famous art pieces, such as a photo of the “Christ the Redeemer” sculpture in Brazil captioned “The Pikers Bring the T-pose to the New World (1492).” As for the facts, the audience learned that The Pikers “DO NOT commit tax fraud” and they repeatedly denied their involvement in the 2008 recession (this fact was stamped with an Olin Business School logo).

When Graham Chapel was full of students, parents and Pikers alums, the lights went down and the video started playing. This year’s video was a sort of heist movie. Its plot involved the starring Piker—senior Nathan Marak playing Spanks McGee—getting advice from the mysterious figure Johnny Piker on running for Student Union president to save The Pikers from the tyrannical arm of student government. The video took shots at everything and they were, without fail, hilarious. Highlights included: a depiction of the SU president—who had an army of blue-masked henchmen—dying at the end of the video from the medical condition of “being the absolute worst,” jokes about StudLife’s reporting standards and digs at Pete Buttigieg.

This energy bled into the rest of the performance. The Pikers’ first song, “Everybody Talks” by Neon Trees, was overwhelmed by jokes about the business school curriculum (a Piker spent the song answering questions like 7+4 on a notepad). The singing itself was impressive, but the combined laughter of a full Graham Chapel threatened to drown it out.

In this environment, The Greenleafs’ performance stuck out in particular. Instead of The Pikers’ signature plaid and horrifically mismatched ties, they wore smart black dresses. There were no jokes, and their set, which included Bishop Briggs’ “River,” seemed designed for the wow factor—the soloists were impressive and the arrangement supported them beautifully. Later in the show, The Greenleafs took the stage again, this time clad in Pikers gear for a joint song, “Genius” by LSD and Sia, and once again sang beautifully. The two groups worked together well, and the steadily increasing amount of members of the arrangement wearing Bernie Sanders wigs and glasses served as the song’s only joke, meaning that the music alone filled the chapel.

For the rest of the show though, the music competed with the audience’s laughter. The Pikers performed a rendition of “Sky” by Birds of Bellwoods that still managed to convey the song’s emotion despite the alums wearing assless chaps introducing the song and the slideshow of “Collin’s photography”— the Windows desktop image, Minecraft screenshots and a succession of images from NASA— onscreen. The soloists ended the song on a melancholy note, with no backing vocals and a photo of the Challenger explosion on the screen behind them. In their version of “Mime” by Isaac Dunbar the soloist, freshman soloist Alex Chang never missed a note even as his face and leg were licked and humped by a man in a Chewbacca onesie.

Their performance of Billie Eilish’s “Bad Guy” still managed to be creepy and catchy even as photos of fictional and real-life bad guys—people like Kim Jong Un, Vladimir Putin, former chancellor Mark Wrighton and one picture of Pete Buttigieg that kept zooming further in on his nose—played. The arrangement for “Colder Weather” by the Zac Brown Band was stunning, even though the song seemed to be an excuse to make “climate change isn’t real” jokes. Junior soloist Max Klapow’s performance nearly brought a tear to my eye, though that could have been influenced by the “seals are thirsty for crude oil” sign that was held up behind him.

The last three songs—the “New Guy Song“ (a mashup of Avicii’s “Hey Brother” and “Wake Me Up”), “Flaws” by Bastille and “All the Pretty Girls” by F.U.N.—were beautifully performed. The New Guy Song worked despite there only being four performers, and the others featured soloists and arrangements I can only describe as stunning. By the end of the last song— and by the end of the encore, Irene Cara’s “What A Feeling”— the audience was clapping along and dancing in their seats.

Whether or not Jammin’ Toast is truly about a cappella is debatable, but one thing is certain. A good time was had by all, and I left Graham Chapel laughing.