Everyone dreams of making magic happen. At Disney, magic is an everyday occurrence. Growing up, fairy tales and Disney movies were a large part of my childhood, and today they bring back fond memories of simpler times. For Wash. U. alumna Elana Lederman, class of 2013, those memories are made everyday.

Lederman graduated from Wash. U. with a degree in Mechanical Engineering and a minor in Visual Arts. She’s now an effects artist for Walt Disney Animation Studios. She worked as an effects artist apprentice on the movie ‘Frozen 2’, which premieres Nov. 22. Lederman spoke to Student Life about her time at Wash. U., her journey and what it’s like to work for Disney.

When asked what, if anything, at Wash. U. prepared Lederman for her career at Disney Animation, she responded, “I loved art but I didn’t want to be a fine artist…I was interested in [math, science and physics] so I studied engineering and I found that wasn’t quite right for me.”

It wasn’t until Lederman’s senior year, however, that she really began on her path to be an effects artist at Disney Animation. “My senior year I took a class that was basically Intro to Animating with [Sam Fox Senior Lecturer] Jon Navy, and as soon as I took that class, I said ‘I have to do this. This is exactly what I’ve been looking for.’”

If it wasn’t character related, Lederman had a hand in it. “My day to day life was working on different shots…I worked a lot on destruction, smoke elements [and] some of Elsa’s magic, so the hours [were] spent sitting at my computer and figuring out how they’re going to look and work in the scene, showing my work to supervisors, trouble-shooting problems and showing [it] to the directors and [seeing] what they liked and what they didn’t like.” 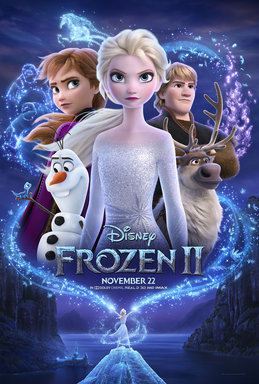 The apprentice program at Disney Animation that Lederman was part of is for recent graduates who have some industry experience. It offers them the opportunity to come to Disney and spend time learning the ins and outs with mentors in their preferred department. The effects department mentors initially give their apprentices projects that were unrelated to any movies undergoing production so they could have learning experience; once they were past the first few months of just learning, they moved on to working on the film shots just like any other effects artist at Disney. “It wasn’t just like we were given the tiny shots that everyone ignores,” says Lederman. “We were given real work, which for me was the greatest part about it.”

Working for Disney sounds like a dream come true, and for Lederman, it is. “The work itself is so rewarding…Just the culture that we have—people are very friendly and they really take learning very seriously here. We have opportunities to take art classes that are maybe outside of our own specific specialty and we get to see movies from both our company and other companies, lectures by other people in the industry. It’s unlike anywhere I’ve ever been.”

“Frozen 2” goes more in depth into the origin of Elsa’s magic powers, as she goes on a journey of self-discovery with the help of her sister Anna, Kristoff, Sven and Olaf to learn whether she and her powers are enough. “Frozen 2” opens everywhere in theaters Nov. 22.