The weather up here: A tall girl’s opinion on ‘Tall Girl’ 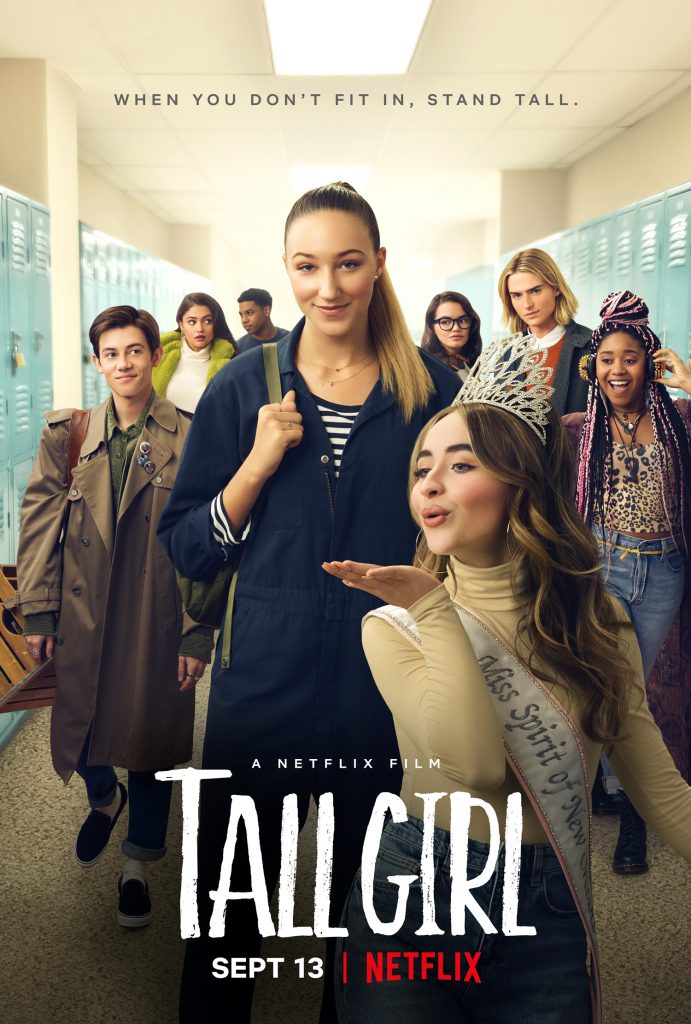 When Netflix dropped the trailer for the movie “Tall Girl,” my Facebook notifications jumped, with more than a dozen of my friends alerting me that a movie “for me!” was finally being released. At 5’10”, I’m not the outrageous kind of tall, but rather the kind of tall that always puts me in the back row with the boys for school photos. The kind of tall that gets questioned when I wear heels (“You don’t need them!”) and the kind of tall that had to bend awkwardly at the hip in my prom photo to appear the same height as my date.

“Tall Girl,” written by Sam Wolfson and directed by Nzingha Stewart, is essentially a movie about a 6’1” teenage girl named Jodi, whose wardrobe seems to consist of gray sweatshirts and other clothes that scream, “I’m invisible.” Her male best friend, Dunkleman, is short and spends the entire movie trying to convince Jodi to date him instead of the new Swedish exchange student, Stig, a gloriously tall and comically handsome alternative.

The filming of the movie was, in a word, bizarre. The entire cast seemed to be shorter than Jodi, who, at 6’1”, really isn’t as much of a freak of nature as the writers want her to be. The camera angles make her seem like an alien, shot from below or above to exaggerate her height. Jodi’s classmates make creative insults, including “How’s the weather up there?” and “Hey, Sasquatch!”

As these insults would suggest, the writing was probably the weakest point of the film: clunky, awkward and painfully obvious that it was done by an adult. Being the “tall girl” in high school is a very specific and discerning experience that not even all women fully understand, so how did Wolfson expect to capture that? The growing pains of feeling like you’re too tall to be desirable, or having a fear of heels? I finished the movie wondering if Wolfson has ever met a tall woman…or even just any woman.

The message of “Tall Girl” is confusing at best and offensive at worst. It seems that the film wants to say that you should accept your body and live your life, no matter what other people tell you. So why does it simultaneously promoting fat-shaming ideas? Jodi’s older sister Harper—who apparently got the “normal” genes and is somewhere around 5’1’’—is a pageant queen, beautiful and apparently accepted by all. But like Jodi, she also struggles with body image. Unlike Jodi, however, her body image issues are never examined or resolved by the film. She makes comments like, “If you see me eating carbs, I need you to slap me across the face.” And Jodi does. I was holding out hope that at the end, the two sisters would both accept their bodies and reject the offensive and problematic notion that you need to watch and count calories to maintain your beauty. But no, Harper ends the movie squeezing into the perfect dress, and still promoting the eating disorder culture that’s subliminally underlined throughout this whole film.

The entire film struggles with the concept of what it means to accept yourself. While Jodi apparently learns to “accept” herself in this film, she’s only able to do that once she’s had a makeover spearheaded by her neurotic mom and image-obsessed sister. New clothes, new makeup and the classic abandonment of the ponytail transform Jodi into the hot girl that no one ever noticed she was. Sure, Jodi gains confidence and starts to see herself differently, but that only happens once she puts on makeup and is perceived by others as beautiful. What’s the message here? Accept yourself, but only once you’re presenting yourself in a way that makes you acceptable to others?

And of course, the romantic conclusion. Throughout the movie, Jodi tries to win the affection of Stig, the tall Swedish exchange student, but ends up with her short best friend. “Tall Girl” wants you to believe that you shouldn’t discount someone because of their height, but it ends up feeling more like some sort of advocacy film for sad short boys. Dunkleman’s persistence and refusal to give up on Jodi—who has repeatedly told him she isn’t interested—is rewarded, even when he does things to hurt her throughout the film. They don’t seem to have anything in common, but Jodi eventually gives in, which is a confusing and unsatisfying ending.

The major criticism most people seem to have with “Tall Girl” is that it tries to drive the idea that tall people are discriminated against. The quote, “You think your life is hard? I’m a high school junior wearing size 13 Nikes. Men’s size 13 Nikes. Beat that,” has prompted the internet to think of all the things that could “beat that”: being discriminated upon race, religion and sexuality, to name a few. Jodi’s best friend, Fareeda, is black and never seems to check Jodi’s privilege when it comes to actual discrimination. She’s also objectively more interesting than Jodi, but her story gets pushed to the side to make more room for Jodi’s 102-minute-long pity party. Why did the writers need to take this route? Why is Jodi made out to be some sort of martyr because of her height?

Here’s the thing: I think a movie like “Tall Girl” could have been okay under different conditions. While people wonder why such a niche movie ever got made (and some are outright angered by Netflix’s decision to focus on a tall white female’s struggles, which I understand), I don’t think there’s anything wrong with portraying such a specific story.

But the experience of being a tall girl is one that is nuanced, more nuanced than this movie portrays it. Tall girls have insecurities like any teenager, just specific ones. Being taller than most of the boys in your grade cuts your dating options down unless you want to be scrutinized for dating someone shorter than you. You’re convinced that your height is going to be the reason you end up alone. And you’re constantly wondering if maybe you should just take everyone’s advice and decide to play basketball or volleyball after all. I genuinely believe that Netflix could have made a coming-of-age tall girl movie that touches on these themes in a heartwarming and specific way. Height is not a curse, but it does exacerbate the already-existing insecurities that every teenager has. Maybe if “Tall Girl” had stepped into Jodi’s size 13 Nikes, they would’ve seen that the weather up here actually isn’t that different after all.