KWUR Week started out right on Monday night—with dancing. This Washington University tradition has brought free new music to students for 27 years and continues to do so this year.

The first event of this year’s KWUR Week was Anna Burch’s performance in the Gargoyle on Monday night, with campus band the Snapchettes and St. Louis group Frankie Valet opening. If you haven’t been to see the Snapchettes in concert yet, do it. Their set blended vintage-feeling music with lyrics about love in the age of Tinder, and the whole crowd danced like they were extras in an ’80s movie.

That pop feel changed into rock when Frankie Valet took the stage. Still high-energy, the dancing started to incorporate less grooving and more headbanging. The style changed yet again for Anna Burch, whose airy, atmospheric tunes left everyone vibing. The highest-energy bits of her set were, strangely, the times when she was not performing. She spoke to the audience in between nearly every song, and her genuine, earnest manner (and jokes she herself sometimes laughed through) were a pleasant addition. 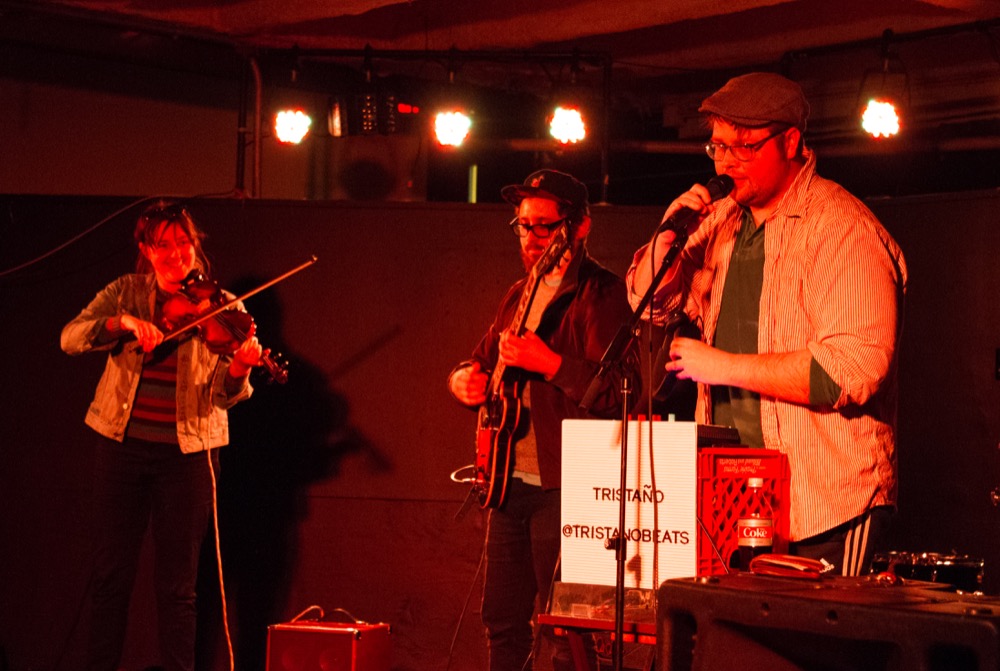 Musician Lennie Tristano performs in the Gargoyle for KWUR Week. The Local Showcase event Wednesday night was one of several performances hosted by KWUR throughout the week.

“It’s an amazing combination of late night dancing, an encouragement of alternative community engagement [within Wash. U.’s campus and beyond] and a belief that everyone has the capacity to create,” Weinstock said. “It’s an assertion that we are all artists in our own way.”

For its crowd of students and impressive roster of bands, however, this year’s event has had its share of troubles. After a mishap with the budget, KWUR Week lost SU funding. After the failed appeals process, they created a GoFundMe page, which, with help from current and former students, parents and alumni, the St. Louis DIY music community and many more, secured funds for the event.

The Snapchettes highlighted these issues during their set. Their concern over the planned removal of the Gargoyle was met with a sympathetic groan from the crowd, and everyone cheered for the generous sponsors of KWUR Week. But nothing aroused as much emotion as the event’s funding.

“Back in the day, people used to dance,” junior Andy Lewis, the Snapchettes’ guitarist, said, looking out over the crowd, a large portion of whom was merely swaying to the music. “Get out there and show the SU Treasury why they should fund us!”

Weinstock emphasized KWUR’s gratitude to the community: “There’s no way we would have been able to pull off as complete a KWUR Week as we were able to if it was not for the love and support of our incredible community.” 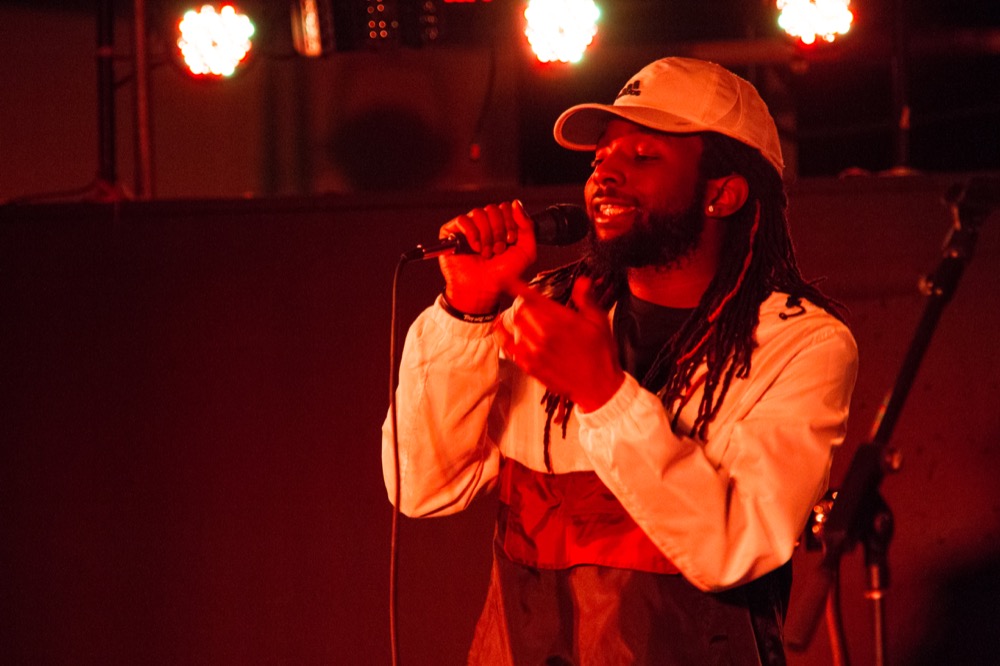 Hip-hop artist D’Andre performs at KWUR’s Local Showcase. D’Andre was one of four acts featured in the event Wednesday.

KWUR Week will continue with events on Friday, Saturday and Monday. Friday’s show is the biggest of the week, featuring local rapper Mvstermind and New York indie band Dolly Spartans. Weinstock promises Friday’s event will be “a really cool mix of hometown love and raucous guitars that everyone can boogie to.” KWUR’s Facebook page promises much the same, saying, “It’s gonna be a hoot!”

Saturday’s event is a bit different—KWUR’s biannual DJ mashup will have (in Weinstock’s words) everything from “’90s throwbacks, industrial rap and funk classics,” to “elevator music/ philosophy lecture mashups.” This mix of funky tunes from 11 different DJs is sure to have something for everyone.

The final event in KWUR Week 2019 will be calmer than the rest. If you’re in the mood for classical music, the Classical Showcase in the Goldberg Formal Lounge on Monday night is the place for you.

This variety is typical of KWUR Week. For the last 27 years, KWUR has tried to reflect the diverse musical interests of the Wash. U. campus community. With so many people on campus, it makes sense that their music taste should be so incredibly varied.

“In its current incarnation, the event exists to bring something to the student body that no one else on campus would otherwise provide,” Weinstock explained. “The goal is to create a week of fully accessible and welcoming shows that exhibit the growing taste of the student body.”

“We want to bring together a diverse set of sounds, whether that’s twee-pop, ambient noise, neo-soul or something else,” Weinstock continued. “We want someone to walk into a KWUR Week show and leave feeling like they’ve found a new favorite, all the better if it’s someone they had never heard of before they walked into the venue.”

Because of that, KWUR Week artists come from not only Wash. U. campus or the St. Louis community, but all across the country. KWUR selects the artists they think are up-and-coming, and that means looking everywhere.

While for logistical reasons many of these out of state acts come from the lineup of Austin music festival South by Southwest (it is easier for a band from, say, New York to come to Missouri if they are already in the neighborhood), ultimately, Weinstock says, “We pick the people we think are making the best music around right now, the people who we think the student body will love upon discovery, the people who inspire us and represent the wide world of music listening and creating.”

KWUR Week has provided free music and the opportunity to discover new favorite bands to Wash. U. students for over a quarter of a century, and it won’t be going away anytime soon. If you have a free couple of hours, head on over and check out a KWUR show. You won’t regret it.