The Black Rep continues the BLM discussion with ‘Canfield Drive’

“Canfield Drive” started as a response to a series of questions that arose with respect to the disparity between the national media coverage of the Michael Brown shooting and what was being described on social media. A partnership with The Black Repertory Company came shortly thereafter, and “Canfield Drive” was born.

The world premiere of “Canfield Drive” with The Black Rep casts a fresh light on the 2014 shooting of Michael (Mike) Brown and the issues of police brutality and race that America was forced to confront as a result. 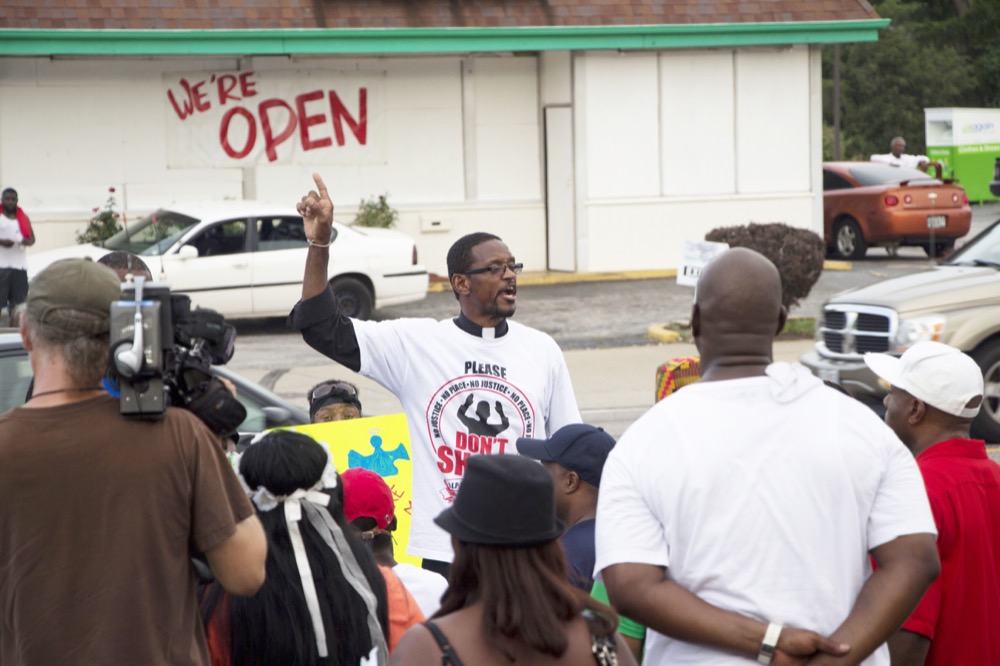 A pastor addresses the shooting of Michael Brown and the resulting protests to a crowd in Ferguson, Mo. in 2014. The crowd gathered in support of the Black Lives Matter movement and included Wash. U. students who drove to Ferguson with the Association of Black Students.

Following the Mike Brown case from the viewpoint of an African-American news reporter and her white colleague covering the story and discussing the rising race issues in America, “Canfield Drive” continues the hard conversations and brings awareness to the climate in Ferguson, Mo., and even in places across the country five years later. With a small cast of four actors, the various roles needed to enhance the narrative—clergy members, activists, movement members, political figures, police officers, etc.—are played by each cast member fluidly without regard to the gender of the person portrayed. With the addition of various props and costume pieces, the creation of these characters by the four actors truly makes it an ensemble piece.

The show begins with each member of the cast placing a memento on what symbolized the spot on Canfield Drive where Michael Brown was shot. The set was built to look in part like a memorial for Mike Brown and a newsroom where most of the play takes place. Media screens are used to heighten the experience and show clips of footage from the actual Brown case and identify the other characters to create the feeling of watching the Brown case play out on the news. As an audience member, you feel the emotions and the anger of Imani, the African-American news reporter, towards her white colleague’s uninformed and racially-biased rhetoric, the system and the people that created it.

By analyzing the differing relationships of minorities and white people with law enforcement, “Canfield Drive” is strong, moving commentary on race relations in America and serves as a reminder that Black Lives Matter. It makes you decide whether you’re going to “choose to show up to the conversation,” or decide not to take part in a discussion that needs to happen and should not stop with Mike Brown, should not only happen when there’s news coverage and should not only happen when there’s someone there to witness it. This is a problem caused and created by systemic racism in America and “Canfield Drive” is the play that addresses it beautifully. You can turn off the news, but this is a play that you simply cannot ignore.

Washington University, I ask you to make your way to Edison Theatre to see the world premiere of “Canfield Drive.” There’s one more week left, with shows Wednesday and Thursday at 7 p.m., Friday and Saturday at 8 p.m. and Sunday at 3 p.m. Student tickets are $15. The show’s run time is roughly two hours and it is an expansion of a topic we should all be more aware of. The theater that The Black Rep performs is important, and this proves it.