Indie singer-songwriter Laura Stevenson gave an energizing and vulnerable performance to 80 Washington University students at the Gargoyle Sunday night. The singer and her band made a stop on campus after touring worldwide for the past year.

Wash. U. sophomore and hip-hop artist Kendall Rob Hall, who goes by the stage name Rob Apollo, opened the show with nine songs, many of which have never been released and—as Apollo told the audience—may never be released. 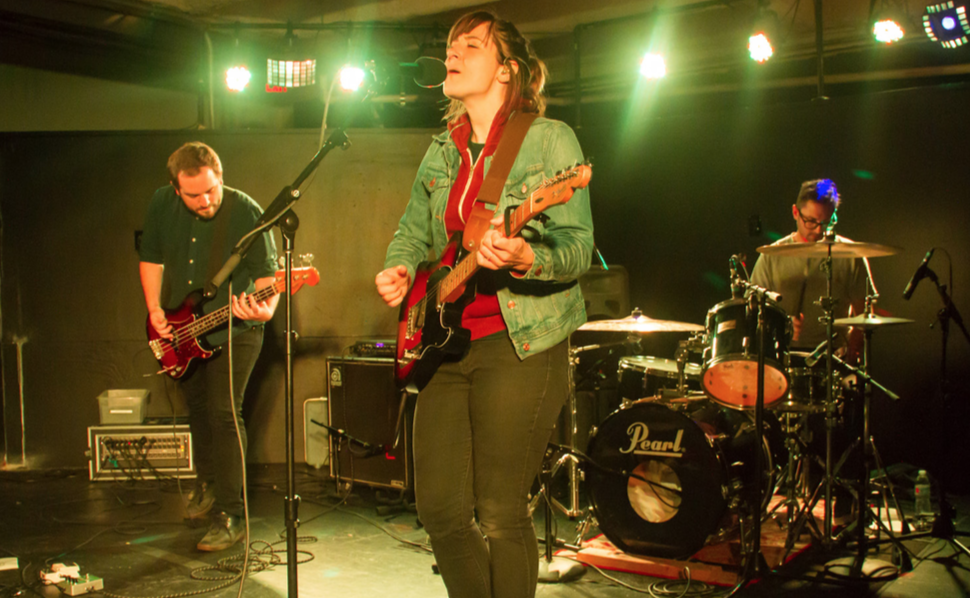 Singer-songwriter Laura Stevenson plays with her band at the Gargoyle. Stevenson and opening act Wash. U. student Rob Apollo performed Sunday evening at the KWUR-hosted show.

Apollo’s lyrics were filled with passion and honesty, discussing topics like love, God, sex and his experience as a Wash. U. student. His beats were strong enough to excite audience members into dancing, a challenging feat for any opening act.

“I’m skipping the next song ‘cause it’s kind of sad,” said Apollo two songs into his set.

In one amusing moment, Apollo told of his attempt to write 100 songs this past summer. As the pressure to reach his goal set in, he wrote his fourth song of the night in eight minutes, which was clearly a hit with audience members. Apollo did not end up reaching his goal but was still able to write an impressive 60 new songs over the summer and has an album available on SoundCloud.

Stevenson quickly got the audience moving with a performance that deserved far bigger of an audience than it got. Her voice was a perfect balance of beautiful and powerful as she sang songs from her most recent album, “Cocksure,” as well as older releases.

Stevenson’s songs sound like what life feels like at its most raw moments. Her melodies were fresh and compelling, and her poetic lyrics had the ability to instantly connect with listeners, regardless of the subject.

Stevenson also related to audience members through short, funny anecdotes, and even told an original joke.

“Which third Stooge is the most enthusiastic about landscaping?” said Stevenson. “Moe.”

Though she clearly doesn’t have a bright future as a comedian, Stevenson’s commentary provided comic relief throughout her emotional 50-minute set.

Catering to her audience, Stevenson even touched on the college experience.

“This song is about trying to graduate from school,” said Stevenson when introducing “Master of Art,” from her 2011 album “Sit Resist.”

Though the room may not have been packed, Stevenson’s music filled the space in a truly memorable and moving performance.