Producing the “sound of self esteem” doesn’t sound like an easy task, but American Poetry Club, a student band at Washington University, is more than up to the task. Founded two years ago by Jordan Weinstock, APC produces what Weinstock has labeled “cosmic American” music.

“I don’t like genres,” Weinstock said. “But my preferred description of our music is ‘cosmic American,’ in the sense that we live in America and our music will fill the cosmos.” 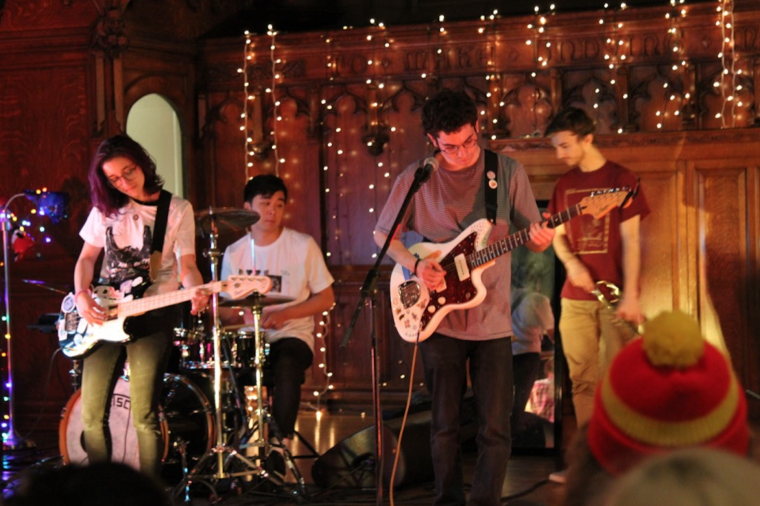 Although the term is typically used to refer to country music—which APC is not—Weinstock said he’s enchanted by the “idea of just a bunch of dumb kids walking around professing their love for each other in basements,” as it’s such a beautiful and “cosmic and universal idea that I’m trying and sometimes succeeding to hit upon.”

If one were to fit APC’s music into a more cemented genre, it would probably fall into categories like bedroom pop or emo but fitting into a box was never what the band—which Weinstock describes as being more of a club, really—has ever been about.

APC wasn’t brought to life in the way that most bands are thought to be. Weinstock started as being a member of a different band, The Chair Enthusiasts, but broke off amicably to pursue creating APC after his mother’s diagnosis and battle with cancer.

“My mom had cancer last year, and I am not good with emotions,” Weinstock said. “So writing is a very easy way for me to express how I’m feeling. Instead of talking to someone about the things that I was feeling, I would write songs about it. They were songs I wanted to do something with because I felt proud of them, and they had helped me process information that I couldn’t otherwise.”

Weinstock said that he didn’t feel as though his songs fit with The Chair Enthusiasts.

So, he decided to throw another name onto his creative process and get some friends together to start APC. APC is unique in that it’s not a band with a set member list.

“That’s why we call it a club, more than a band,” Weinstock said. “It’s really more about whoever can stop by and play with us.”

The idea behind APC is to encourage kids to come out and get involved in music, whether they’re coming from a strong music background or are self-taught like Weinstock. Often, there’s a regular participatory crowd, but the band isn’t dependent upon that.

Although one might think that this unconventional approach would make the creative process more jumbled, Weinstock is of a firm mind that it emphasizes creativity and makes it less of a concerted process. The band creates music when Weinstock writes lyrics and encourages members to do their own thing.

“I don’t like telling other people what to do,” he said of the music making process. “So I kind of just let everyone play what they feel best playing.”

Weinstock said it’s a very different dynamic than previous bands he’s participated in, but he prefers the vibe of everyone having their own creative license.

“Everyone feels more confident,” he said. “Every time we play a song, we play it differently…Everyone has different perspectives about how a song should sound, and that makes it unique. I think it makes it more fun for our audience. We play to the same seven people all the time, and I’m sure they don’t want to hear the same nonsense played over and over again all the time.”

“I hate hearing my songs twice. I’d much rather be surprised every time,” he said with a smile.

Since releasing their new album, “we are beautiful, even when we are broken!”, which took the band nearly three months to produce its eight songs, APC hopes to broaden their horizons.

“This album was very different because the whole band worked on it. The other APC stuff has been a lot of me, recording in my bedroom on my [iPhone],” Weinstock laughed. “This was the first album we created as a band.”

In the wake of their album, APC is hoping to branch out beyond their usual venues of KWUR events and Foam, a venue on Cherokee Street.

“We’ll play wherever we’re wanted,” Weinstock said. “But we’re hoping to get out on tour, go around St. Louis, and maybe hit up the Midwest.”

Listeners can catch APC’s music, which is always being unexpectedly and sporadically released as the innovative spirit strikes, on Bandcamp, Spotify and Apple Music. The band also keeps their Facebook well-updated with new releases and events.