Rap music is the sound of a people, and the sound of a generation. Rap is the voice of hip-hop. Rising as the sound of New York in the 60s, black and brown youth used this art form as a means to respond to the world around them, be it racism, destitution and urban brutality among other issues. This music style spread from New York as artists across the country began to toy with the genre and create their own unique sounds, even going on to expand their careers into acting and business. Rap, without a doubt, has a different sound than it did at its onset—one that is often much faster in tempo and much more focused on the aspect of fame and fortune rather than the rise to it, or the personal struggle to get to a point of personal success undefined by a record label or number of albums sold. In another sense, rap has not changed. Rap is still a means to spread a message to the people who listen to it. It is the modern smoke-signal, the new fireside tale. Rap is the new oral tradition.

On August 3, 2018, the artist Travis Scott (Jacques Bermon Webster II, you may know him as baby daddy to Kylie Jenner and, therefore, father of Stormi) released a new album. At 26, this is his third studio album with GOOD Music, Grand Hustle Records, Epic Records and Cactus Jack Records. Now, if you’re a fan of Travis Scott’s previous work, then you were as pressed with anticipation as I was for this new release. Previous tracks like “Antidote,” “Goosebumps,” and “Champions,” on which he was featured, have performed well in the past and been dubbed as “bangers.” Based on his work’s previous performance in the charts, with his first album debuting at number three on the US Billboard 200 and his second debuting at number one on the US Billboard 200, “Astroworld” was expected to perform well, and it has. 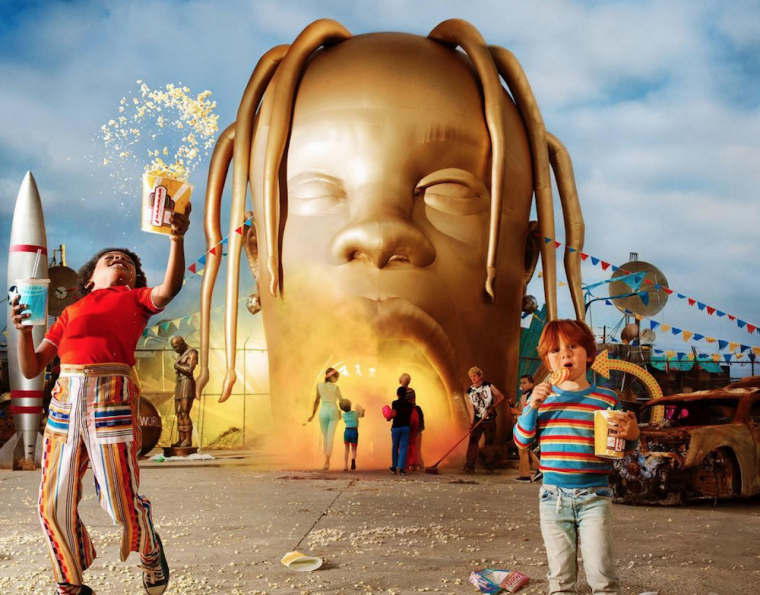 Travis Scott’s “Astroworld” has been at the top of the Billboard 200, ranking number one for the two weeks it has been on the charts. “Sicko Mode” ranks as the most popular song on the album according to Spotify, with over 70,000,000 plays. This seventeen-track album features songs one can only be described as “hype tracks,” but they are hype tracks with a purpose. In an interview with Rolling Stone, Scott describes “the real dark day” when his second studio album “Birds in the Trap Sing McKnight” was snubbed for a 2016 Grammy nomination. The result was that he and his team “wanted to make an album that was undeniable,” and that’s what he and his team have done. In an interview with GQ, Scott reveals the meaning behind his new album’s title, named after an amusement park in his hometown of Houston that was “tor[n] down to build more apartment space.” This amusement park was AstroWorld.

The album features the instrumental and vocal talents of well-known artists across genres such as 21 Savage, Stevie Wonder and John Mayer, just to name a few. Up-and-comers are not forgotten and are given a chance to shine on this album, with Don Toliver, a SoundCloud rapper from Houston, rapping a verse on “Astroworld’s” 13th track “Can’t Say,” which had social media buzzing.

This album is the brainchild of a man with something to prove—a man who cares for his city. Not only has he proven that he has the talent, but he has given the people a message to hold on to. He has given us, as listeners, a peek into what his world is like—a world where your community snubs you, a world without your childhood joy. Through the lyrics in songs like “Carousel” and “Sicko Mode,” we experience the vexation and dejection synonymous with unmet expectations and glee demolished. This album, this new “Astroworld,” puts us back where rap started. It is not just the bass-pumping party music you might believe it to be at first listen. It is the sound of something being taken away and given new life; it is the sound of oral tradition come alive.