“If you are easily offended, please stay. It’ll make this a lot more interesting,” event emcee Maxi Glamour said. That’s when I knew it would be a great show.

Maxi Glamour, a non-binary drag star, was one of four local drag performers—along with drag king Rydyr Reeves, Chastity Valentino and Akasha Royale—to show up and show out at Thursday’s 12th annual Pride Alliance-sponsored drag show. Maxi Glamour preached sex and gender positivity and representation throughout the show, taking time to talk about non-binary identities and praising fellow performers for being sexy and working hard on the stage.

The drag show was preceded by a Wash U Pride Alliance general body meeting last Tuesday that featured Maxi Glamour and Rydyr Reeves, who spoke about dragtivism—using drag as a platform for social change—followed by a headdress-making workshop.

Education about drag culture and LGBTQIA* identities was interwoven through the show as well as in a celebratory manner. It was a night of entertainment, pride and celebration as well as a time for education and understanding the roles of different identities in drag, with an emphasis placed on making the show an inclusive space for all gender identities and expressions.

At the show itself, student performers and professionals shined alike with dazzling routines. The atmosphere was incredible. Performers playfully engaged with the audience members during their perfectly choreographed and executed routines. 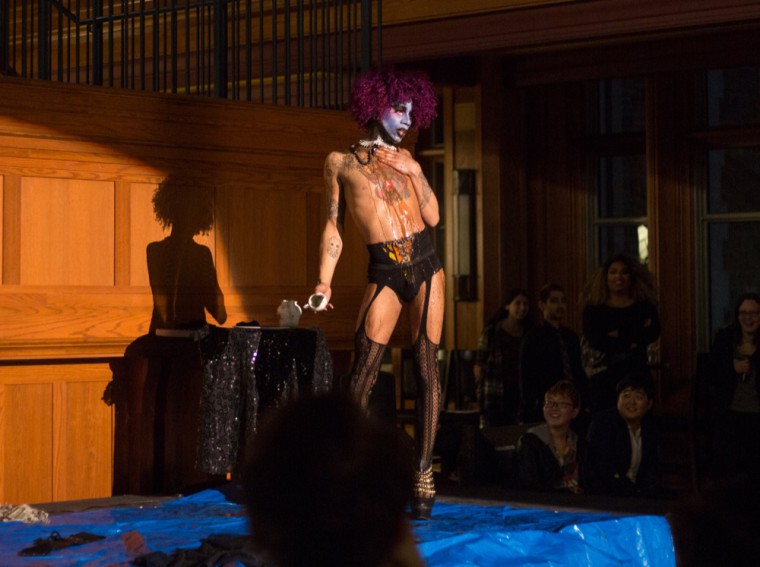 Non-binary drag star Maxi Glamour performs in the drag show hosted by Wash U Pride Alliance in the DUC Thursday.

Each local drag star graced the audience with two performances, which featured lip-syncing, burlesque and thematic choreography. Drag kings, queens and non-binary stars put in serious work on the stage with intense, demanding choreography (look up a “death drop” if you don’t know what that is). Drag is truly an art that demands high energy, talent and a lot of personality.

A big highlight of the show was seeing student performers try drag, many making their stage debuts. Six students took the stage and wowed the crowd with fun, themed routines. Their performances were met with great, positive energy from the crowd (plus the occasional dollar bill).

If you weren’t there, make sure to check out the Wash U Pride Alliance Facebook page for more photos and videos from the show.

Editor’s note: This article has been updated so as not to contain the name of one of the groups of performers.