It was a dark and spooky night…Murder under the bigtop

In the hierarchy of things that terrify me, clowns and creepy carnies fall somewhere near the top, so All Student Theatre’s (AST) carnival-themed murder mystery event was the perfect way to get in the spooky Halloween spirit. From a corrupt cash embezzlement scheme to a (spoiler alert!) murderous clown, the action-filled night was a blast for the participating students.

The interactive annual event, which assigns participants roles in a murder mystery performance, began as students dressed in their best renditions of acrobats, lion tamers, ringmasters and more filed into the Orchid Room of the Danforth University Center, already in character and ready to put their best sleuthing skills to the test. This was the time for participants to ease into character and start figuring out their place in the plot, which for me meant trying on a terribly embarrassing old-timey accent. 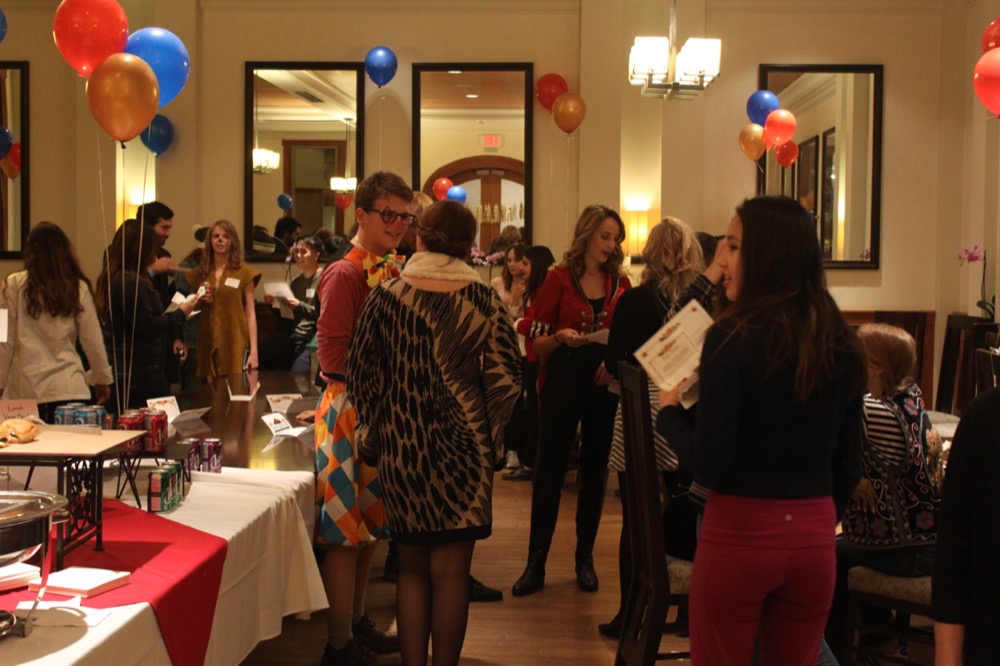 Students interact as part of All Student Theatre’s murder mystery dinner, themed Murder Under the Bigtop, this weekend. The dinner is an annual event, with an ever-evolving theme.

In addition to the main action, AST prepared a great night with a photo booth, face painting and carnival-themed food. I can’t rave enough about the food: mac and cheese fritters, fried Oreos, funnel cakes and Swedish Fish punch were some of the notable hits among the attendees.

The night hit its stride when the action began to unfold with the center of the mystery: the murder. It was highly dramatized with an announcement from an investigator, followed by all the participants being ushered to the next room on the second floor of the DUC, where evidence was distributed, and deals and accusations were made out in the open.

We were next taken to the third floor of the DUC, where we had our final chance to examine the evidence and submit our guesses for who was the murderer among us.

As we were told “whodunnit,” AST announced their spring production: Noises Off.

The murder mystery event is a way for AST to raise money and generate a following for their spring production while also getting more students involved in a theatrical experience.

“It’s so fun to see these people who don’t get involved in theatre a lot to come in and accuse each other of murder,” AST event chair and senior Kate Biddle said.

The event is a great way to introduce students to the theatre community while also getting a night full of Halloween-spirited fun.

Tags: All Student Theater, Murder Under the Big Top