From augmented-reality art installations to in-bathroom advertising agencies, there was a little bit of everything at this past weekend’s inaugural Murmuration Festival. Murmuration Fest describes itself as “the convergence of art, music, science and tech” and the various festivities of the three-day event, held at Cortex Innovation Community in the Central West End, certainly manifested this convergence—and the diversity of the St. Louis creative scene. Local innovators of every kind participated: Monsanto sponsored the free-to-all first day of the festival, [email protected], while independent artisans displayed their work at the Maker Expo throughout the weekend.

Creators at the festival had plenty of links to Washington University. Nick Curry, a 2015 graduate of Wash. U., helmed a pop-up market for Westminster Press, his art gallery/consignment shop, which displays and sells pieces by locals. During Friday’s event, one artist sewed custom patches of attendees’ faces, while Curry was kept busy selling everything from zines and posters to jewelry and textiles. Business was booming, and Curry was pleased, calling Murmuration Fest a “fabulous event so far.” 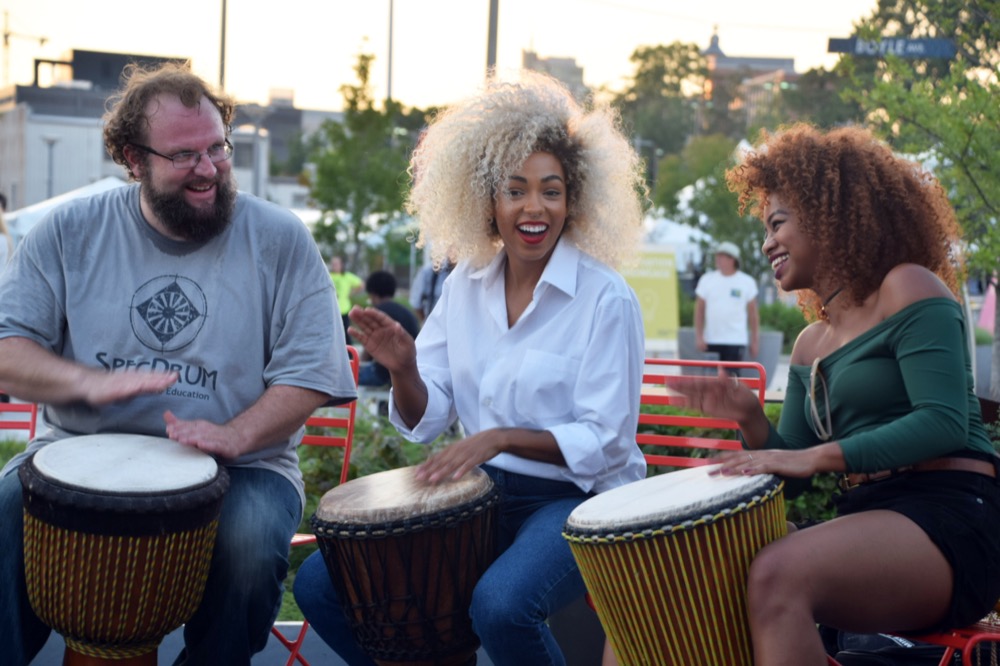 Musicians perform at the Murmuration Festival hosted at the Cortex Innovation Community last weekend. The three-day festival brought together musicians, artists and innovators in St. Louis.

Outside, striking art installations invited guests to consider them from every angle and, in some cases, interact with them. Artist Vita Eruhimovitz, who received her Master of Fine Arts from Wash. U. in 2015, collaborated with Michael Rees to add an augmented-reality element to her piece “The Evidence of Mountain Root.” Somewhat resembling a giant molar, Eruhimovitz’s piece was inspired by her learning that mountains have geological “roots”: sub-crustal extensions that float on the denser mantle layer of the Earth. The sculpture consists of a 3-D topographic model of a real-life mountain valley atop Eruhimovitz’s artistic interpretation of the mountain root.

To communicate the “uprooting” of Earth by human activity, panels depicting our modifications of mountains, from mountaintop removal mining to the in-progress construction of the Crazy Horse Memorial, are scattered around the piece. Each panel is also a portal to an augmented reality component of the piece, created by Rees. Viewers scan the images with an app called Augment to reveal distorted images of a man’s screaming face fused with a smartphone.

Rees also participated in a talk for the [email protected] series which, along with the musical performances, were the only components of the festival that required paid tickets. These talks, spanning such diverse subjects as “Multi-disciplinary performance in a multi-media world” and “How digital is changing the world for the rest of us,” seemed to have sparser attendance than the festival organizers were hoping for, judging by the number of empty seats. However, the audiences were engaged, and the topics were fascinating, if sometimes a bit abstract for this writer.

Like the [email protected] talks, most elements of the festival couldn’t be categorized as simply art, music, science or tech—but all reflected the theme of convergence. At one booth in the Maker Expo, festivalgoers were invited to paint on sheets of foil with circuited paintbrushes that made sounds when touched to the metal surface, producing a work of art with both visual and auditory value. Meanwhile inside the @4240 building, Bill Smith’s delicate, complex constructions were suspended from the ceiling. These structures, based on the geometry of cyclic carbon allotropes, look like the fever dreams of a stressed Organic Chemistry student. Smith produces scalable models for his proposed new building system of nanocomposites. The artist has a background in mechanics and microbiology, and his pieces are primarily for utility, not beauty, but their aesthetic elegance is undeniable.

At the Innovation Showcase, local businesses and organizations displayed their, well, innovation. Sitting Duck Advertising attracted attention, as ad companies are wont to do, with an exhibition of its public restroom-based advertising solution: a “media frame combined with a shelf element.” (Think: TV screen above a urinal.) Next door was the booth for GiftAMeal, a start-up founded by Wash. U. undergraduates. GiftAMeal is an app with a self-explanatory name: It donates a meal to a person in need each time a user takes a photo inside one of its partner restaurants. The company’s presence at Murmuration Fest seems representative of a growing—converging, even—relationship between technology and Wash. U. entrepreneurship.

One group that seemed to embody the spirit of Murmuration Fest was Arch Reactor. Founded in 2009, Arch Reactor is a “hackerspace,” dedicated to “hacking” (modifying) existing objects and creating them, too. The organization has a physical workshop where members collaborate on projects from high-altitude weather ballooning to increasing the capacity of card-weaving looms, as well as conducting educational and outreach workshops. Member Diane Sudduth summed up Arch Reactor as “We do everything…We make lots of mistakes and we solve lots of problems.”

At Murmuration Fest, inventive solutions are equally as exciting as challenging problems. The Central West End lit up last weekend with a convergence of new ideas and connections, music and art in concert with science and technology. It would be excellent to see this fledgling festival return even stronger next year. In the meantime, we can only hope that Wash. U. and its students continue to explore and invite their neighboring communities, converging into cohesion as St. Louis steps into the future.