‘So much subtext and quintessentially British’: A Q&A with the cast of ‘Betrayal’ 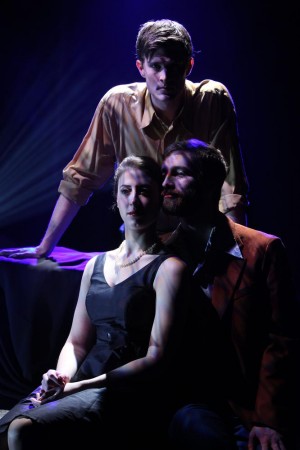 The Performing Arts Department (PAD) production of the classic Harold Pinter drama “Betrayal” opens Thursday, March 27. Student Life recently sat down with the cast, featuring Sarah Palay as Emma Downs, Charles Morris as Robert Downs and Connor McEvoy as Jerry, for a short discussion on what we can expect from their production.

Student Life: So this is each of your last PAD shows. How are your emotions going into opening night?

Sarah Palay: I’ve been thinking about that a lot this week. I don’t think it’ll hit me until we strike the show that this is my last show here. The PAD shows have kind of defined my time at Wash. U. and it’s hard because will I ever act again beyond this? I’m not really sure. It’s bittersweet. It’s a great show to end on, but it’s sad. Definitely sad.

Charles Morris: I didn’t start doing PAD shows until I was a junior, so this is only the third one I’ve ever been in. I guess it doesn’t even really feel like an ending, and I’m still getting accustomed to how they go. It’s super positive.

SL: How has working with such a small cast been, as opposed to a larger ensemble?

SP: It’s been really fun. They’re great to work with, and it’s the first very small cast I’ve worked with. Another play I was in, “Anatol,” was small because [each actor] only interacted individually with [the character of] Anatol. It’s nice because we’re all pretty much in the whole show and it’s cool to have a show where you get to really experience every part of it. There’s something to be said about having a huge cast in a musical and that’s fun and exciting and very collaborative, but [“Betrayal”] is very intimate.

Charles Morris: It’s almost even smaller than three people cause most of the scenes are just two of us. We were all in Acting III together, so it almost feels like a natural progression of that.

Connor McEvoy: Well it let us hit the ground running ‘cause we all knew each other and there were so few of us. It let us go in really quickly and get up off our feet almost immediately cause we have all acted together previously, whether in productions or in classes, and so there was no real learning curve between us.

SL: So Sarah, you recently directed a thesis project that Charles acted in. How was collaborating with him as an actor versus as a director giving direction to an actor?

[Sarah and Charles both laugh]

SP: I’ll speak to the thesis end of it. It’s a very odd experience to direct your peers. It’s just strange because…I loved doing it, and having actors that were super responsive to my suggestions and thoughts and having them create my vision. But it’s extremely hard to have that hierarchy when that hierarchy shouldn’t exist, so that was a totally different relationship than just acting together. I liked acting [with Charles] better than directing him. He’s a very talented actor and it was a pleasure to direct him, but it’s more fun to act with your peers.

SL: Charles, do you have anything to add?

Charles Morris: Not really. Sarah was super qualified for what she was doing and did a great job and I had a great time.

SL: How does being in a Pinter play compare with your past PAD experiences?

SP: It’s so hard. It’s a very different beast. We worked on Pinter in Acting III, so we sort of had an introduction to Pinter. But it’s so conversational and reading it on the page is so different from acting it with each other. There’s so much subtext and it’s quintessentially British. Which is difficult ‘cause we’re not British.

Connor McEvoy: [in a British accent] What are you talking about?

Connor McEvoy: I’ve just been watching reruns of Mr. Bean to make sure I’m up on my English accent.

Charles Morris: That definitely explains it.

Connor McEvoy: [joking] The only words I can say are Mr. and Bean.

Charles Morris: Along with what Sarah said, it’s kind of deceptive. If you just read the scene straight out it seems like nothing crazy happens, but then once you’ve done all the work on it, weeks and weeks of work on it, we know that just under the surface these characters are falling apart.

Connor McEvoy: It’s much more pent up than my last collaboration with our director [Annamaria Pileggi], “Curse of the Starving Class,” a Sam Shepherd play. There’s a lot less outright emotion and less obvious emotion. They seem a little bit more awkward, and rooms you just don’t want to go into. You can cut the tension with a knife.

SL: Going along with what Connor said earlier, how have the accents been going? Have they been more difficult or less difficult than other accents you’ve had to do for the PAD?

Charles Morris: First of all, I’m the worst at the accents out of us three.

Charles Morris: And I even did a British accent in “The Night Season,” and redoing it now is making me realize how bad I was at it then, but we’ve all gotten a lot better. Jeffery [Matthews] has come and helped us. [Pileggi] has helped us.

SP: It’s difficult for me because there are certain sounds we don’t make. But I’ve found in the accent work that I’ve done that it helps to just embrace it totally, cause I’ve had a temptation to be like, I sound so stupid doing a British accent and draw back from it, but as our director would say, just lean into it. And just embrace it because it fuels the text and the intention.

Connor McEvoy: It’s an accent that one starts out more familiar with, like I’m more familiar with a British accent than I am with an Italian accent, but it’s a matter of the very small pieces. Sometimes on television you see Brits try to talk with an “American” accent, there are very small things that they don’t get right that you wouldn’t hear unless you grew up speaking in that accent. The trick is just figuring out those small things that our ears aren’t trained to hear. Which is why I watched a lot of Monty Python and Mr. Bean to prepare.

SL: Did anyone else watch movies to help train your accent?

Connor McEvoy: That has Mr. Bean!

SL: Yeah it does, he’s the guy in the store who—

SP: Oh, he’s the guy who wraps the present.

SL: Last question. If you could switch roles with one other cast member, who would it be?

[Joe Holley plays a small role as a waiter.]

Charles Morris: No, I’d probably want to be Joe too.

SP: I’m really content with Emma. But I think both male roles would be really fun. Robert would be fun because he’s a passive-aggressive a–hole.

Charles Morris: Yeah, Robert is a bit of a loose cannon. [Pileggi] is always telling me, just imagine what it would be like to throttle her right now and it’s like, oh, OK, now I have these thoughts bouncing around in my head.

SP: He gets to be angry, which is always fun.

Charles Morris: But [Emma and Jerry] get to hook up.

Connor McEvoy: So do [Emma and Robert]. It’s the first kiss in the play!

Charles Morris: It’s got nothing on what you do.

SP: Jerry would be fun because he’s delightful.

Connor McEvoy: And you get to have a beard.