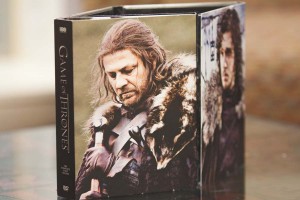 The critically acclaimed HBO series “Game of Thrones” was released on DVD for the first time on March 6.

Critically acclaimed HBO series “Game of Thrones” debuted last year and wrapped up its first season in June of 2011. On March 6, 2012, eight months after the finale, HBO released the entire first season on DVD. The upcoming season is starting on April 1st , so you have just enough time to catch up before the season two premiere.

The series is based upon the fantasy novel series “A Song of Ice and Fire” by George R. R. Martin. The story is centered on the Stark family, a northern noble family that is soon forced to deal with the political machinations of competing parties, all of whom are hoping to capture the Iron Throne. Even though the series is undoubtedly a fantasy series, it is a story equally devoted to political intrigue. The filming of the series is gorgeous, with attention paid to both broad landscape and intricate details.

The special features in the DVD set are mostly located on disc 5, although there are some features on disc 1 as well. This makes accessing all the special features (and there are quite a few special features) fairly easy. Every disc has a copy of the complete guide to Westeros, the continent on which the majority of “Game of Thrones” takes place. The Westeros guide is a great feature to any new (geeky) fan of the series who might not have read the books but wants to know more about the world.

Disc 1 has character profiles, which are short clips of the show interspersed with interviews with the actor or actress portraying the character.

Discs 2 to 4 have little in the way of extra features, though they have some extra commentaries that seem to be standard on DVD sets these days.

Disc 5 has the majority of the special features, including a behind-the-scenes look at how “Games of Thrones” was made and adapted from book to screen. It also includes fascinating interviews about the creation of the Dothraki (a race of peoples featured within the series) language, world development and further mythology of the show.