‘Doctor Who’ makes a timely return 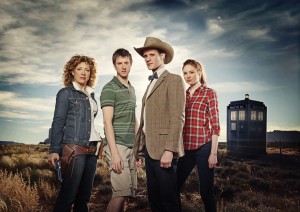 Grab your sonic screwdriver and prepare for an hour of some of television’s best laughs and thrills.

“Doctor Who,” the popular BBC science fiction series, returns for its sixth season this Sunday on BBC America at 2:00 a.m. (Saturday night for those still awake). The show follows the adventures of an alien traveler who calls himself “the Doctor.” Recognized by Guinness World Records in 2010 as the “most successful science fiction series in the world,” every fan of the genre should eagerly anticipate the new season.

Despite traveling throughout all of time and the universe, the plot of any given “Doctor Who” episode is relatively easy to understand. As a Time Lord, the Doctor freely journeys through the universe and history thanks to his TARDIS, a time machine disguised as a blue police box. He usually travels with a companion from his favorite planet, Earth. Their adventures normally concern an alien menace or threats against the entire universe.

The Doctor’s most notorious and feared enemies are the Daleks, a powerful and wholly evil species bent on exterminating all other life. With superior intelligence, help from his friends and his sonic screwdriver, the doctor always saves the day.

While in some episodes the Doctor accompanies his companion to the far future, some of the best episodes occur during Earth’s history. For example, last season the Doctor visited Vincent van Gogh in the throes of the artist’s depression. After assisting the Doctor in defeating an alien menace, van Gogh was allowed a glimpse into 2010, when the world admires his work. In another case, the Doctor visited Shakespeare and discovered the fate of the lost play “Love Labour’s Won.”

The show owes its longevity to the Doctor’s ability to regenerate. After a fatal injury, the Doctor can cheat death with a complete change in physical appearance. In addition, each manifestation, or regeneration, has its own distinct personality. Their dispositions have ranged from manic to somber, from relatable to completely alien.

To date, eleven actors have portrayed the Doctor. Matt Smith, the current Doctor, inherited the role from David Tennant, best known in America as Barty Crouch, Jr. in “Harry Potter and the Goblet of Fire.” The program has attracted some of Britain’s premier talent. Douglas Adams, the author of “A Hitchhiker’s Guide to the Galaxy,” penned many scripts in the 1970s. Noted actors to accept roles in the series include Derek Jacobi, Carey Mulligan and John Cleese.

In Britain, “Doctor Who” is a cultural landmark; everyone in the U.K. knows the Doctor. Hiding behind the sofa from fear of the Daleks is practically a cultural requirement for growing up. More importantly, though, the appeal of “Doctor Who” is its positive message. As television host Craig Ferguson notes, the series is “…about the triumph of intellect and romance over brute force and cynicism.” The new season promises to be as exciting and engaging as the last. An adventure in the TARDIS is well worth your time.