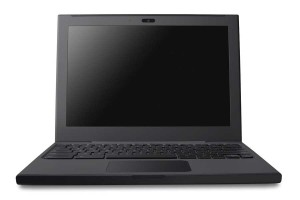 The Chrome OS Notebook resembles a traditional MacBook in appearance.

Like thousands of other people, I applied for the Chrome OS Pilot Program back in December, and then I waited. The days turned into weeks, the weeks turned into (a couple of) months. I poured over the online forums, jealousy rising within me whenever I read a thread entitled, “Just got my notebook! Thanks Google!!!”

Well, I owed Google no thanks. It was February, and there was no notebook for me. Out of the blue, without warning or e-mail, a giant package appeared at my doorstep. I was so excited that I nearly stabbed my forearm with my own scissors while I was tearing open the packaging. There it was. The unmistakable schematic for the hamster-powered rocket. And underneath the lid: my very own Chrome OS Notebook, which for expdiency’s sake (and to up my nerd-cred), will henceforth be referred to by the name Google gave it, the Cr-48.

A netbook with no desktop. A computer that only has a browser. Google’s vision of the future of cloud computing. In my lap. Asking for my login information.

The Cr-48 is a part of Google’s Chrome OS Pilot Program, so there aren’t any stars to give out here. This isn’t a normal review. It’s an overview of what might come to retail in the coming months. And if you’re lucky enough to receive a Cr-48, this is what you should expect.

The Cr-48 is a light, sexy device. With its crisp corners and minimalistic stylings, it’s reminiscent of a black MacBook. The build is plasticky, but solid. As for the screen, it doesn’t get as crisp or bright as, say, my MacBook Pro’s, but the matte finish is greatly appreciated, especially in situations that require outdoor computing.

I can’t praise the chiclet keyboard enough. Keys are comfortably spaced, solidly built and, honestly, it just feels great to bang away at them. Google has given the layout a bit of a facelift. As the Cr-48 only runs a browser (although you can get to a full terminal if you’re tech-savvy), there are dedicated back, forward, refresh and full screen buttons. Google has also replaced the caps lock key with a search key (represented by a neat magnifying glass image), much to the chagrin of YouTube commenters everywhere. A quick tap of the search key opens a new tab, and even though the same action could be accomplished by hitting control-T, this is way more convenient. I even find myself reaching for the search key when I’m on other computers.

Unfortunately, the trackpad feels cheap and performs poorly. It mimics the Apple “no-button” approach, but in practice, you’ll have a difficult time lining up your shots. As a rule, if I have to describe clicking as, “lining up your shots,” that means something’s gone wrong. The mouse almost always jumps a little when you click, and scrolling with two fingers can be a choppy experience. The same can be said for right-clicking, which is done by clicking with two fingers at once. It registers about 80 percent of the time.

On its sides, we have a charging port (to go with eight hours of battery life!), a VGA out and USB port, which works for USB mice, but I haven’t been able to get the Cr-48 to recognize a flash drive (again, those who are more tech-savvy might have some luck mounting it via the command line). Strangely enough, the Cr-48 doesn’t have an ethernet port, even though it is basically useless when it’s not connected to the Internet. There is also a front-facing webcam, but the video quality leaves much to be desired.

Of course, the machine is simple for a reason. It’s just the Chrome operating system’s (sexy) pedestal. You can think of Chrome OS as a souped-up version of Google Chrome, so naturally, Chrome OS looks a lot like Google Chrome at first glance.

The Google Chrome operating system boots up in seconds and offers increased functionality to the Chrome web browser.

Chrome OS boots up in mere seconds. In these precious seconds, Chrome OS scans critical parts of the OS to make sure they have not been modified. Chrome OS has a few more unique features, the most useful of which are panels, which can be best described as drawers that hang around the bottom of the screen. They can be “put away” and “pulled out” at will, and Chrome OS holds on to them no matter where you go. For example, you can carry out Google Talk conversations even when you’re not in Gmail. And if you download the Panelize extension, you can morph any page into a panel. Super useful, and much easier to manage than multiple windows in a normal operating system.

Another, less positive difference between Chrome OS and Google Chrome is that Chrome OS is slower. It’s all pretty ironic, given Google Chrome’s devotion to being the fastest browser. The blame likely lies on the low-end processor, not Chrome OS itself, but websites take longer to load, no doubt about it. It’s not a big deal for most websites, but Flash content, such as some games and videos (I’m looking at you, Hulu) can showcase some embarrassingly slow frame rates. Hopefully these hangups will decrease in frequency as more websites transition from Flash to HTML5.

That being said, it’s worth noting that Chrome OS is updated frequently. My system has actually gone through two updates in the one week I’ve had the device. So things are always being optimized.

Can I live without a desktop?

In a word, yes. Every Chrome OS device will ship without a desktop. Or a known operating system for that matter. The browser is your operating system, and Google provides many services to make it feel like home.

First, there is the Chrome Web Store, where users can install web apps, which are placed like iPhone icons on your start page. You’ll find some web apps that are just pretty bookmarks, but that doesn’t cheapen where they’ll take you.

I was surprised by how easy it was for me to leave behind my MacBook Pro and shift my life to web apps. For example, Google Docs is a perfectly capable replacement for most everything you’d want to do in Microsoft Office. Plus it’s easier to collaborate in Google Docs, and it’s more convenient, as you can save directly to the cloud. I thought I’d miss my iTunes library, but Pandora and Grooveshark have filled in admirably. Plus, Grooveshark has helped me realize that I actually don’t have to spend an embarrassing amount of money on “Glee” singles every week; they’re all available for free on Grooveshark. There are also web-based eBook readers, photo and movie editing programs, calendars, chat programs—the list goes on and on.

If you’re still wary, just think about this way: How often do you use your computer without using the Internet? At least for me, the answer is probably close to never. There was about a week earlier this semester when my apartment’s Internet was out, and I didn’t even touch my computer. I just used my phone. Because it had the Internet.

Google seems to be on to something with the Chrome OS. Most everything we do is on the Internet, so why not cut what amounts to dead weight? No, I couldn’t use my Cr-48 as my primary device today, mostly because I have about four years of documents and seven years of music on my MacBook Pro’s hard drive, and the Cr-48 might as well not have any storage space.

But imagine what would happen if I spill water on my MacBook. Disaster. But if I were to bludgeon my Cr-48 with a sledgehammer, my Google Docs would still be there, stored safely in the cloud. And if all of my data were somehow stored on the Internet somewhere, I would love to turn my Cr-48 into my main machine. It’s just the world isn’t quite ready for that to happen. We’re still tied to iTunes, Microsoft Office and Adobe Photoshop. The Cr-48 was built for the future. I guess that’s why it’s only a part of Google’s Pilot Program.

David Seigle and Matt Mitgang contributed to this story.