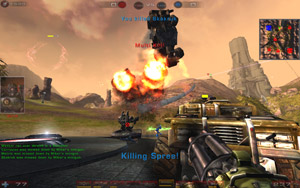 Before Marcus Fenix, there was “MIIIISTER CROOOOOW”—so bellowed the absurdly deep voice of the “Unreal Tournament 2004” (“UT2K4”) announcer when you clicked on the character’s portrait. For some reason, he was the only character that came with a bellowing announcement. A nightmarish knockoff of Baron Samedi, Mr. Crow was one of the dozens of silly-looking characters you could hop around as in “UT2K4.” He was stupid. So stupid that I got stupider just by playing as him. OK, so I didn’t play as him, but his stupidity was a hallmark of the game regardless. I’d go so far as to say all of the “UT2K4” characters were stupid, but it was a stupidity that I could buy into. For better or for worse, it’s that stupidity that’s now been lost since Epic moved on to the more serious (read: more desaturated) “Gears of War” series.

But “UT2K4” was about more than pure stupidity. Actually, it was just about pure more. Epic filled its latest and greatest shooter with more stuff than any other game I can remember. Besides including every single piece of content from “UT2K3,” “UT2K4” brought with it a stupid amount of new crap: new weapons, new maps, a completely new gametype featuring vehicles—a series first—and the revival of an attack-defend gametype from the venerable “UT99.” Factoring in the completely free Bonus Packs released half a year after the game’s release, “UT2K4” includes 121 maps, 11 gametypes, 19 weapons and nine vehicles. It was unheard of then, and it’s arguably even crazier in today’s day and age of paying $15 for five maps.

It’s not as though “UT2K4” was a case of quantity over quality. After learning a number of lessons from the less than stellar predecessor, “UT2K4” was released to critical acclaim as the culmination of the series’ seizure-inducing, deathmatch gameplay. The dodging system from “UT2K3” came into its own, and movement became even more integral to success against over-caffeinated PC gamers.

Whereas the Quake series allowed players to strafe-jump and bunny-hop, “UT2K4” focused on dodging around like a madman. Better players combined dodge-jumping, wall-dodging and other techniques to bounce around arenas like pinballs, almost never touching solid ground. The movement, like the rest of the game, was smooth, natural and so fast that it made my mind bleed. Ironically enough, it was Epic itself that later flooded the industry with waist-high walls.

But back to “UT2K4.” Splendidly slick and needlessly violent, it offered everything that a fan of the series could ever ask for: satisfying weapons, varied environments and immature innuendos in death messages. I can’t stress how gloriously stupid it is. It’s a game that involves leaping across a low-gravity space station drenched in purple lighting while unloading a tight spiral of three rockets toward a dude dressed in S&M gear. Epic was clearly not aiming for subtlety when it made “UT2K4.”

Though its breakneck pace was not exactly friendly to newcomers, the game’s colorful environments and laughably inconsistent art design did all they could to make sure even the worst of players felt welcome. Those who saw beyond the silliness, however, found a frantic, well-balanced shooter that rewarded pure skill.

Yes, born in a time before ranks, before persistence, before the entire genre turned into carrot-on-a-stick simulators, “UT2K4” was unabashedly hardcore. The emphasis on mobility made it almost impossible to pinpoint, much less kill, a better player, leading to rounds in which one player dominates everybody else because he’s simply better. Combined with a deeply entrenched community that had been playing the series for years, “UT2K4” could often be immensely frustrating. But players who persevered and improved their skills experienced the satisfaction of being untouchable gods in multiplayer. There is no feeling more satisfying than taking on two players at once and emerging victorious with a single death. “UT2K4” delicately balanced itself on the razor’s edge between hopelessly brutal and incredibly empowering, a pairing of qualities seen less and less in the age of persistence.

Even for those who quickly lost interest in capturing flags and bombing nodes, “UT2K4” was a game that kept on giving, thanks to the series’ legendary modding community. Epic released the full-fledged Unreal Editor along with each copy of the game and opened the floodgates to some of the finest user-created content to trickle down to talentless and uncreative players everywhere.

“Alien Swarm” turned the game into a co-op top-down shooter, and “Air Buccaneers” lets players duke it out in hot air balloons, complete with equally hot boarding action. A few mods, such as “Red Orchestra” and “Killing Floor,” were eventually converted into commercial games. Even now, there are still a number of mods being made for “UT2K4,” though even I can’t tell you why—but power to those modders anyway.

The series has since fallen on hard times. Epic released “Unreal Tournament 3” (UT3) in late 2007, but it was met with mixed reception from the long-time Unreal community. Besides being mired with interface issues, “UT3” took itself seriously. Flags were explained by “Field Lattice Generators,” which is just about the stupidest thing I’ve heard—and not good stupid, like “UT2K4.” In trying to be gritty—hey, “Gears” is gritty too—“UT3” ended up losing so much of what made the previous game so fun.

And that’s what “UT2K4” is all about—fun. So fun it’ll make you foam at the mouth, though you might chalk that up to how stupidly fast the game is. Either way, grab it on GoodOldGames.com DRM-free for just $10, and treat yourself to something Unreal.