Today’s art game selection is brought to you by Roger Ebert, whose latest post on his blog is titled “Video games can never be art.” Oh Roger, you make me feel like a rebel already. Regardless of whether the world’s leading film critic believes games can be art or not—just what is art, anyway?—I still think it’s well worth your time to hunt down these games and play them. So far I’ve already written about “Passage” and “Today I Die,” two games that I would qualify as emotionally touching, and today I welcome “Small Worlds” into their ranks. 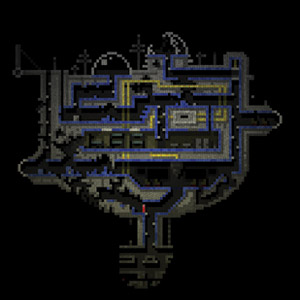 What’s all this? A platformer? “Small Worlds” belongs to that most Mario of genres, and it’s probably the closest thing to an “actual” game I’ve covered so far. As seems to be standard for these types of games, it has minimalist pixel art—your character is a measly 3 pixels tall—and some rather lovely music. What makes “Small Worlds” so special, however, is that it does exploration and narrative better than most of the uber-budget games on the market.

“Small Worlds” starts with a flash. The music is haunting, and the camera begins tightly zoomed in on the strangely oversized 3-pixel hero surrounded by darkness. There are traces of some sort of environment around him, but it’s obscured by both the darkness and the claustrophobic camera. Forging into the shadows reveals more of the environment, and as you continue exploring, the camera zooms out to show the “lit” portions of the screen. As you wander around the gloomy environs, the zoomed-in camera that made your character take up so much of the screen is pulled back more and more until your character is nothing but a tiny speck in a fully explored space station.

So it was a space station your character was left in. An abandoned one, at that. A bit more exploring and the hero discovers something suspicious—a pulsing white door? He walks in. Another flash. The music has changed, the camera has zoomed in again and the world is covered in darkness. It’s another world altogether—there are trees and snow, but still no people. The music is no longer haunting, but rather soft and lyrical. There are also underground tunnels and a room below the surface with a tiny world map. Bright yellow pixels dot the map—cities? Then, in the next room, missiles.

Suddenly, the map, the snow, the emptiness…It all makes sense: nuclear winter. But was this planet Earth? What had led to the catastrophe? Our 3-pixel protagonist finds his way to the surface again, hoping to find answers by chiseling away at the darkness. There’s a shining beacon in the distance. He reaches it and—a flash. We’ve returned to the space station. Three other doors await, glowing green, red and turquoise. Each door is a portal to another world with its very own story. I’ll leave the other three worlds for you to explore, though I will hint that the ending does justice to the game’s theme of insignificance in an appropriate manner.

Though it contains no dialogue, almost no text, and certainly no photorealistic facial expressions, “Small Worlds” manages to create a subtle, imaginative narrative that the industry at large could never pull off. It’s short, brilliant and minimalist to the max. But most of all, it deserves to be played.