Back to Neverland: AST’S ‘Peter Pan’ 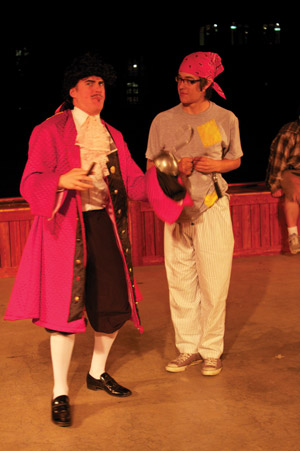 Captain Hook stole the show in All Student Theater’s “Peter Pan,” performed on the Quad.

I’ve always been one for going back to my childhood and enjoying the small things in life. I ended up loving “Alice in Wonderland” for the nonsense, but I never knew “Peter Pan” had so much of the same jolliness in it.

This weekend’s production is put on by All Student Theater, a group that  collaborates on one entirely student-produced play or musical each spring at Beaumont Pavilion in Brookings Quad.

Walking into the dress rehearsal, I figured that, because it was completely student-run, the production probably wasn’t everyone’s number-one priority. I was surprised at the extent to which the actors were invested in their roles, accents included.

The plot of “Peter Pan” is something I think most people are familiar with. The play follows the three Darling siblings, Wendy, John and Michael, as they go on an adventure to Neverland with Peter Pan. AST’s production is adapted from J.M. Barrie’s original version. The soul of this performance wasn’t so much in the plot itself as it was the way the actors take on the roles and interpret the script.

For me, Captain Hook/Mr. Darling and Tinkerbell took the cake, ate the pie, stole the show—you get the idea. Tinkerbell had to rely exclusively on her bell and facial expressions, which were perfect. The actor who played Captain Hook really got into the role. His actions and tone were what James Earl Jones’ voice was to Darth Vader. Spot on.

Even the music fit the mood and situations impressively. The composer layered the music so that no one instrument was completely overpowering. The costumes were well-designed, and they were all made by one person, which is amazing in its own right.

While the actors were great, there were elements in their performance that could have used more work. During the second half, transitions between the acts were a bit sloppy. Throughout the play, some of the actors who weren’t the main focus weren’t “in character.” At the dress rehearsal I attended, this is where the director came in: He had a good handle on the group, and when he gave feedback at rehearsals, the cast took it in stride.

In short, I could tell that “Peter Pan” was a student production, but I am blown away that students could organize something on this scale. When you go, make sure you read the director’s note and the rest of the program. The program will give you some insight into the process that the group went through. “Peter Pan” will probably be the best use of your 5 dollars in a while. Not to mention that you can take your pre-frosh to the show as well this weekend—“Peter Pan” is showing again Friday, Saturday and Sunday at 8 p.m.