Struc: An Art Exhibition on Construction/Deconstruction 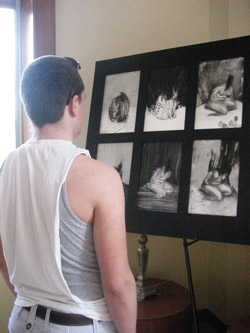 Earlier this month, Residential Area Real Art (RARA) kicked off “Struc: An Art Exhibition on Construction/Deconstruction” in the DUC Visitor’s Lounge. It will stay there until the end of the year, and I advise everybody who walks through the DUC’s front doors to check it out. And yes, damn the congestion, that includes tours. It’s that good.

As the title suggests, the exhibit focuses on the art of construction and deconstruction, and each artist has a unique take on concept.

Three pieces from Wendy Leitner show her wide range of artistic ability. First, there’s “All You Didn’t Find,” a piece as dark as they come, but with enough texture to get you wondering what the heck is going on in there. Her second piece, “Chasing a Truthless Ideal,” is thematically related to her first, but it evokes less curiosity, more wonder. The gold globs grip the frame like mushy spiders, creeping this way and that, punctuated by the black and red background. Leitner’s third piece, “Staged Coincidence,” is one of the most literal interpretations of the theme of construction and deconstruction. Pieces of a house curl through black space, connected by stringy material. The whole things resembles a whip, post-crack.

Moving on, Lauren Banka’s “Misprint I-VI” is a sight to behold. Banka turns two prints into six distinct drypoints, but they all portray the same black-and-white naked woman. The figure curls into a ball and lets the anxiety, represented by an etched, black mess that matches her head, play by itself in the sky. Each one feels like a misprint in two ways: first, each item feels incomplete, especially when the viewer is encouraged to see each piece in comparison to the other five, and second, one gets the sense that the figure in each tile feels like a misprint.

Joseph Rosenberg’s “But What if Time is the Illness” represents disease as a sequence of melting faces. They hang from the wall like big-game trophies. Elsewhere, Melissa Golance’s “Tree of Life” is made of curled wood, but you’d swear it’s made out of metal. There’s an organic quality to it, but it’s also undeniably mechanical: perfectly crafted. Golance takes on a huge concept and shrinks it down so it can fit atop a three-foot-high podium.

Elsewhere, Jennifer Baker’s “Lies My Truth” looks like a ransacked mattress, ripped to shreds for whatever was underneath. The physical presence of the upright mattress creates a daunting figure, making the image haunting. Pure white, except for some stains at the top, the mattress has tears in the middle that reveal the blood-red interior, which curls like wool.

There’s so much more to write about, but as with any good art show, there’s a lot more to say than can be said in one article. Check it out yourself in the DUC Visitor’s Lounge—it’ll be there until the end of the year. Take a look at what each artist has to offer. Once you see every piece in the gallery, you’ll know how everything fits together and how it all falls apart.