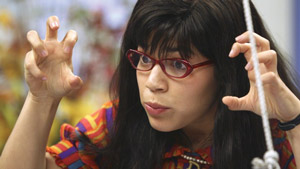 After four years of laughs, tears and braces, “Ugly Betty” is sadly coming to its end. While the series has certainly deteriorated since its award-winning first season, it has still managed to captivate millions with its intriguing and sometimes ridiculous storylines. With the end drawing ever-nearer (it’s tonight), let’s recap the last four years in the world of “Ugly Betty.”

Betty Suarez (America Ferrera) began as a fashion-sense-less, braces-wearing, frizzy-haired wannabe reporter who ended up as an assistant at the fashion magazine “Mode.” She didn’t understand fashion (at first), but she had enough heart and common sense to get her through. Over the years, she has grown, going through ponchos, boyfriends and schemes, eventually ending the series as a fashionable, braces-less editor at “Mode,” who is possibly going to run a magazine in London. Oh, how much has changed.

Throughout the lifetime of the show, Betty’s two families have been fairly constant. Her “Mode” family evolves over time from hostile to loving. Her boss, Daniel Meade (Eric Mabius), a pretty-boy who was given his job because of nepotism, becomes extremely capable both as editor-in-chief and as a friend. While co-editor-in-chief, Wilhelmina Slater (Vanessa Williams), never comes to like Betty, she at least starts to respect her by the end, which is really all one can ask of her. Meanwhile, catty office assistants Marc St. James (Michael Urie) and Amanda Sommers (Becki Newton) actually start to consider the once outsider their friend.

Betty’s biological family, on the other hand, hasn’t changed all that much. From the beginning, they loved and supported her, even if she did throw off their family balance. Her sister Hilda (Ana Ortiz), a single mom, has gotten married and is preparing to spend the rest of her life. Her nephew, Justin (Mark Indelicato), is a fashion-obsessed high schooler who recently came out of the closet (finally). Her father, Ignacio (Tony Plana), is overprotective but is finally learning to give his daughter some space. They are all learning to live without Betty to help them along, which makes it the perfect time for her to go to London.

Before the series ends, a few plotlines need to be wrapped up. While Betty’s biological family is in order and happy, her work family is still up in the air. In the final moments of the penultimate episode, a shot was fired near Wilhelmina, and it is unclear whether or not she was hit. Also near the end of the episode, Daniel and Betty exchanged looks hinting that maybe the finale will follow the original show’s format of the boss dating the assistant. In the end, will Betty be able to leave everyone behind and move to London to help her career? To find out the answers to all of these questions and to see Betty take her last breath on screen, tune in tonight at 9 p.m. on ABC.