Going above and beyond the ‘Call of Duty’ 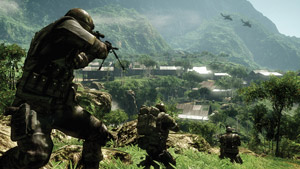 “Battlefield: Bad Company 2” solves both of those problems in a rather graceful manner by blowing stuff up. Thanks to its new-fangled Frostbite Engine with Destruction 2.0, fences collapse, walls shatter and entire buildings can be leveled with the proper amount of firepower.

Spot a bothersome sniper in a window? Destroy his cover by launching a 40mm grenade toward him; if he’s still alive, sprint through the smoking hole in the wall to finish him off. Road block in the way of your Abrams tank? You’re in a tank—run over it and you’ll leave a speed bump behind, if that. When “Bad Company 2” lets you call down a mortar strike on a house and watch the roof cave in on your latest victim, it’s difficult to get excited about being able to shoot through wood in other games.

It’s actually remarkable how almost every facet of the game’s multiplayer design comes together to encourage teamwork. Limited overlap between the four classes (assault, engineer, medic and recon) forces players to play to their class’ strengths or face the spawn timer. Agonizingly slow health regeneration makes it difficult to survive successive firefights without a medic nearby, and with the new destruction system, vehicles can easily dominate a disorganized team. Players are also assigned to four-man squads and can spawn on top of squad members, encouraging players to stick together and do their best A-Team impression.

All actions are tallied using a brilliant score system that grants points for healing, repairing and all other helpful actions. Suddenly, players are tripping over each other to drop health kits and repair vehicles, if only to boost their own scores. Points are tied to unlocks, making the system nothing short of inspired—what better way to guarantee cooperation than to appeal to gamers’ unnatural addiction to virtual items? The classes, the health system, the vehicles and even the way players spawn and score—it all meshes together to set “Bad Company 2” apart from the rest of its saturated genre.

Speaking of other games in the genre, as the “Call of Duty” series’ influence has drifted from “Band of Brothers” to Michael Bay, so has its multiplayer become increasingly focused on delivering a tight, arcadey experience with small player counts and accordingly small maps. “Bad Company 2” is none of those things, because it seeks to deliver something else entirely: war.

“Bad Company 2” is about sprinting toward an objective with your squad while mortar strikes rain death around you. It’s about walls being blown to bits around you when you least expect it, and it’s about the friendly soldiers you’ll shoot in the ensuing chaos. It’s about firing at tiny pixels from a helicopter, and the accompanying feeling of panic when the helicopter goes into a tailspin. With the destruction engine and teamwork mechanics in place, it can also be about doing blowing stuff up with friends. It’s war, and it’s what “Battlefield” does best.

There are few games out there that capture the intensity of war quite as well as “Bad Company 2”, and it’s in no small part due to the game’s exceptional presentation. Visibility is at a premium due to explosions kicking up copious amounts of dust and smoke, actually hindering visibility and affecting gameplay.

The fantastic visuals are outdone by the even more extraordinary audio, which is probably the most intense audio I’ve heard in any game. Sounds come in muffled and slowed when taking damage, fading back in as you recover health. Each gunshot contains more bass than the entire tracklist of Nelly’s “Country Grammar,” and the audio also takes location into account, so action from half a map away sounds dramatically dulled out compared to the razor-sharp thwip of a sniper round zooming past your ear.

For all the good times, it’s a shame that the multiplayer still has some glaring issues, technical and otherwise. The server browser, true to form for DICE, is a legitimate travesty. The developers must have overdosed on Swedish Fish the day they programmed the autobalance, because it doesn’t work. Like, at all. It’s not uncommon to find teams of 20 players steamrolling teams of 12. Throw in a hideously overpowered weapon for the medic and suddenly there are squads of zombie medics who can both bullseye womp rats and instantly revive each other. Luckily, fixes for all of these technical issues are currently in the pipeline.

Besides DICE’s inability to deliver a functional multiplayer game on release, “Bad Company 2” suffers from a few problems with its unlock system. Addictive as it may be, it’s an atrocity in its earlier stages, forcing players to unlock the most basic items. You won’t even be able to give ammo, repair vehicles or heal players without spending time leveling up each class individually. Though most weapons are a matter of preference, a handful are flat out superior to others, so expect your first few hours to be a frustrating experience playing against others with better gear.

In many ways, “Bad Company 2” is the next logical step for the modern shooter. In a setting that has already been done to death for multiplayer man-shoots, “Bad Company 2’s” destruction and teamwork elements put it head and shoulders above competitors. The Swedes have thrown down the gauntlet, and until another game answers the challenge, I’ll be waging war on DICE’s battlefield.