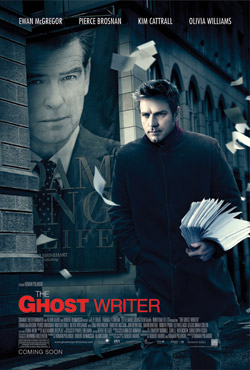 Roman Polanski’s new work, “The Ghost Writer,” is a suspenseful political thriller that engages and provokes the viewer throughout. The film has unfortunately gained notoriety because of Polanski’s legal troubles in Switzerland and the United States. Regardless of his past indiscretions, Polanski’s skills behind the camera are undisputed. He has directed masterpieces such as “Chinatown” and “The Pianist,” both of which were cinematic triumphs. While “The Ghost Writer” may not live up to its illustrious predecessors, it effectively demonstrates Polanski’s significant and well-honed filmmaking abilities.

The film focuses on the eponymous character, a nameless writer (played by Ewan McGregor) whose job is to “ghostwrite” autobiographies of famous people. His latest assignment is to edit and finish writing the autobiography of former British Prime Minister Adam Lang (played by a somewhat lackluster Pierce Brosnan). Lang’s tenure as prime minister was extremely contentious. It concluded with a forced resignation over his role in the wars in Iraq and Afghanistan. To escape the media frenzy surrounding his tenure, he and his entourage (including a fantastic Kim Cattrall as his loyal assistant and Olivia Williams as his wife Ruth) have escaped to a secluded seaside retreat in Martha’s Vineyard.

Even though Martha’s Vineyard usually conjures images of sunshine and beaches among well-manicured mansions, Polanski uses the island’s gray and desolate winter landscape to create a haunting atmosphere. This is fitting given the isolation and tension present between Lang and his entourage throughout the film. The Ghost enters this secluded and bleak world because the first ghostwriter mysteriously drowned while trying to complete Lang’s memoir. To add to this hostile environment, shortly after the new ghostwriter arrives, Lang is accused of committing crimes against humanity by The Hague.

This atmosphere continues to become more ominous throughout the rest of the film. While writing the memoir, the Ghost begins to uncover facts about Lang’s past that could have significant geopolitical ramifications. This leads him to begin an ad hoc investigation that could endanger both his life and Lang’s. This results in a suspenseful chase to uncover the truth before the publication of the memoir. But unlike many recent political thrillers, “The Ghost Writer” avoids becoming achingly predictable or impossibly convoluted.

The success of “The Ghost Writer” lies with Polanski, whose direction elevates the film. He is able to create a level of suspense and intrigue that differentiates “The Ghost Writer” from most other political thrillers. Even though there are consistently strong acting performances, especially those of McGregor and Cattrall, the true star of the film is Polanski. The sense of menace he creates out of the seemingly mundane task of being a ghostwriter for an autobiography is remarkable. There is seldom a moment when the film does not completely capture the viewer’s attention.