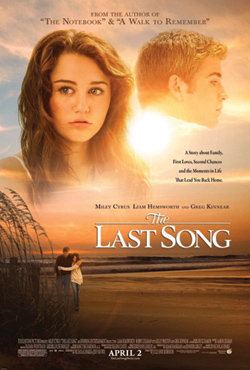 Society needs to stop encouraging Nicholas Sparks. In his latest effort, Miley Cyrus plays Ronnie, an angsty teenager forced to spend the summer with her father (Greg Kinnear) after her parents’ bitter divorce. Ronnie is a piano prodigy who is accepted into Julliard and reads Tolstoy but utters lines like, “Did you go to some nice guy school or something?” She resents everyone without justification and roams the Georgia beaches with a permanent scowl. Then, one day, her life is turned upside-down by Will Blakelee (Liam Hemsworth), hunky volleyball player and all-around good guy. Ronnie plays hard to get, but can’t resist Will’s charming persistence. From there, the romantic plot develops steadily and predictably.

As the debut for Director Julie Anne Robinson, The Last Song is lacking in both voice and imagination. There is no attention given to the composition of the frame or editing, which are equally rushed and sloppy. I noted several times where different takes of Cyrus were used without any attempt to streamline them. With the exception of Greg Kinnear, the acting is cheap and histrionic. Even Kinnear, a proven actor recognizable from his roles in As Good as It Gets and Little Miss Sunshine, cannot overcome the envelope-thin character development Nicholas Sparks offers. And for one of Cyrus’ largest roles to date, she does not impress. Her acting is showy and inconsistent. One minute she’s reserved, the next snarky, the next, bold and confident.

The film’s Achilles heel is Sparks’s transparent script. All of the characters speaks with Sparks’s voice, that of a Hallmark greeting card. Dialogue telegraphs characters’ thoughts and feelings, as if by self-narration. And for a film meant to focus on music, there is barely any emphasis on it: The soundtrack is decent, including a few songs from Jose Gonzalez, Feist and Iron & Wine, but the indie music choices clash with the melodramatic tone. There are a few scenes involving principal characters playing the piano which are deeply affective, and though I appreciated these scenes, I was not in tears, unlike the teenage girls in my row. The story’s problem was its inability to get to the heart of Ronnie’s resentment of her father as well as her personal insecurities. Had the story focused on Ronnie’s ambivalence toward being a piano prodigy or her inability to fill her father’s shoes, it would have been more interesting. Around the middle of the film, there is an offensively melodramatic turn, which left me groaning for the remainder of the movie.

The Last Song is poorly done, even for Nicholas Sparks. Its poor acting, lazy direction and derivative script make The Notebook look like Citizen Kane. The difference here is that Sparks authored this screenplay himself, whereas screenwriter Jeremy Leven adapted The Notebook to the screen. For all my criticisms of The Notebook (i.e. the misrepresentation of Alzheimer’s Disease), the dialogue and characters were profoundly more realistic than the hollow, clichéd nonsense in The Last Song. I would recommend this film if you hate yourself and don’t value your time.