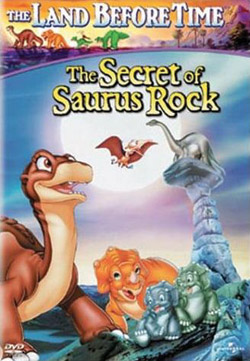 Ah, the land before time existed, home to various reptilian and pre-mammalian creatures, and fathomed by Steven Spielberg himself!

Hold on a second. Did I say “Steven Spielberg,” implying that this man, the creator of “E.T.” and so much else, had something to do with “The Land Before Time”?

Your eyes do not deceive you, dear reader. The original “Land Before Time” (1988) was produced by Steven Spielberg and George Lucas, directed by Don Bluth and even played in theaters! Six years later marked the onslaught of 12 direct-to-VHS copycat sequels that lacked the original creators’ participation. And they are certainly a force with which we must reckon. So, before we do that, let’s lay down the grounds for evaluation. The first “The Land Before Time” is ineligible for entry on the grounds that it is the granddaddy of all “Land Before Time” (LBT) videos and will most certainly monopolize first place. Because I cannot assume that every student has time to leisurely absorb 12 videos, I’ll constrict my review to the top five sequels.

5: ‘The Land Before Time XII:
The Great Day of the Flyers’
This jewel from 2007 makes it to the list simply because there is a feathery dude who shows up, doesn’t know what he is, thinks he is unique and draws a lot of attention to himself—and his name is Guido.

4: ‘The Land Before Time IV:
Journey Through the Mists’
This installment introduces Littlefoot’s lover, the beautiful girl-child longneck named Ali. A true love seed is sown as Littlefoot discovers his heterosexuality, and, even though Ali’s herd leaves the valley, we are left with the promise that she will one day be reunited with the gang. This never happens, so I assume she met a steamy end in lava soup somewhere and/or was eaten.

3: ‘The Land Before Time XI:
Invasion of the Tinysauruses’
Well, heck, who doesn’t love blaming everything that goes wrong on tiny people? The Tinysaursuses are LBT’s version of the scapegoat, as well as an indication that the writers’ ideas were running out by No. 11. These smallish Longnecks eat every single tasty “treesweet,” apparently having forgotten what they learned in kindergarten about sharing. In an effort to redirect the blame game to the appropriate party, Littlefoot takes the gang to see the Tinysaurs in their underground lair. Until this point the plot is rather dull, so why include No. 11 on this list? Well, here’s the kicker: The leader of the Tinysaurs is named Big Daddy. He’s bossy, ugly and tiny, but his big ol’ personality earns him that name. Big Daddy really saves this movie, which otherwise really has absolutely nothing else vouching for its legitimate existence.

2: ‘The Land Before Time VII:
The Stone of Cold Fire’
The writers really can’t take all the blame for LBT’s narrative restrictions. Indeed, they do a rather nice job avoiding the fact that all the little dinosaur friends could die at any minute, not from a Sharptooth, but from, say, a meteor shower. The stone of cold fire mentioned in the title is actually a meteorite. It is not dangerous—no, never that—but is something more along the lines of “magical” or “mysterious.” Some oldster in the valley is a bad, bad dino and wants to use the magic stone to take over the world. He doesn’t succeed and instead is banished. Seeing as no one gets blasted to bits or boiled in the volcano, I commend the writers for creatively avoiding the facts of science and history in order to keep things G-rated. (NB: remember the children next time you care more about fact than fiction.)

1: ‘The Land Before Time VI:
The Secret of Saurus Rock’
Of all twelve movies, why on earth does this one deserve the top spot? Taken in its entirety it could be outrun by one of its copycat counterparts, but one song in particular catapults it to the top. Always the optimists, the gang sings “When a Sharptooth finds you all alone that’s bad luck (bad luck!),”or my translation, “In the event that a Velociraptor attacks, it sucks to be you.” What a philosophy!