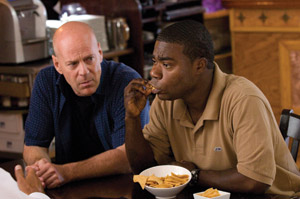 Kevin Smith has made his living in small increments. His movies, while never huge box office hits (which typically come with huge box office budgets), have gained him a strong following and modest gains. He seems to pump out comedies in his sleep, and they’re all hilarious and witty. Unless it’s “Jersey Girl,” which was not hilarious or witty (or good), but then again, nobody really talks about “Jersey Girl” anymore, so I won’t either.

So Kevin Smith makes great comedies, but does he make great satires? More on that later. With “Cop Out,” Smith has his biggest budget in six years (well, since “Northeastern Lass”), and what does he do with it? The answer is complicated, so let’s start at the simple end of things. “Cop Out” hired some star power. Tracy Morgan plays a less-than-serious cop named Paul Hodges, and Bruce Willis is the slightly-more-serious cop Jimmy Monroe.

In the words of a tagline, “Their methods are…unconventional.” In the film’s opening minutes, Hodges finds himself chasing a perp while dressed as a giant cellphone, with Monroe just behind the two, driving his dirty car. See, if Monroe were a serious cop, he’d keep his car clean. That’s how you know he’s only slightly more serious than Hodges.

Where does their goofy cop-bad cop dynamic fit in the pantheon of buddy-cop movies? Somewhere between Jackie Chan-Chris Tucker and Jackie Chan-Owen Wilson. Morgan and Willis are both too goofy to straighten the other one out, just like how we’re told that Chris Tucker is supposed to be the “crazy one” while we watch Jackie Chan smiling and beating up a guy up with his tie.

And now we get to the harder question: What does Smith do with his budget? The answer: you’ll laugh at the movie, but you won’t know why.

I want to assume I was laughing at a satire, because Smith has that “smartest-man-in-the-room” aura, but then again, when has Smith ever made a satire? It’s hard to tell what tone Smith is going for. It’s clearly a comedy, but at what level? Is it being straight with us? Is it ironic? “Cop Out” is unfocused, and the viewer can’t get a bead on the larger picture. One second, Willis will break down because he can’t pay for his daughter’s wedding, and the next he continues his quest for a lost baseball card.

For the sake of simplicity, let’s call it a sloppy satire. That being said, you will probably laugh all the way through. Morgan is funny as usual, but Seann William Scott steals the show as a thrill-seeking, dumb-as-rocks, parkouring criminal. Make sure to stay after the credits.