For that time in class: Our favorite internet games

I’m sure we all take school seriously, but there are some days when I don’t feel like doing work or I’m just too bored to pay attention. And on those days, I foray into the Internet in search of games to play to kill time between now and whenever my body shuts down. Here is a list of wonderful games that our Cadenza staff has played…I mean reviewed, so you can go straight to the good ones. 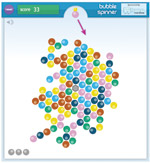 Steve introduced “Bubble Spinner” to me a week and a half ago. I’ve played it every day since. It’s had a crippling effect on my productivity. It’s actually quite a depressing story, starting when I first played the game. I got 100 points, then 125 points, then 200 points, but I could never get past the first stage. You see, “Bubble Spinner” is a little like “Snood” on an axis. You control a cannon and shoot colored balls at a mass of…more colored balls. Match three and they all come tumbling off the lump. The difference between this game and “Snood” is that every shot alters the orientation of the mass. There are physics involved, and every fired ball makes the larger mass of balls revolve around its center. There will be turns when you have to sacrifice a good yellow to rotate the mass a little to the left, so you can use a crucial blue. If you get rid of all the balls, you clear the stage.

And finally, after an hour of playing, that’s exactly what I did on my first day of playing “Bubble Spinner.” All the balls fell off, and I was on to the second stage. I made it all the way to 1,200 points. Feeling proud of myself, I boasted to my roommate. That turned out to be a mistake. Within three days, his high score was 4,800, and I was still at 1,200. But it’s completely unfair, because I’m playing on my laptop’s trackpad, and he gets to use a mouse!

You see what this game does to me? I’m so bitter, so angry, and I can’t seem to get a better score. My roommate and I call it the worst game ever, because you can never win. But then again, it always feels like you’re one move away from busting it wide open, so you keep on playing. That’s why we also call it the best game ever. (Percy Olsen)

Click to move forward. Click to not move forward. Click to go up. Click to go down. Click to shoot out your boomerang of death. Click to play “One Button Bob,” and prepare to do a lot of clicking. “One Button Bob” is a short platformer with charmingly pixelated Commodore 64-style graphics that is completely controlled by clicking the mouse. The twist is that clicking the mouse has a different effect on each screen. In one scenario you click as fast as you can to outrun a boulder, and in another you click to jump over maliciously placed obstacles. It has a great sense of humor, and the game counts the number of clicks it takes to finish to keep as a high score. The catchy extreme guitar music in the background is a plus. After you’re done playing, you’ll wonder why games ever needed more than one button. (Michael Yang)

If you’ve ever been playing a video game in which you’ve blown up an alien, drowned a viking or lit an evil cyborg on fire but thought, “I wonder how my gaming experience would be affected if all the characters were pill bugs,” then “Roly Poly Cannon 2” is for you. It’s all in the title: There are evil insects, and you destroy them with a cannon in various inventive ways. What’s not to love? (Steve Hardy)

It’s always fun watching a motorcyclist go off a few jumps on a BMX track. Just then, the 5-year-old inside us blurts out, “It could use more loop-de-loops.” With “Line Rider,” this power is in your hands. You draw a track that a sledder will ride down with as many flips, loops and jumps as you see fit before having him fall to his icy doom or crash into a shattered heap. There is a vibrant community dedicated to making the most insane tracks and decorating them so it truly looks like your sledder is on a great adventure. (Adam Rubin)

Directions: Bust large square into bits until it disappears. Play as often as needed. When the effects of “easy” become less potent, increase dosage.

Warning: “Square Divide” may inspire fits of unchecked passion and obvious inattention to other tasks. Other side effects include irrational frustration, obsession and withdrawal. (Ashley Adam)

This game has a little of everything—action, strategy, speed and the ability to annihilate peeping little creeps. Basically, there are a lot of evil “creeps” that you’re trying to stop from making it all the way across your desktop. To accomplish this, you build a maze of gun towers, which fire automatically when a creep gets in range. Different towers have different ranges, firing speeds and intensities, and there are also towers that can stun, slow down or lay traps for creeps. But the creeps themselves have different abilities—some can fly straight over your maze or split in half, and some are immune to freezing. And if 20 creeps make it all the way to the other end of the desktop before you damage them enough, that’s game over. Not recommended if you only have 20 minutes between classes—“DTD” is one of those games that will have you muttering to yourself about firepower as you plot the shape of your 12th maze. (Nora Long)

The original “Super Mario Bros.” is one of the most highly regarded video games of all time. Each playthrough is both fun and exciting. But many often find themselves wondering, “What if the Super Mario brothers and all of the supporting characters were morbidly obese?” This game answers that question and more! (Adam Rubin)

“N” combines simple design with demanding game mechanics. The hero, a ninja with superhuman speed and gravity-defying leaps, establishes a new standard in flash platforming. The objective is straightforward: Reach the goal within a time limit while avoiding enemies and jumping carefully, lest a misstep kills you. The game has 150 stages scattered with a few golden blocks to prolong life. Despite the easy preliminary levels, the stages quickly become impossible. I have played this game off and on for three years but only cleared about half of the levels. Precise reflexes are a must. Though occasionally frustrating, “N” wastes time admirably. (Davis Sargeant)

Miniclip was the greatest Web site in the world throughout our high school tenures. The crown jewel in their collection of games is “Bubble Trouble.” Similar in concept to “Asteroids,” this game requires the player to shoot grappling hooks at giant bouncing bubbles, causing two smaller bubbles to emerge. To eliminate them all takes finesse, speed, planning and lightning-fast reflexes. Expect countless hours to fly by while you play. (Adam Rubin)