A case for Japanese RPGs 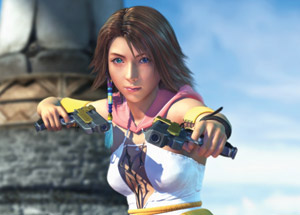 “Final Fantasy X-2,” which only has female playable characters, won over skeptical fans with its dynamic remix of the Active Time Battle system. (Courtesy of Square Enix)

There are a lot of things in life that I am passionate about, but few get my blood boiling as much as the fight over which type of role-playing game (RPG) is better. You see, there are the classic Japanese role-playing games (JRPGs), and then there are Western role-playing games (WRPGs). Games included in the JRPG section are the “Final Fantasy” series, the “Zelda” series, “Kingdom Hearts,” “Dragon Quest,” “Pokémon,” “Chrono Trigger” and many more. On the WRPG side are “Mass Effect,” “Oblivion,” “Fallout 3,” the “Diablo series,” “Baldur’s Gate” and “Knights of the Old Republic.” My friends and I argue about which is better at least once a month, and I think it is time I wrote down my side. If you want to read the counterpoint, please see Mr. Yang’s article, but if you want to really know which type of game is better, please read on.

End of Disc 1 of FFVII

One of the major differences that helps classify JRPG versus WRPG is the linearity of the story. WRPG stories are very nonlinear, and JRPG stories are linear. I actually enjoy this linearity. A linear story line lets you see all that the game has to offer in one go. You start the game, events happen in a certain sequence, usually tons of extras are unlocked that you can either get or not get, you beat the game, and you are done, having had the chance to see everything in the game. This is great! I don’t want to play a game that makes me play through multiple times just so that I can unlock all the fun extras. I honestly don’t have the time. I basically have to play each WRPG about 50 times to create 50 slightly different main characters that each lead me to unlockables that aren’t that fun in the first place.

Some people say that the JRPG’s linearity makes it hard for the gamers to connect to their characters. My response: Have you played a decent JRPG? Have you ever gone through “Final Fantasy VII” and not teared up at the end of disc 1? Have you made it to the end of “Final Fantasy X” and not felt yourself die a little after you see what happens? JRPGs normally have amazing story lines.

Let’s take a classic, “Final Fantasy VII,” which has, in my opinion, one of the best story lines ever written for a game. This was a story line so powerful that you felt in tune with Cloud as you made your way through this amazing game. You felt compelled to save the world from the evil that was Sephiroth. Has there ever been a memorable WRPG final boss? I can only think of the final battle in “Diablo,” but the game is named after him, so that doesn’t really count. Sephiroth of “Final Fantasy VII” will be imprinted in my memory until I die because the story line was so powerful.

And then there’s gameplay. In JRPGs a player normally has to level up the character to gain certain stats (exceptions are “Final Fantasy Tactics” and “Final Fantasy VII,” among others). In WRPGs, you usually get to pick which skills and abilities your character is going to earn with each successive level (think “Dungeons & Dragons”), but I actually don’t enjoy this control. Every game is different, so I don’t know which skill sets I will need for WRPGs. This really makes me mad because I usually end up blowing critical skill points on stuff that I don’t end up needing. With a JRPG, I level up and I get a new set of stats predetermined by the game. I love this because it takes less time, and I can’t really screw up my characters. ‘Nuff said.

There is also the issue of balanced parties. In a lot of JRPGs, you can put multiple characters in your party from different character types, such as fighters, mages, healers and so forth. In WRPGs I usually end up being stuck with one character who, because I normally play as a fighter, can never quite heal himself fast enough. You can hire non-player characters (NPCs) in WRPGs, but they are usually ineffective.

Some people complain that the gameplay in JRPGs is the same across the board. Statements like these lack knowledge and call upon false stereotypes. Just look within the “Final Fantasy” series, and you will see a plethora of gameplay types and story lines. Yes, the battle menu has stayed consistent over the years, but little else has. They all have different battle styles, summons are always called in different ways, the ways that you unlock abilities are drastically different, and all of the games just have different feels to them. I am sorry, but switching from “Morrowind” to “Oblivion,” all I noticed was a graphics update.
Finally, JRPGs make up some of the most respected games today. “Final Fantasy VII,” “Deus Ex” and “Ocarina of Time”—all three of these games have been declared the best games on their respective consoles countless times.

In conclusion, just remember that linearity is good, that JRPGs have some of the best story lines ever, and that WRPG gameplay can’t compare to the amazing gameplay of JRPGs. Have fun saving the world!