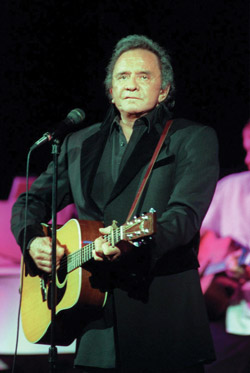 Everybody likes Johnny Cash. Country fans and folk fans both claim him as one of their own. Fans of hard rock and metal relate to his outlaw persona, while ivory-tower music scholars see him as one of the most important figures in American popular music. Conservatives appreciate his Christian traditionalism, while liberals latch on to images of him flipping the finger to anyone who cares to judge him. Somehow, Cash manages to embody and appeal to all of America at once, while tactfully avoiding alienating any one group. He is the only pop icon who can both stick it to The Man while being The Man, without seeming the least bit hypocritical.

My recent fascination with Johnny Cash has come from discovering his “American” series of recordings, a group of his final few albums that were recorded in the years before his death in 2003. Cash uses a deceptively minimalist approach on these albums that are filled mostly with covers of songs by bands running the gamut from Nine Inch Nails to Depeche Mode, and he uses sparse instrumentation throughout—usually just him and his guitar with the occasional left-hand piano bass line. But don’t be deceived; the songs are loaded with more raw emotion and musicality than most performers ever manage to distil onto a record. His lone dreadnought guitar accompaniment sounds like an orchestra; his voice warms up a room, sounding like aged leather dripping with Kentucky bourbon.

As usual, Cash wears a plethora of hats on the album. On some tracks, like his version of Tom Petty’s “I Won’t Back Down,” he sounds like an elder statesman of the music scene, reflecting back on his career while defiantly looking to the future. On others, like his rendition of Sting’s “I Hung My Head,” he showcases his masterful storytelling, turning Sting’s world music tune into something that sounds like sacred American folk music, passed down a line of cowboy-minstrels over the centuries. Cash’s storytelling magic lies in his ability to make you forget that it’s actually Johnny Cash who is singing—for a few moments you feel like you’re actually listening to a man who shot a lone rider out on the plain on a whim early one morning.

Perhaps my favorite of all the roles Cash plays on these records is that of an old-time southern preacher-man. In a rare original song, “The Man Comes Around,” he uses his patented spoken-word vocal delivery to warn you of the impending Armageddon, but you don’t feel like he’s trying to save you or deliver any form of salvation. Instead, he just tells it like it is, preaching plainly and simply that “everyone won’t be treated all the same.”

And maybe that’s why anyone can feel like Johnny Cash relates to them. He tells it like it is, but he’s never out to change who you are. He can be empathetic toward criminals in one moment, hardened and callous toward sinners in another. But he’s always sincere, and he always has your best interests at heart. He’s the very salt and dust that America is made of—inconsistent and perpetually at war with himself—but always possesses a rebellious spirit with a steady eye on the horizon.