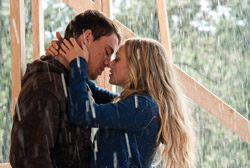 The first time I saw a preview for the new movie “Dear John,” I wondered why they would name a supposed love story the term used for break-up letters. All throughout the preview, the main female character, Savannah (Amanda Seyfried), writes letters to her army boyfriend John (Channing Tatum), all beginning “Dear John.” As could be expected, the title—and the use of this line—foreshadow a major plot point.

Rewinding back to the beginning, the movie starts as John meets Savannah on a beach in North Carolina, while she is on spring break from college and he is on leave from the Army. The two have an intense love-at-first-sight, two-week romance, after which they go back to college and the Army, writing numbered letters back and forth. After 9/11, John decides to re-enlist into the Army, devastating Savannah. A while later, she stops writing to him, leading up to her real “Dear John” letter. After the letter, the story continues to unfold its twists and turns, leading up to a fairly predictable romantic-movie ending.

Being someone who has seen parts of Nicholas Sparks’ (the writer of the book that inspired the movie) biggest hit movie, “The Notebook,” I wasn’t expecting much out of this one, except maybe some unintended laughter. “Dear John” managed to exceed those modest expectations by a few baby steps. The plot of the film was predictable, over-dramatic and cheesy. The script was equally dramatic and sappy but wasn’t as awful as would be expected.

One aspect of the film that was surprisingly good was the acting. It’s true that Seyfried has already proven that she can act well, as she does in “Big Love.” For her, it wasn’t as much of a surprise that she could successfully bring her character to life without being over-the-top. Tatum, on the other hand, had not previously shown any of his real acting skills, appearing in “Step Up” and “G.I. Joe.” He was much more convincing in the romantic lead role than I had thought he would be. He shows that he is more than just dancing, gun-slinging eye candy; he is a real actor.

The movie itself is also unexpectedly well made in its cinematography and editing. It may not be award-worthy, but it is certainly artistically driven, a feature not usually seen in romance movies. Also positive is its inclusion of intense emotional issues, like war, cancer and Asperger’s syndrome. By far the most emotional of these stories is the subplot of John’s father, a coin collector who lives by a strict schedule. When Savannah tells John that she thinks his father has autism, he overreacts, reverting back to his violent past. As the film continues, John comes to terms with what Savannah says and tries to help his father any way he can, a storyline which really allows Tatum to show some of his acting range.

“Dear John” is not bad, by any means. It is entertaining, well acted and well shot. In no way will it be everybody’s cup of tea, but its sappy love story isn’t overpowering enough to turn most away. In the end, the movie is what it is supposed to be: a dramatic “chick flick” that will no doubt have some viewers in tears.