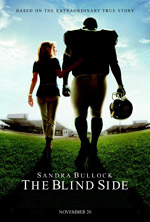 Oscar nominations were announced Tuesday morning with only a few surprises. Unfortunately, none of the potential nominees that I made cases for actually made the cut, but one of my “Also considers” made it in: Maggie Gyllenhaal for Best Supporting Actress in “Crazy Heart.”

By far the biggest surprise nomination was “The Blind Side” for Best Picture, thankfully displacing assumed nominee “Invictus.” This nomination for the inspirational football film was fairly logical, given the large support for its lead performance by Sandra Bullock and the amount of money that it has made in the box office. “A Serious Man” also made it into the top 10, ousting “Star Trek,” although those two movies were already fighting for that spot.

Another surprise came with an Adapted Screenplay nomination for “In the Loop,” a little-known but hilarious comedy. It’s surprising that “Fantastic Mr. Fox” didn’t snag a nom, but hey, “Loop” is deserving.

For a full list of nominees, be sure to check out www.oscar.com.