In defense of My Endless Love for the Disney Channel 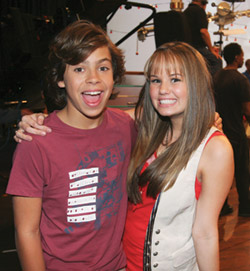 Justin T. Austin and Debby Ryan pose backstage during a filming of “The Suite Life on Deck”. (MCT Campus)

So the title pulled you in, and I have just one favor to ask. Please just finish reading this article. You have probably noticed that, yes, I am a guy; yes, I am in college (and I am not some super-smart 8-year-old—I am 20); and yes, I just made the claim that I watch the Disney Channel. I know that you are asking yourself: “What?! Is this guy even sane?” Yes, I am—mostly­—and I would like to prove it to you.

The Disney Channel is known for being just plain bad. Please note, I did say Disney Channel and not Disney movies, which are actually good creations that are loved around the world for good reasons. On the Disney Channel, everything from “Hannah Montana” to “The Suite Life on Deck” is just another ploy for Disney to gain even more money while expending less and less. The exact same plots are used for different shows. I don’t know how many times I have seen Disney Channel show characters break into the White House, or break something in a museum or any one of 25 plots that involves them doing something stupid and not really getting in trouble. I understand that the Disney Channel is not original in the least. And yet I still watch it.

I am one of those people who become tired of thinking after a long day of school (or after a few tests on the same day). I get back after my 10-hour day, and I don’t want to have to think. This is where the Disney Channel comes in. I can honestly just sit down, flip on Channel 55 and proceed to not stimulate my brain for the next hour or so. This is great! Nothing else I know can do quite this. Say I start watching a comedy on another channel. I usually do not get blatantly obvious clues that a joke is supposed to be funny and therefore laughed at. The Disney Channel uses laugh tracks and only pushes approximately one joke a minute at me so that I can actually get it. Plus, Disney doesn’t really try to be clever, which would make me think even more. The Disney Channel uses one-liners and physical pain to let you know that “this is funny, please laugh at us, we are being stupid just for your general amusement.”

But what about video games, you say? Couldn’t I just pull up a video game and proceed to not think? Not really. If I am to the point where I am watching the Disney Channel, I usually don’t even want to pick up a controller, as that would just be too hard!

I am not advocating watching the Disney Channel if you are not in a mood in which you don’t want stimulation. Trust me: Bad things can, and will, happen (think of you becoming a zombie and drooling all over the place). But, if you ever just want to get away from of the buzz of school, honestly consider the Disney Channel as a good alternative to thought.