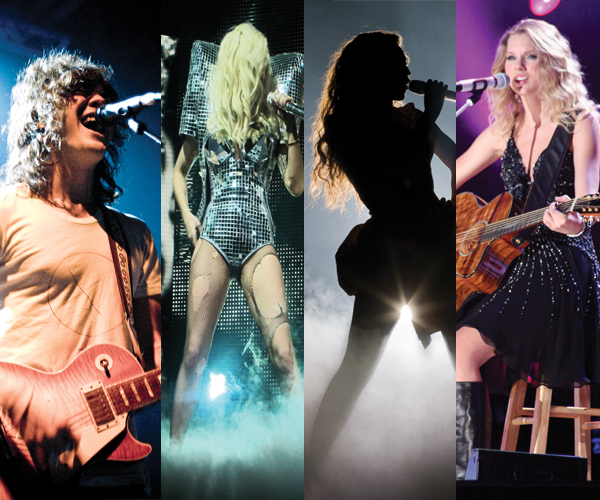 Record of the Year

Percy: Alright, let’s start at the top. Record of the Year?
Cici: I so want to say Lady Gaga, but “Bad Romance” is clearly her finest work. I’m throwing in for T-Swizzle.
Percy: I want to give it to Taylor, I really do. But Lady Gaga came first, before all of this “You Belong with Me” and Kanye’s disrespect.
Cici: And she completes you?
Percy: And yes, she does complete me. Even if she loses on Sunday, I’ll still have a home for her in here (points to his heart).
Cici: I’ll give bonus points for the hairbow, but “You Belong With Me” is better than “Poker Face.” Except when read by Christopher Walken.
Percy: Or Cartman.
Cici: Or both! (Note: Call record label. Ask about supergroup possibilities)

Should Win: Taylor Swift, “You Belong With Me”
Will Win: Lady GaGa, “Poker Face”
Other Nominees: Beyoncé, Black Eyed Peas, Kings of Leon

Album of the Year

Percy: Album of the Year?
Cici: “I Am… Sasha Fierce,” hands down. It’s Beyonce’s best work by far. There are too many good singles, and let’s be honest: our culture will be judged by future civilizations based on the “Single Ladies” dance.
Percy: Oh hold on.
Cici: (Just please don’t say Dave Matthews. Then we can’t be friends anymore)
Percy: Ha, please, I’m not my mom.
Cici: ZING!
Percy: I’m going with “Sasha Fierce” too. Like I told you earlier, I’m not a single lady myself, but I know exactly what Beyonce is talking about. Also, just think about “Sasha Fierce.” One artist. Two personalities? It’s like an Oscar for Best Supporting Actress wrapped in a Grammy.
Cici: This is why we’re friends.
Percy: And who do you think will win?
Cici: Beyonce, no problem.
Percy: Yeah, this category is sort of a wash.
Cici: It’s not our bad we’re crazy in love with her.
Percy: Whoa, nice reference.

Cici: Mmkay, best new artist?
Percy: Yes, or as it’s always been known, “That Crazy Category.” Are any of these bands actually new?
Cici: Haha, no! God, how long has MGMT been at it?
Percy: I looked it up using Cadenza’s Super Computer. Which took me to Wikipedia, where I found out they formed in 2002.
Cici: Back when they were still The Management?
Percy: Yup. Maybe the Grammys just got confused after they changed their name.
Cici: Wouldn’t surprise me! Hold on. All-knowing and all-seeing Cadenza Super Computer, when was the Ting Tings’ iPod commercial?
Percy: Let me see… It just sent me a fax: “May 22, 2009, but don’t hold me to that.” Well, that’s interesting.
Cici: That is! The fact that none of the best new artists are new aside, who do you think should get it?
Percy: MGMT, because psychedelic rock never gets old. Also, MGMT made me love “Sex Drive,” and it was not a good movie.
Cici: Haha, I’m not 100% sure about that. And does anyone know any songs besides “Time to Pretend”?
Percy: Uhh, err, welll… who do you think should win?
Cici: The Ting Tings. They’re beyond catchy, and “That’s Not My Name” on repeat got me through finals. (I should also mention that I love Silversun Pickups, but I saw them right after Snoop Dogg at Lolla, at which point I loved everything.) Hey look, it’s Steve!
Steve: The Silversun Pickups are so hip that I’m almost afraid not to pick them. Oh, plus they deserve it.
Percy: Wow. That’s a lot better than my reasoning. But I’m not changing. Hey, where’d Steve go?…
Cici: Fair enough. I should admit that I’m very impressed by MGMT’s achievement. “Sex Drive” was terrible.
Percy: I think that’s something we can both agree on. I can’t believe I gave that four out of five stars.
Cici: We were young and naive. Don’t feel bad. It takes time to become the jaded, world-weary consumers of pop culture we are now.
Percy: Ah, College.
Cici: (Heavy sarcasm? Draw your own conclusions!)

Percy: Right on. OK what’s next? Best Female Pop Vocal Performance. That’s a mouthful.
Cici: Too true. I adore Pink, and “Sober” is one of her best. The Grammy should be hers, but Taylor’s probably gonna take it.
Percy: Taylor Swift should send Kanye something for his birthday, seriously.
Cici: Also, anyone that can turn one breakup into both “So What” AND “Sober” deserves a small parade. Look, Steve’s back!
Steve: I want Ms. Swift to win. She’s the 2009 Shania Twain. Or the 2009 Dixie Chicks if they were hotter, more accessible and better. This is a terrible metaphor…
Percy: That’s weird, he disappeared again. By the way, have you ever heard Katy Perry perform live? She’s awful.
Cici: DON’T REMIND ME I’D REPRESSED THAT.
Percy: She’d probably win Best Female Studio Award, Best Editing, Best Cover-Up…
Steve: I’d answer, but I’m too busy singing along to Hot N Cold in my head.
Percy: What? Where’d you come from? And now he’s gone again. STOP HIM.
Cici: And she just got engaged to Russell Brand! Grammys are the least of her worries.
Percy: Wow I forgot about him.
Cici: Didn’t we all…
Percy: Maybe if she and Zooey Deschenal could do a switcheroo, things would be right again. I’ve seen Elf. Zooey can sing.
Cici: (Katy’s also in for Best-Now-I-Can’t-Use-Cherry-Chapstick-In-Public-You-Jerk.)
Percy: (It’s good to see that you’ve gotten over your repressed memories.)
Cici: (They’re down there pretty deep.)
Percy: (I want to turn that into a “that’s what she said,” but it’s just not working.)

Should Win: Pink, “Sober”
Will Win: Taylor Swift, “You Belong With Me”
Other Nominees: Katy Perry, Adele, Beyonce

Percy: I’m a horrible editor. I haven’t listened to any of the Best Pop Vocal Albums.
Cici: Yikes. This is why you keep me around.
Percy: Do the albums really need to contain 51% or more playing time of vocal tracks?
Cici: Oh yes, they’re very picky about that 1%. It’s not something to be taken lightly.
Percy: Wow, Grammys = Serious Business. Who knew?
Cici: This one should and will be Pink. God knows she deserves it!
Percy: I agree with you…but only because your opinion is the only one I’ve heard. And that’s good enough for me!
Cici: Chalk another point for meeeee!
Percy: Wait, we’re keeping score?

Cici: Best Rock Song?
Percy: I thought it would be “21 Guns” for me…
Steve: Shut up, Percy, don’t let Green Day and their two chords win.
Percy: What? Who said that? You know, I just can’t stand…
Cici: I should preface this by saying that Green Day is my favorite band of all time, but “21 Guns”was my least favorite off the new album.
Percy: …75% of that album.
Cici: So I’m crazy torn.
Percy: Really?
Cici: WHAT?!?!
Percy: Ahahaha, hold on. This just got serious.
Cici: PERCY, THIS PUTS A SERIOUS STRAIN ON OUR WORKING RELATIONSHIP.
Percy: I don’t want to sidetrack the debate…but “21 Guns” was your least favorite?
Cici: Yeah, it was! With the possible exception of “Last of the American Girls.”
Percy: Are you on some sort of crazy drug?
Cici: Don’t they screen for that when we hire editors?
Percy: Yes, but we don’t test for the harder stuff. So you don’t want it to be “21 Guns” (even though you do).
Cici: Yeah… I’m voting for it anyway.
Percy: Oh great. I thought we were going to have a problem.
Cici: Heavens no! I liked “Use Somebody,” but I can’t desert GD.
Steve: “Use Somebody” was perhaps the best single on a stellar album. The only knock against it is that even such a good song as this can be overplayed.
Cici: I think Steve is some sort of ghost.
Percy: Yea, I don’t think I can vote against a band I saw in concert last summer.
Cici: I knew there was a reason we were friends. (Just kidding, there are many.)
Percy: (What a combo we make.)

Cici: So I bet you can predict my answer for Best Rock Album?
Percy: Um, let me see….Wait, could it be…Green Day?
Cici: 100 points!
Percy: Strangely enough, I want U2 to win. And I didn’t see them in concert.
Cici: Really?
Percy: Yeah…
Cici: Explain yourself!
Percy: Look, “How to Disassemble an Atomic Bomb” was sort of a disaster for me.
Cici: And for everyone else involved.
Percy: But “Vertigo” was awesome…
Cici: …counting aside…
Percy: …but then everything else…meh. And that made “Vertigo” not so awesome.
Cici: Very true.
Percy: Reason number catorce I like “No Line on the Horizon” is that it just feels epic coming out my iPod.
Cici: “American Idiot” changed music history, and then they did it AGAIN. None of this slump-and-then-redemption nonsense.
Percy: Hey, keep on believing that. I’m just supporting the BEST BAND IN THE WORLD, that’s all.
Cici: You impugn my honor, sir. You really do. (You ignorant Philistine.)
Percy: God, I really hate it when people call me that.

Cici: Alternative music is kind of a wash—it’s gonna be Phoenix, indie hipsters haven’t been this excited about a band since the Arcade Fire.
Percy: Oooh, ooohh! I know who Arcade Fire is!
Cici: Percy Olsen: Best Senior Cadenza Editor Ever.

Best Rap Song
Should win: Drake, “Best I Ever Had”
Will Win: Jay-Z, Rihanna & Kanye West, “Run This Town”